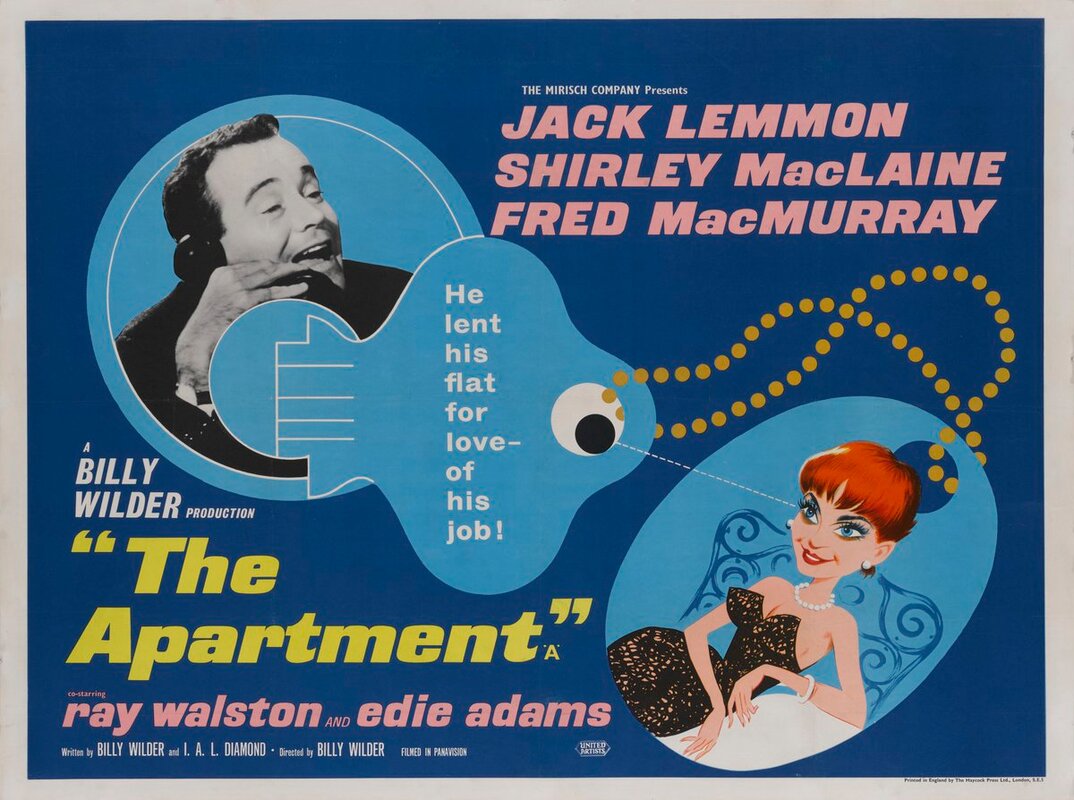 Set in New York City, The Apartment follows C.C. Baxter (Jack Lemmon), a lonely, low-rank number cruncher at Consolidated Life Insurance, where he sits amid a sea of similar droids, all cranking out facts and figures until their shift is over at 5:20. But Baxter often hangs around for a few hours more just waiting for the commute to be less crowded, but the real reason is that he's been loaning out his 67th Street apartment in the evenings to three of his office superiors - Mr. Dobsich (Ray Walston), Mr. Eichelberger (David White), and Mr. Vanderhoff (Willard Waterman) - who use it as a safe place to conduct their extramarital affairs. In return, they dangle the carrot of a promotion in front of Baxter, who feels put-upon but sees the whole arrangement as a way to possibly rise quickly through the ranks. He's also developing quite an inadvertent ladies man reputation with his Jewish neighbor, Dr. Dreyfuss (Jack Kruschen), who hears girls coming and going - but mostly coming, if you catch my drift - every night of the week. Baxter later gets a big leg up - a new position, and an office with a view - after the company's womanizing head honcho, Mr. Sheldrake (Fred MacMurray), catches wind of C.C.'s apartment operation and bargains for exclusive use of the bachelor pad. What Baxter doesn't know, however, is that Mr. Sheldrake's current mistress is the very same elevator girl, Fran Kubelik (Shirley MacLaine), for whom Baxter himself has developed a sizable crush.
Immediately following the success of 1959's Some Like It Hot, director Billy Wilder and screenwriter I. A. L. Diamond had interest in making another film with actor Jack Lemmon. The idea for this movie came from David Lean's 1945 film, Brief Encounter, where two characters met for a thwarted tryst in an acquaintance's apartment. In making that concept their own, Wilder and Diamond took ideas from a Hollywood scandal in which high-powered agent Jennings Lang was shot by producer Walter Wanger for having an affair with his wife, actress Joan Bennett. Another aspect of the plot was based on the experience of one of Diamond's friends, who returned home after breaking up with his girlfriend to find that she had committed suicide in his bed.

After having had its world premiere in New York City over two weeks earlier, The Apartment was released in movie theaters nationwide on June 30th, 1960. Despite some controversy surrounding its subject matter, the film became quite a commercial hit grossing over $24,600,000 at the worldwide box office on a budget of $3,000,000. On April 17th, 1961, The Apartment won 5 Academy Awards for Best Picture, Best Director (Billy Wilder), Best Original Screenplay (Billy Wilder & I. A. L. Diamond), Best Art Direction-Black & White, and Best Film Editing.
Though one award in particular that the film was expected to win was Best Actress for Shirley MacLaine. The winner that year very (in)famously ended up being Elizabeth Taylor for her performance as a prostitute in the much reviled Butterfield 8. She had won the Oscar pretty much as sentiment for all the trouble she went through during the making of that movie as well as how she was hospitalized with pneumonia during awards season. In response to that, Shirley MacLaine joked “I lost to a tracheotomy.” In the years since, Elizabeth Taylor admitted how much she hated Butterfield 8, her performance in it, and her first Oscar win. As for The Apartment, the film has gone on to be regarded as one of the greatest movies of all time and has even spawned a 1968 Tony-winning musical titled Promises, Promises.
Proudly powered by Weebly
KARE REVIEWS