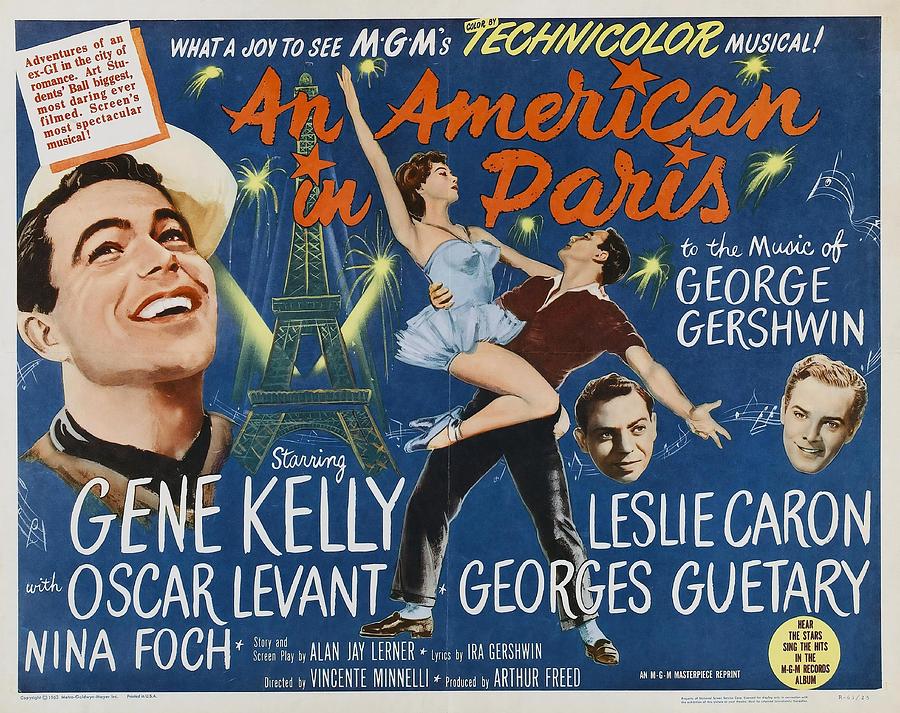 Inspired by George Gershwin's 1928 orchestral composition of the same name, An American in Paris follows a former United States Army soldier named Jerry Mulligan (Gene Kelly) who decides to take up residence in France at the end of WWII and live out his life as a Parisian artist. While there, he has to navigate the affections of a wealthy American patron named Milo (Nina Foch), inadvertently falls in love with a beautiful young perfume-shop clerk named Lise (Leslie Caron), and struggles with the knowledge that she is engaged to an older man (Georges Guétary). When each person's feelings are eventually revealed, the lovelorn individuals have to come to terms with the truth of their situations.
Producer Arthur Freed got the idea of for this film when he attended a Hollywood Bowl concert presentation of George Gershwin's music from the Jazz Age. He was particularly inspired by the 'An American in Paris' number which Gershwin had composed in 1928. Freed originally just wanted to buy the rights to that song, but George's brother, Ira Gershwin (who was in charge of the former's estate since his death in 1937), said he'd only sell on the condition that if a musical were to use the number it would use only Gershwin tunes as its other songs. With this project, Arthur Freed saw the chance to combine two of his personal favorites, the music of George Gershwin and French Impressionism. Over the next three years, he discussed ideas with filmmaker Vincente Minnelli, screenwriter Alan Jay Lerner, actor/choreographer Gene Kelly, and musical director Johnny Green. Alan Jay Lerner began writing the screenplay in December 1949, and finished it in a 12-hour stretch on the night before his wedding in March 1950. Despite the objections of Gene Kelly, who wanted to shoot on location in Paris, France, the movie was shot at MGM Studios in California on 44 sets that were built specifically for it. The studio reportedly found it difficult to secure travel arrangements or locations for shooting. Production designer E. Preston Ames had actually studied in the French capital and knew the city of Paris well. Though upon seeing the sets, Gene Kelly nonetheless believed they looked like unconvincing sound stages. Only two shots in the movie are from Paris, but they don't involve Kelly.

​After premiering in London about two and a half months earlier, An American in Paris was released in movie theaters nationwide on November 11th, 1951. On a budget of $2,700,000, it was able to gross over $7,000,000 at the worldwide box office. On March 20th, 1952, the film ended up winning 6 Oscars for Best Picture (becoming the second technicolor movie to have prevailed here following 1939's Gone with the Wind), Best Original Screenplay (Alan Jay Lerner), Best Art Direction-Color, Best Costume Design-Color, Best Cinematography-Color, and the now-retired category of Best Scoring of a Musical Picture. The only two awards it didn’t win were Best Director (Vincente Minnelli lost to George Stevens for A Place in the Sun) and Best Film Editing (which also went to A Place in the Sun). Not to mention that Gene Kelly received an Honorary Oscar that night for his versatility as an actor, singer, director, dancer, and specifically for his brilliant achievements in the art of choreography on film. When An American in Paris won Best Picture, MGM was surprised. As a result, the studio took out a full page ad in Variety with their mascot, Leo the Lion, looking chagrined and sheepishly admitting: "Honestly, I was just sitting in the sun, waiting for a streetcar."
1952 also marked the release of Gene Kelly's follow-up musical, Singin' in the Rain, which has endured even more than An American in Paris has in the years since. Although the former movie only received 2 Oscar nominations for Best Supporting Actress (Jean Hagen) and Best Scoring of a Musical Picture, but won none. Many people believe that the film's underperformance was based on An American in Paris' success from the year before, where Academy members at the time apparently felt "Gene Kelly musicals are taken care of. Moving on." Which is kind of similar to what we saw happen with the 2019 Elton John biopic, Rocketman, when it came out the year after the 2018 Queen biographical film, Bohemian Rhapsody. Despite a divided reception as well as controversies surrounding its credited director and portrayal of Freddie Mercury, the latter movie earned 5 Oscar nominations, and won on all of its bids but Best Picture. Meanwhile, many saw the former movie as everything Bohemian Rhapsody should've been, and was widely predicted to receive up to 5 Oscar nods. Yet, it was only nominated for Best Original Song ('I'm Gonna Love Me Again'), which it ended up winning over four other films that didn't have a ton of support from the Academy either. Again, voters apparently felt "Biopics about larger than life LGBT musicians are taken care of. Moving on."

As for An American in Paris, it did manage to beat some future classics for Best Picture like A Place in the Sun and A Streetcar Named Desire. Though with that being said, it has still gone on to be regarded as a classic in its own right, especially among Gene Kelly's filmography. It even spawned a 2015 Tony-winning stage adaptation that incorporated some more dramatic heft into the plot as opposed to the lighter fare of the original movie.
Proudly powered by Weebly
KARE REVIEWS