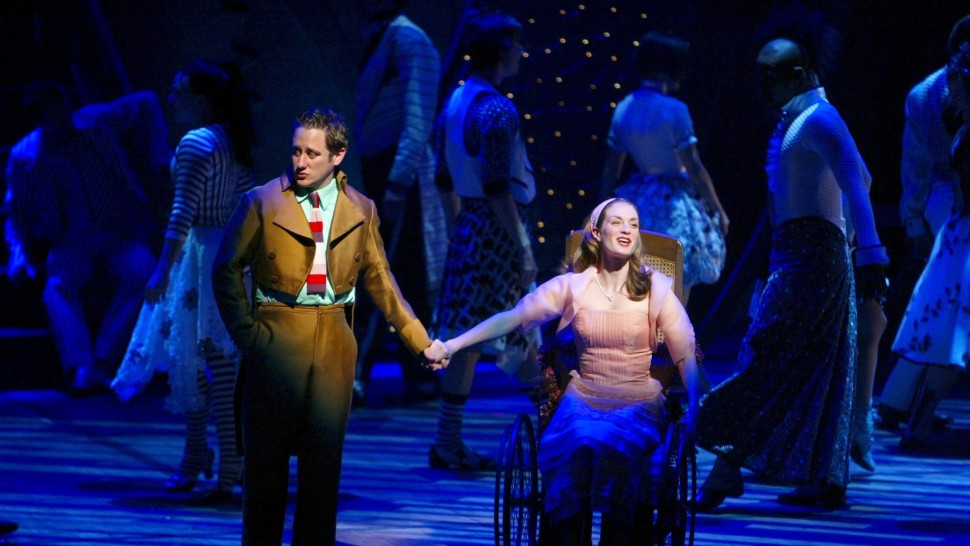 Most recently, it was announced that Jon M. Chu, who is coming off of his upcoming film adaptation of the 2008 Tony-winning musical, In the Heights, has taken over as director of Universal's long-awaited film adaptation of the Broadway smash, Wicked. He replaces Stephen Daldry, who had previously departed back in October of last year due to the studio wanting to mount it more quickly than he was comfortable moving. In fact, when Chu posted the announcement on his Twitter feed, he asked his followers "So... Twitterverse, who should we cast?". I've already thrown in other suggestions for Elphaba, Glinda, and Fiyero. So now, I'm going give a duo of ideas for Nessarose, Elphaba's physically disabled younger sister who later becomes known as The Wicked Witch of the East. On Broadway, that role was originated by Michelle Federer, who was able to meet her now husband, actor Norbert Leo Butz, during the process.

Now on with my suggestions...
I may be a little biased about this choice given that she's from my area of residence as well as the fact that I've interviewed her back in May of 2016, but I do think she is worth considering nonetheless. English Bernhardt is in my opinion a very exciting young talent to watch who has an extensive list of credits at North Carolina Theatre. She has appeared in their productions of The Music Man (with Tom Wopat as Harold Hill), Annie Get Your Gun, The Sound of Music, Annie (with Andrea McArdle as Miss Hannigan), Cinderella, Evita, Hairspray (with a younger Ariana DeBose as Little Inez), Legally Blonde, Les Misérables, The Little Mermaid, and Next to Normal. In 2014, she became a recipient of the Durham Performing Arts Center's Triangle Rising Star Award, which led to her competing at the Jimmy Awards in New York City. It was during English's performance there that she caught the attention of a casting director in the audience, who would later cast her in a workshop/lab of this new musical that was at the time in the works called Dear Evan Hansen​. Through that experience, director Michael Greif went on to cast English in the ensemble of the If/Then​ national tour, which happened to have had the same lead producer as Wicked, Marc Platt. Most recently, she was the standby for three different roles in the national tour of Mean Girls before the pandemic shut everything down. When I spoke with English in 2016, she told me that Nessarose happens to be one of her dream roles. So because of that, I think she should be kept in mind for Wicked in general. Not just any of the North American companies, but also the movie as well. The latter may not be as realistic of a possibility, but I think she at least deserves a chance to audition for it.
Jo Ellen Pellman is a native of Cincinnati, Ohio who graduated from the University of Michigan with a BFA in musical theatre. After having played bit parts in a few TV shows such as Alternatino, The Deuce, and The Marvelous Mrs. Maisel, she made her motion picture debut starring as Emma Nolan in Ryan Murphy's recent Netflix film adaptation of the 2018 Tony nominated musical, The Prom, which she won following a nationwide casting search. Pellman may not have any follow-up gigs announced yet (which is likely due to the pandemic beginning around the same time principal photography on The Prom was wrapping up), but I think she should play Nessarose in Wicked. Now that she has a major starring role in a movie under her belt, Universal should at least consider her. If not, she could always play that role on Broadway.
​I'll be back with another one of these sometime soon to discuss a different character. In the meantime, what do you think of these ideas? Do you have any of your own? For those interested in reading the previous blog posts I've done on this topic, you can find the link to all of them below.