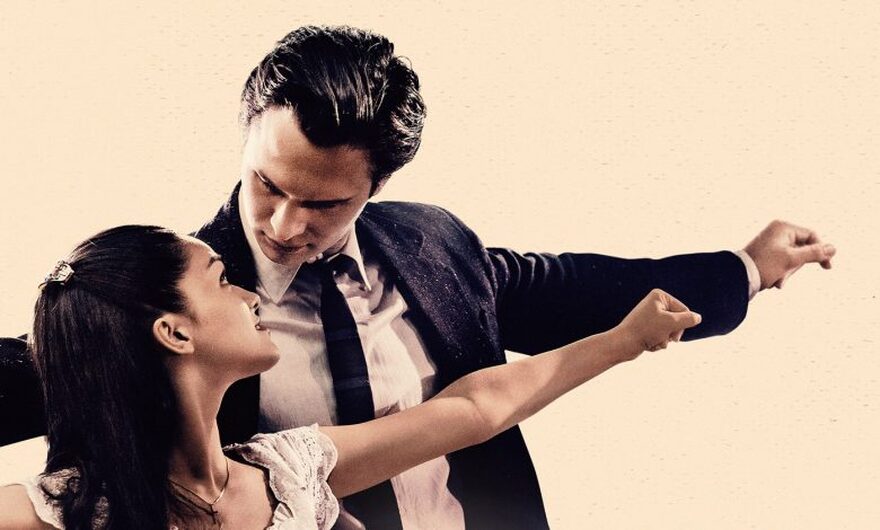 Based on Arthur Laurents, Leonard Bernstein, & Stephen Sondheim’s 1957 Tony-winning stage musical of the same name which in turn was inspired by William Shakespeare’s famous play, Romeo & Juliet, West Side Story is set in the Upper West Side neighborhood of New York City in the mid-1950s. The story explores the rivalry between two teenage street gangs of different ethnic backgrounds. The Jets, a white gang, and the Sharks, who are immigrants from Puerto Rico. Meanwhile, Tony (Ansel Elgort), a former member of the Jets and best friend of the gang's leader, Riff (Mike Faist), falls in love with Maria (Rachel Zegler), the sister of Bernardo (David Alvarez), the leader of the Sharks.

This is the second feature film adaptation of one of the great works in the American musical theatre following the 1961 version directed by Robert Wise & Jerome Robbins (the latter of whom conceived, directed, and choreographed the original stage musical). When it was first revealed way back in early 2014 that Steven Spielberg was interested in directing his own iteration of West Side Story, I had mixed feelings about that. The 1961 version is in my opinion an absolute masterpiece in movie musicals. As an adaptation, it was very faithful to the source material while it also successfully restructured the plot that greatly benefitted the film itself. Robert Wise and screenwriter Ernest Lehman proved with West Side Story (as well as 1965’s The Sound of Music) that they really knew how to translate stage musicals into very cinematic movies. To top it all off, West Side Story is still the most awarded musical in Oscar history as it won 10 Academy Awards (including Best Picture) back in the day. So with all of those factors in mind, I, like many people, really questioned if the idea of making a new film adaptation even felt necessary. Especially when other classic stage musicals such as A Little Night Music, Mame, and Man of La Mancha were each previously adapted very poorly for the big screen, and people feel are the ones that deserve to be rebooted.

Yes, I get that there’s certain aspects of the 1961 movie that are nowadays seen as problematic. Specifically the fact that a lot of the Puerto Rican characters were played by white people. Which to be fair, wasn’t considered a problem at all back in the day as there weren’t really many Latino performers working in show business. Even the original Broadway production had white performers playing Puerto Rican characters. In last year’s HBO documentary titled Natalie Wood: What Remains Behind, they talked about how Maria in the 1961 West Side Story is one of the late actress’ most iconic roles, yet it’s one she would never get cast as today (especially not without huge protests from people). I know one of the benefits of this new film adaptation is that all of the Puerto Rican characters are played by actual Latino performers. Though with that being said, when everything else about the 1961 film is firing on all cylinders, how could you possibly compete with that? I think if the whole is greater than the sum of its parts, then the movie itself should be left alone, warts and all.

Matt Neglia of Next Best Picture personally thinks any movie that wins the Oscar for Best Picture should just serve as a time capsule where people look back at them, take lessons from whatever aspects that might've been deemed problematic, and use those as a way to do better with new stories moving forward as opposed to redoing old ones. After all, doing a new movie version of a classic story isn’t the same thing as presenting a new stage production of a classic play/musical. A great work can spend decades off the Broadway stage before it returns to dazzle a whole new generation of theatergoers. Conversely, movies live forever on the DVD shelf, or can be instantly accessed through streaming services. There's always a way to see them.

Though with Steven Spielberg at the helm, I was willing to give him the benefit of the doubt. After all, he is one of the greatest and most influential filmmakers of all time. I know he had always wanted to direct a musical. While Spielberg could’ve done a completely original one like La La Land or brought a theater piece that had never been adapted before like Miss Saigon or Ragtime to the big screen, he instead chose to do his own adaptation of West Side Story. Although he told Vanity Fair for an article covering this film that the original Broadway cast recording “was actually the first piece of popular music our family ever allowed into the home. I... fell completely in love with it as a kid”.

Whenever I critique a retelling of any classic story, I usually like to judge it as its own entity without making that many comparisons to what’s come before. Steven Spielberg’s West Side Story is not a carbon copy of either the 1961 film nor original stage musical. Screenwriter Tony Kushner not only added more depth and motivations to the characters and setting, but also whole new lines of dialogue. Very little of Arthur Laurents’ lines from the book of the musical are actually used here.

I quite liked how Steven Spielberg approached a lot of the musical numbers. My favorites were actually both of Tony’s big solos (‘Something’s Coming’ and ‘Maria’). I also liked how the big showstopper, ‘America’, was reimagined by having it take place all over the Puerto Rican neighborhood of New York in the day as opposed to on a rooftop at night. For a movie that is over two and a half hours long, the editing by Michael Kahn & Sarah Broshar actually feels very well paced. If Spielberg ever directs more musicals, I’d be intrigued to see what he does with them.

As for Ansel Elgort, who in June of 2020 (almost a year after principal photography wrapped up) received an allegation of sexual assault from a young girl,...I’m not going to take that into account when critiquing his work here. Whenever I see anyone in any project, I don't usually care about who they are in real life. The most I care about is the performance they're giving. With that being said, I found Ansel’s work as Tony to be a bit of a mixed bag. While he does have his moments, there are other times where I found him to be pretty plain emotionally. I really liked Rachel Zegler as Maria. In fact, I think I might even prefer her take on the character to Natalie Wood’s from the 1961 version. Issues of race aside, I thought Natalie gave quite a lovely performance as Maria in the latter. However, Rachel is not only perfect in terms of ethnicity, but also in terms of her strong acting and stunning vocals.

Mike Faist makes for a terrific Riff. David Alvarez is both charismatic and suave as Bernardo. Ariana DeBose is very good as Anita (especially in the third act, which is also where I thought the film was at its strongest). Other characters from the original stage musical even get more opportunities to shine here. Brian d’Arcy James is quite memorable as Officer Krupke and Josh Andrés Rivera does well as Chino (who also gets an added character arc). Despite her limited amount of screen time, Rita Moreno makes the most of her appearances in the film as the new character, Valentina. Her rendition of ‘Somewhere’ is definitely a highlight.

Overall, I don’t think this adaptation of West Side Story 100% lives up to the 1961 movie. Although I do think it’s a worthy companion that brings some smart ideas to the table that I really appreciated, and I’m glad it exists.