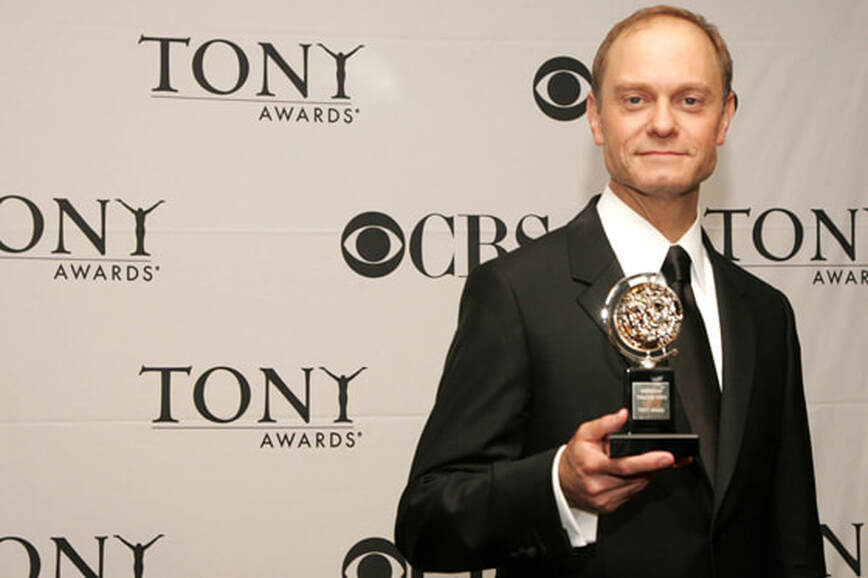 I'm very excited to launch a brand new series on Kare Reviews titled 'Tonys Flashback', where I take a deep dive into all of the nominees from any previous acting race at the Tony Awards. For the inaugural feature, we'll be taking a look back at what ended up being a very competitive race from 2007. So for each of the five nominees, let's go in order of who was (probably) last place to first place, shall we?

​5. Michael Cerveris-LoveMusik
In this biographical musical, Michael Cerveris played real-life German composer Kurt Weill. The story explored the lives and romance of him and actress Lotte Lenya from when they first met as struggling young artists, to their popularity in Europe and America, to Weill's death of a heart attack in 1950.

This was the fourth of six Tony nominations for Michael Cerveris. At that point, he was already a previous winner from 2004 for his featured performance as John Wilkes Booth in the Broadway premiere of Stephen Sondheim & John Weidman's Assassins. He was also just coming off of his first Lead Actor nomination for his performance as the title character in the John Doyle-helmed revival of Sweeney Todd from the year before.

​Leading up to the Tonys, Cerveris had nominations from the Outer Critics Circle, Drama League, and Drama Desk Awards. However, given that he had just won first Tony about three years prior, there probably wasn't any desire to want to give him a second one so soon (he had to wait until 2015 to do so for Fun Home). Not to mention that with LoveMusik not making the cut for Best Musical, you'd have to go all the way back to 1977 when Barry Bostwick won this award for The Robber Bridegroom despite his show not getting nominated in a top category. Plus, according to the ﻿New York Times' Tony voter survey﻿ that year, Cerveris had been overshadowed a little by the raves for his co-star, Donna Murphy.

4. Gavin Lee-Mary Poppins
In this stage adaptation of P.L. Travers' children's books as well as Walt Disney's 1964 Academy Award-winning movie musical of the same name, Gavin Lee played Bert, who is a "jack of all trades" that serves as narrator of the story. He is a song and dance man, charismatic and charming. It is hinted he possesses some magic ability as well, or at least knows all about the magical world that Mary Poppins comes from. It is mentioned Bert has known Mary before the story starts, but no details of how are mentioned. Bert spends time in the park that sits on one side of Cherry Tree Lane, and he mentioned that he has seen Jane and Michael before, but it is not until Mary Poppins arrives that he interacts with them.

This was the first of two nominations for Gavin Lee. He would go on to be nominated for Best Featured Actor in a Musical in 2018 for his performance as Squidward in the Spongebob SquarePants musical. Mary Poppins also marked Lee's Broadway debut reprising a role he had originated in London's West End and received a Laurence Oliver Award nomination for his performance.

Leading up to the Tonys, he had nominations from the Outer Critics Circle and Drama League Awards. Lee was also one of 12 recipients of the Theatre World Award that year for his debut and won the Drama Desk in the category of Outstanding Featured Actor in a Musical. While I can understand the role of Bert kind of being a borderline featured role, I've already mentioned that he narrates the story. If that doesn't make him the male lead of Mary Poppins, then what does? Though according to the Times' aforementioned survey, Lee didn't appear to have stirred up much buzz for his turn as Bert.

3. Jonathan Groff-Spring Awakening
In this rock musical adaptation of Frank Wedekind's 1891 German play of the same name, Jonathan Groff played Melchior Gabor, a rebellious and highly intelligent teenage schoolboy who knows much more than the others because of what he reads in books and is able to see the corruption in society. He very well could have risen to the top of his class, but instead rejects his school's hard regime and rebels against it. Over the course of the story, Melchior along with several of his classmates discover the inner and outer tumult of teenage sexuality.

​Leading up to the Tonys, Jonathan Groff had nominations from the Outer Critics Circle, Drama League, and Drama Desk Awards. He was also one of 12 recipients of the Theatre World Award that year for his debut. Though despite starring in the eventual Best Musical winner, the Times' survey suggested voters felt that Groff was just getting started and that he'd have more chances of winning in the future (or so goes the logic). It appears to me that his age at the time (22) had to have been factor. The motion picture academy (which mainly consists of old men) doesn't usually like to award 20-something year olds in the Best Actor category at the Oscars, and it seems to be the case at the Tonys as well as the average winner in this category tends to be at least 30 years old. Though there are exceptions to the rule like Ben Vereen, who was 27 when he won for the original production of Pippin, Ben Platt, who was 23 when he won for Dear Evan Hansen, as well as David Alvarez, Trent Kowalik, & Kiril Kulish, who were all in their teens when they won for Billy Elliot.

In a way, Tony voters were right for several reasons. For one, this was the first of two nominations for Jonathan Groff as he would go on to be nominated for Best Featured Actor in a Musical in 2016 for his performance as King George III in Hamilton. Not only that, but he would also go on to get cast in a recurring role on Ryan Murphy's hit TV series, Glee, a small role in Clint Eastwood's 2014 Oscar-winning film, American Sniper, starring roles on two different TV shows, HBO's Looking as well as Netflix's Mindhunter, and as the voice of Kristoff in Disney's multi-million dollar animated franchise, Frozen.

2. Raúl Esparza-Company
In the second Broadway revival of Stephen Sondheim & George Furth's 1970 classic, Raúl Esparza played Bobby, a single man celebrating his 35th birthday, yet is unable to fully commit to a steady relationship, let alone marriage. Over the course of a series of dinners, drinks, and a wedding, his married friends explain the pros and cons of taking on a spouse.

This was the second of four nominations for Raúl Esparza. He was previously nominated in 2004 for his featured performance as Philip Sallon in the Boy George musical, Taboo. He'd even go on to receive two additional bids for his work in revivals of Harold Pinter's The Homecoming (2008) and David Mamet's Speed-the-Plow (2009). Leading up to the Tonys, Raúl had wins from the Outer Critics Circle and Drama Desk Awards as well as a nomination for Distinguished Performance from the Drama League. Despite his show winning Best Revival of a Musical that year, he sadly didn't end up going along for the ride as part of Company's final prize haul. Especially given how often the Tony-winning musical revival would go on to take a lead acting prize a lot in the 2010s. Examples included La Cage aux Folles, Anything Goes, Porgy & Bess, Pippin, Hedwig & the Angry Inch, The King & I, The Color Purple, and Hello, Dolly!.

In fact, the role of Bobby in Company really has had some strange luck when it comes to the Tonys. Larry Kert was nominated for the original Broadway production (despite having already taken over for Dean Jones after opening night), yet lost to Hal Linden for The Rothschilds. Boyd Gaines wasn't even nominated for his performance in the 1995 revival. Now, Katrina Lenk's fate for the gender flipped production is up in the air.

​1. David Hyde Pierce-Curtains
In this original murder mystery musical comedy, David Hyde Pierce played Lieutenant Frank Cioffi, a police detective who comes to Boston to solve a mystery involving the murder of Jessica Cranshaw, who was the supremely untalented star of a new musical having its out-of-town tryout titled Robbin' Hood of the Old West. While on the case, Frank, who just so happens to love musical theater, also ends up solving the problems with the show.

​This was the first of three nominations for David Hyde Pierce. He would go on to receive additional bids for his lead performances as Vanya in Christopher Durang's 2013 Tony-winning play, Vanya and Sonia and Masha and Spike, and as Horace Vandergelder in the most recent Broadway revival of Hello, Dolly! from 2017. Leading up to the Tonys, David had nominations from the Outer Critics Circle, Drama League, and Drama Desk Awards.

So How Did David Hyde Pierce Win?: According to the New York Times' survey, he was described as "a man well liked around Broadway and the anchor for a show that got some disappointing reviews." Of the Tony voters that were surveyed, David Hyde Pierce received the most votes, but the race there was very, very close between him and Raúl Esparza. New York Post columnist Michael Riedel even mentioned on Theater Talk's 2007 Tony Predictions show that he felt voters might want to award Curtains somewhere given that it was one of the final musicals the much celebrated songwriting team of John Kander & Fred Ebb wrote together before Ebb died of a heart attack in 2004, and that David Hyde Pierce would be the best place to do it.

​Although when Company opened back in the fall of 2006, Raúl was widely seen as the frontrunner throughout the season. If you watched any of the five clips I listed above and hadn't known anything about the end results of the 2007 Tonys, you'd be convinced he won the award in a landslide. By the time Best Lead Actor in a Musical was presented, Harvey Fierstein & Bernadette Peters took turns reading out each of the five nominees before announcing the winner (@1:02)...
While I'm sure not every single voter ended up thinking like this, I guess that since Company was already winning Best Musical Revival, that probably left some of them off the hook in Best Lead Actor so they could spread the wealth by giving it to someone else. In the years since, fans have expressed their disappointment with the outcome of this Tony race. Not so much for David Hyde Pierce winning, but more so for Raúl Esparza losing. I even remember shortly after the 89th Academy Awards in 2017, someone started a thread in the message boards at BroadwayWorld asking people about snafus they've witnessed at the Tonys (this was in response to Faye Dunaway & Warren Beatty accidentally revealing La La Land as the Best Picture winner as opposed to Moonlight). Someone posted a reply saying "That time David Hyde Pierce won Raúl Esparza's Tony."

Looking at this lineup now, it's interesting to see how all five of these actors would go on to be nominated again, yet Michael Cerveris and David Hyde Pierce are the only ones who've managed to win. While it's currently unknown if any of the other three will have another shot of winning someday, Raúl Esparza has certainly become overdue at this point with four nominations and zero wins. Though he's also overdue for a Broadway return as he hasn't been seen on the main stem since his star turn in the short-lived 2012 Tony nominated musical, Leap of Faith.
Proudly powered by Weebly
KARE REVIEWS