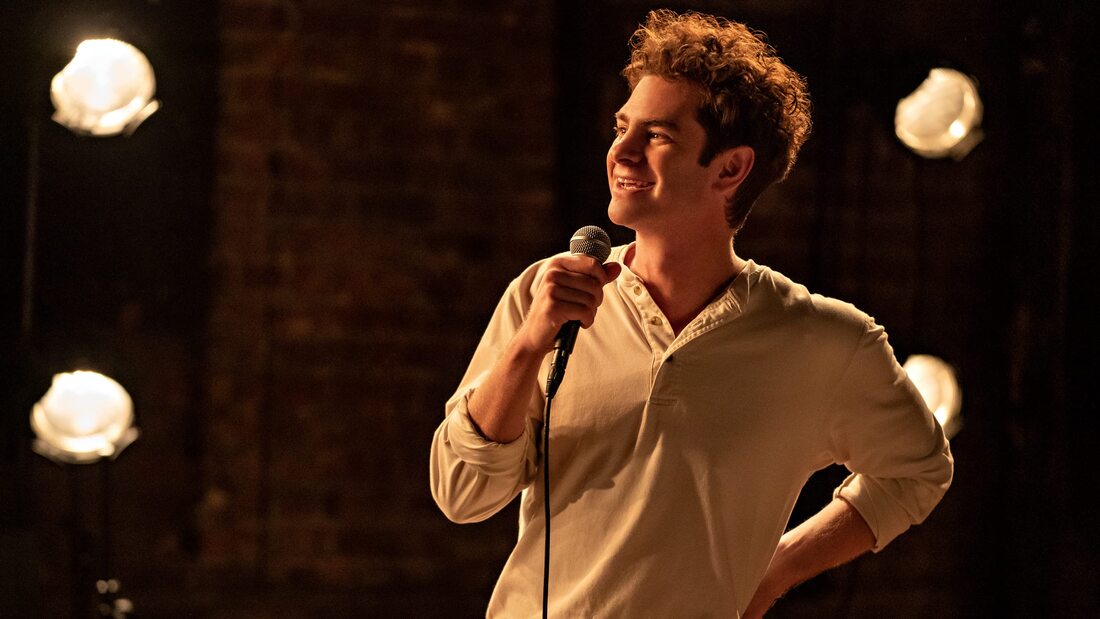 Based on Jonathan Larson’s 1990 semi-autobiographical stage musical of the same name, tick, tick...BOOM! follows an aspiring young musical theater writer (Andrew Garfield) who's waiting tables at the Moondance diner of New York City back in 1990 while creating what he hopes will be the next great American musical. Days before he's due to showcase his work in a make-or-break performance, Jonathan is feeling the pressure from everywhere: from his girlfriend Susan (Alexandra Shipp), who dreams of an artistic life beyond New York City; from his friend Michael (Robin De Jesús), who has moved on from his dream to a life of financial security; amidst an artistic community being ravaged by the AIDS epidemic. With the clock ticking, Jonathan is at a crossroads and faces the question everyone must reckon with: What are we meant to do with the time we have?

​The original stage version was first performed as a rock monologue (which was a new form of theatre for the time) by Jonathan Larson in a workshop at Second Stage Theater under the title of Boho Days in September of 1990. He later revised it following that run, changing the title to tick, tick...BOOM!, and presented it with himself as a performer at the Village Gate over a year later. On January 25th, 1996, Jonathan Larson tragically died of an undiagnosed aortic aneurysm hours before the first preview of his musical, Rent, at Off-Broadway’s New York Theatre Workshop. After that show went on to become a Broadway sensation, Larson’s college friend, producer Victoria Leacock, asked playwright David Auburn to reconfigure tick, tick...BOOM!. He restructured it into a three-person musical with one actor playing Jon and the other two playing multiple roles. Auburn also streamlined and edited the script and score, although he ended up getting credited as ‘Script Consultant’, giving Larson credit for everything else. The revised version premiered at Off-Broadway’s Jane Street Theatre on May 23rd, 2001. Now it’s a movie directed by one of many theatre artists who’s been influenced by Jonathan Larson, Lin-Manuel Miranda.

​For his feature directorial debut, Miranda does a terrific job. He along with screenwriter Steven Levenson very wisely chose to have the story set around this framing device where Jonathan Larson is performing his rock monologue in front of an audience at New York Theatre Workshop with his friends Roger (Joshua Henry) and Karessa (Vanessa Hudgens). Which is a pretty clever nod to the origins of this musical. Editors Myron Kerstein and Andrew Weisblum brilliantly cut back and forth between the performance and the actual events Jonathan Larson tells in his story. The musical numbers Miranda visualizes with cinematographer Alice Brooks are stunning.

When Andrew Garfield was cast in the starring role, people weren’t sure what to make of it because as great of an actor he can be, they didn’t know what kind of background he has in musicals (which is actually none). Andrew spent a year taking voice lessons to prepare for this, and it really pays off. Not only does he hold his own alongside the more experienced musical theatre performers in the cast, but his acting on display here is quite extraordinary. He gets to play with a variety of different emotions that range from energetic to anxious to relatable. He also shares some very moving moments with Alexandra Shipp and Robin De Jesús at different points in the film. Not to mention that Bradley Whitford’s performance as Stephen Sondheim is perfect. He doesn’t impersonate the legendary musical theatre songwriter, but he does capture the essence of him in terms of both how he looks and how he talks.

If you are a musical theatre fan like me, you’re definitely gonna get a whole lot out of this movie not just because of the subject, but also because a bunch of Broadway performers make small appearances throughout (especially in the ‘Sunday’ sequence). Though if you’re not as much into musical theatre, you should still find tick, tick...BOOM! to be a fascinating look at what it’s like to be a struggling artist. This film is currently available to stream on Netflix.