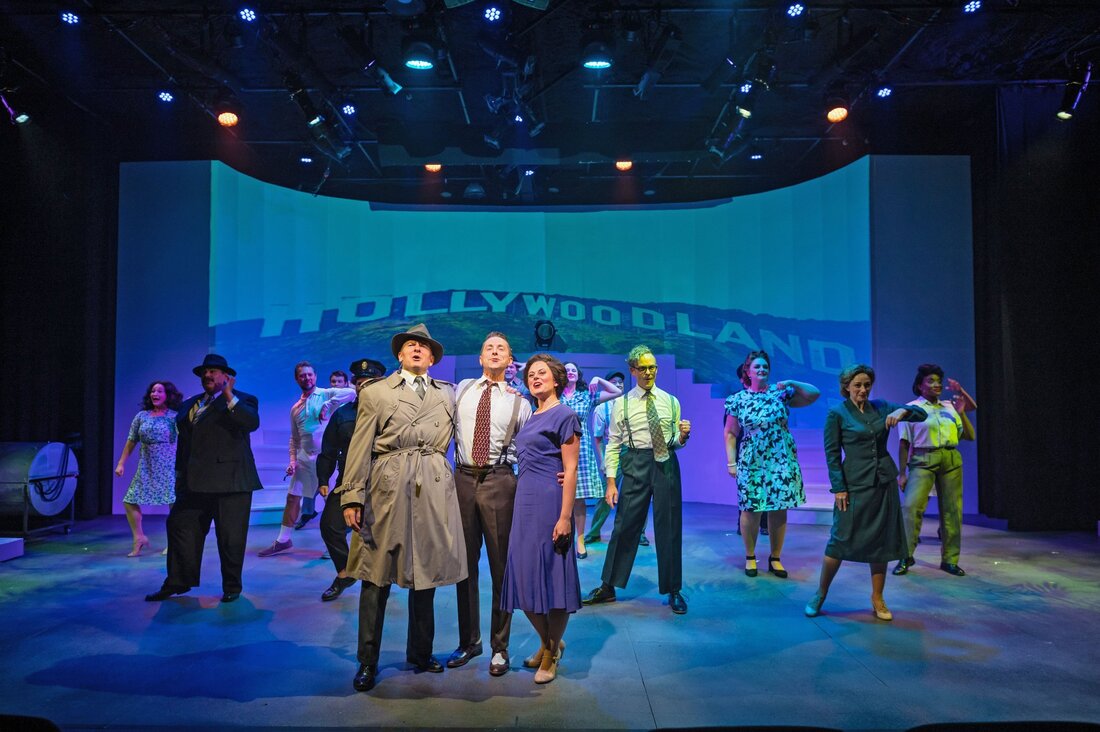 Set in the late 1940s, City of Angels follows Stine, a bookish author of detective stories who is struggling to adapt his crime novel into a workable screenplay. As Stine tries to maintain some integrity in the backstabbing world of Hollywood, his protagonist, a hard boiled private eye named Stone, fights for survival in a city full of criminals and opportunists.

​The original production opened on December 11th, 1989 at the Virginia (now August Wilson) Theatre on Broadway. As City of Angels was a completely original musical without any big stars in it, the show was only taking in about $18,000 a day during previews. Yet, when it opened to mixed reviews from critics, Frank Rich of the New York Times gave it some very glowing praise which led to $324,700 that was made at the box office a day later. The production went on to win 6 Tony Awards (including Best Musical), and ran for 879 performances after closing on January 19th, 1992.
​Prior to attending this production that’s currently running at Theatre Raleigh Arts Center through August 14th, I was mainly familiar with this musical through the original Broadway cast recording. So this was my first time seeing the show itself. I must say that hearing all the songs in context of the plot is really fascinating. The score by Cy Coleman & David Zippel captures the era of Hollywood in the 1940s very well. However, the MVP of the material to me is Larry Gelbart’s book. I heard that when you read it on the page, the plot can be hard to follow. Although when it’s presented on the stage, it’s not as confusing. The book is so impressive in how it balances out the main storylines in both the real world where Stine is writing his screenplay and the fictional movie world he’s envisioning in his head.

​Traditionally, City of Angels provides a design choice where Stine’s world is in full color while Stone’s appears in black and white. The actual physical set designed by Chris Bernier for this production is all white, but the projections by Charlie Rachske add more scenery to both worlds. Gordon W. Olson’s lighting and Kahei Shum McRae’s costumes also brilliantly go back and forth between. This whole visual aesthetic is brought to life by director/choreographer Lauren Kennedy’s clever staging. Not to mention that some scenes set in the movie world rewind a bit whenever Stine rewrites his script, which is quite astonishing to behold.

​Adam Halpin makes for a charismatic leading man as Stine, the author who’s adapting his own novel into a screenplay. He’s especially strong with his big 11 o’clock number, ‘Funny’. Adam Monley is perfectly boiled as Stone, the former police cop turned private eye who’s the main protagonist in Stone’s story. Everyone else in the cast doubles as characters in the real world and their fictive counterparts. Some of whom in the latter happen to be inspired by people Stine knows in the former. Amber Nicole Guest plays Stine’s wife, Gabby, and Stone’s ex-girlfriend, nightclub singer Bobbi. She pulls off both roles well. Happy Mahaney is great as fast talking film producer, Buddy Fidler, who keeps changing the integrity of Stine’s novel as well as Irwin S. Irving, a Hollywood mogul in Stone’s world. Megan McGinnis provides a spunky personality as both of her characters. She plays Buddy’s secretary, Donna, who has a brief affair with Stine. Which is interesting to watch because McGinnis happens to be married to Adam Halpin in real life. She also plays Oolie, who is unrequitedly in love with Stone and gos to great lengths to protect and aid him. McGinnis’ big solo in Act II, ‘You Can Always Count On Me’, is a standout. It begins with her as Oolie in the movie world, then it transitions into the real world with her as Donna continuing the song. Not to mention that McGinnis absolutely nails the number with her killing vocals.

​If you’re into film noir, you’re definitely gonna get a kick out of how this musical pays homage to that genre. Though on the whole, Theatre Raleigh’s production (taking place inside their newly opened mainstage) is really good. City of Angels rarely gets produced anywhere nowadays, so try to see it if you can. A genius book with a great score that is brought to life by a great cast and imaginative staging.