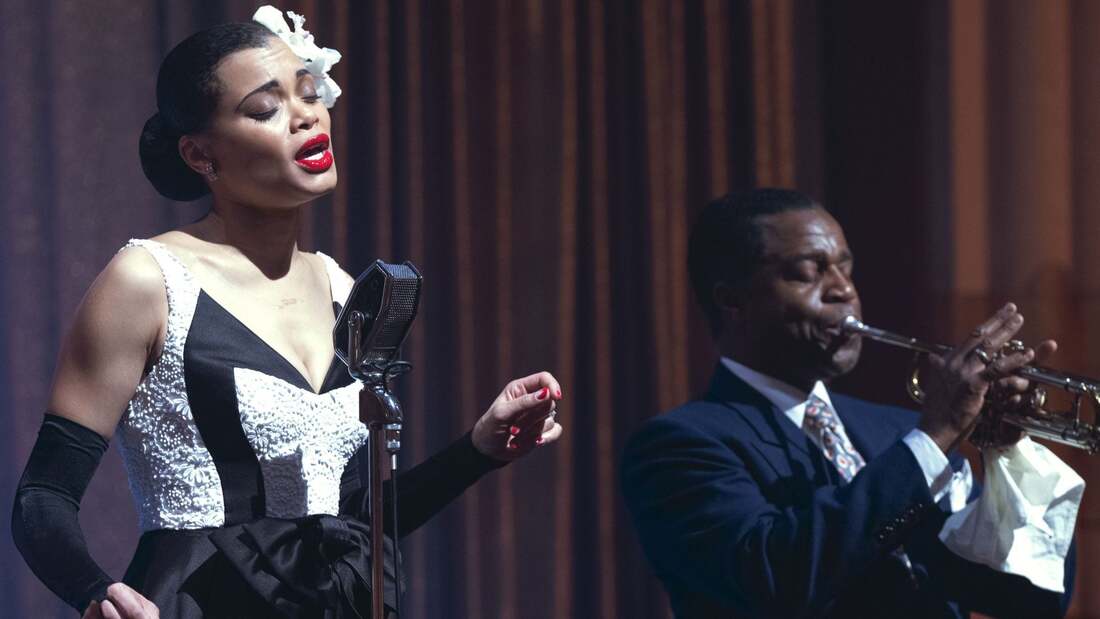 ​Based on Johann Hari's 2015 book titled Chasing the Scream: The First and Last Days of the War on Drugs, this movie follows famed jazz singer Billie Holiday (Andra Day) during her career as she is targeted by the Federal Department of Narcotics with an undercover sting operation led by black Federal Agent Jimmy Fletcher (Trevante Rhodes), with whom she had a tumultuous affair. Originally, The United States vs. Billie Holiday wasn't on my radar nor watch list at all. Yet, after Andra Day recently won the Golden Globe for Best Actress in a Motion Picture-Drama in quite a huge upset, I all of the sudden added it to my watch list on Hulu. Now I've seen it, and here are my thoughts.

Billie Holiday has been portrayed by many different actresses on the stage and screen over the years. From Diana Ross’ Oscar nominated performance in the 1972 biographical film, Lady Sings the Blues, to Audra McDonald’s Tony-winning performance in the 2014 Broadway production of Lanie Robertson’s stage play, Lady Day at Emerson’s Bar & Grill. However, Andra Day’s performance in The United States vs. Billie Holiday is absolutely outstanding. Rather than doing a full on impersonation, she instead crafts a three dimensional portrayal of the famed jazz singer, making the soul of Lady Day herself feel alive and represented in this movie.

With that being said, I do wish there was a much better film surrounding that central performance. That’s not to say that I found the whole to be bad by any means. Everyone else in the cast appeared to have done the best job they possibly could. I appreciated the visual esthetic director Lee Daniels and his team were able to come up with, making everything from the costumes, to the sets, to the hair and makeup, to the cinematography feel very evocative of the time period. In fact, on paper, I do think the story this movie tried to tell sounds like something that would be well worth exploring through a depiction on the big and/or small screen. However, with pacing that to me felt very off, I just found The United States vs. Billie Holiday to be incredibly bland and boring.

If anyone's interested in watching this film, I'd suggest doing so mainly for Andra Day's performance alone. The United States vs. Billie Holiday is currently available to stream on Hulu.