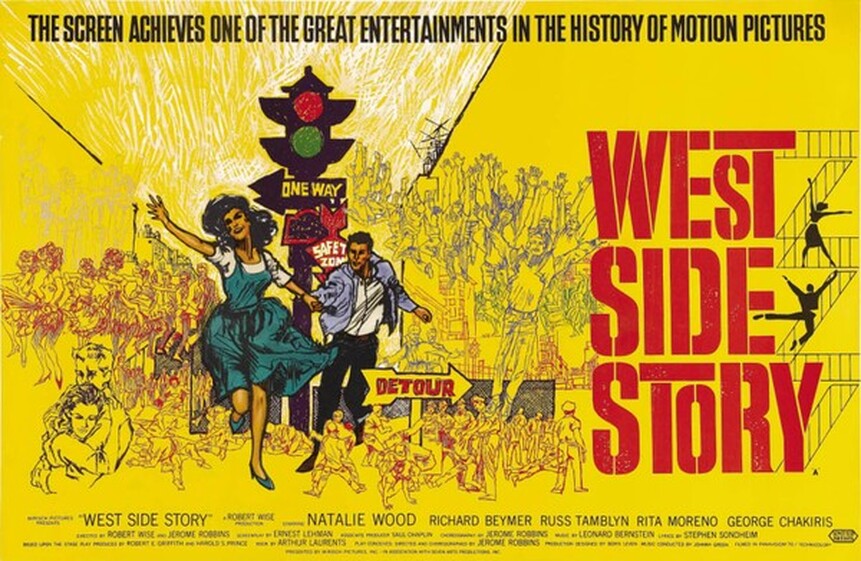 Based on the 1957 Broadway musical by Arthur Laurents, Leonard Bernstein, & Stephen Sondheim of the same name which in turn was inspired by William Shakespeare’s famous play, Romeo & Juliet, West Side Story is set in the Upper West Side neighborhood of New York City in the mid-1950s. The story explores the rivalry between two teenage street gangs of different ethnic backgrounds. The Jets, a white gang, and the Sharks, who are immigrants from Puerto Rico. Meanwhile, Tony (Richard Beymer), a former member of the Jets and best friend of the gang's leader, Riff (Russ Tamblyn), falls in love with Maria (Natalie Wood), the sister of Bernardo (George Chakiris), the leader of the Sharks.
The original stage production was more of a success through its critical reception than an outright smash when it opened on Broadway in 1957. Though for the most part, critics still had some problems with it, and West Side Story only managed a respectable if not earth shattering run. When United Artists brought the musical to the big screen, Robert Wise was hired to direct and produce the film based on his experiences with urban New York dramas such as 1959’s Odds Against Tomorrow. Though since Wise had no prior experience with musicals at the time (this was several years before he went on to helm 1965’s The Sound of Music), Jerome Robbins, who directed and choreographed the original Broadway production, was brought on board to helm the musical sequences, even giving him a co-directing credit on the film.

The film adaptation of West Side Story was released on October 18th, 1961, where it not only earned instant acclaim both critically and financially, but also reinvigorated the property of the stage musical and made it into the icon it is today. Audiences had never seen a film quite like West Side Story before, and it seemed to perfectly capture both the hope and the unseemly underbelly of the New Frontier era, becoming a cinematic zeitgeist that is still viscerally felt now about 60 years after its release. On April 9th, 1962, West Side Story ended up winning a record of 10 Academy Awards (the most of any film musical) for Best Picture, Best Director (Robert Wise & Jerome Robbins; the only time a directing team had won this award until the Coen Brothers prevailed for No Country for Old Men in 2008), Best Supporting Actor (George Chakiris; who had previously played Riff in the original London production), Best Supporting Actress (Rita Moreno), the now-retired category of Best Score of a Musical Picture, Best Art Direction-Color, Best Costume Design-Color, Best Cinematography-Color, Best Film Editing, and Best Sound Recording. In fact, the only award West Side Story didn’t end up winning on Oscar night was Best Adapted Screenplay for Ernest Lehman (which went to Abby Mann for Judgement at Nuremberg).
December 10th, 2021 will mark the release of Steven Spielberg's cinematic reimagining (not a remake given that the 1961 film is an adaptation of a pre-existing property) of West Side Story​. You can count me as one of those people who don't really get excited about remakes/reboots/sequels in Hollywood, not even of/to movie musicals such as Annie, Beauty & the Beast, Mammia Mia!: Here We Go Again, Mary Poppins Returns, and Aladdin. Neither of those had me interested at all. Though given that Spielberg is behind this reboot in particular, it does have me curious to see how it will turn out. But it will have to go a long way to be even as close as good to what Robert Wise and Jerome Robbins made in 1961 as West Side Story (in my opinion) is the best Hollywood musical ever made.
Proudly powered by Weebly
KARE REVIEWS