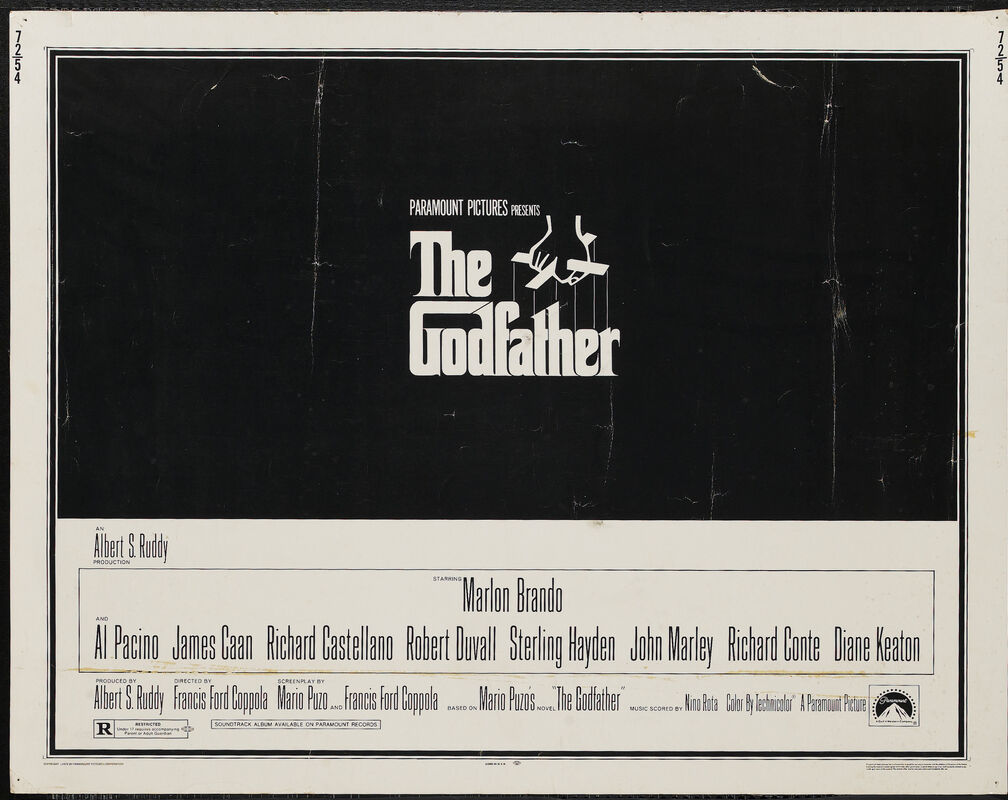 Based on Mario Puzo’s 1969 crime novel of the same name that sold over nine million copies within two years when it was published, The Godfather follows Don Vito Corleone (Marlon Brando), a well-respected leader among the Italian-American community. Hidden beneath the exterior of a businessman in the olive oil trade, Vito is a charming dictator with his hands in a variety of legitimate and criminal ventures. One day, the Corleone patriarch is approached by the representative of a rival family with a request for assistance in a profitable narcotics venture, which Vito refuses. This sets off a tragic war between the two families, and eventually leads to a leadership transfer from Vito to his son. Michael Corleone (Al Pacino) is a well-educated young man with conflicting ambitions. On the one hand, he wants to legitimize the family business and escape the violent world of organized crime. However, he soon realizes the rival families are out to ruin the Corleone family, and intend to remove the head of the organization in order to cripple the body. With a constant target on his back, Michael is forced down a crash-course on betrayal and deception, as he furiously battles to protect everything his father built.
Paramount Pictures found out about Puzo's sixty-page unfinished manuscript in 1967 when a literary scout for the company contacted the then Vice President of Production, Peter Bart. He believed the work was ‘much beyond a Mafia story’ and offered Puzo a $12,500 option for the work, with an option for $80,000 if the finished work were made into a film. Despite Puzo's agent telling him to turn the offer down, Puzo was desperate for money and accepted the deal. On March 23, 1970, Albert S. Ruddy was officially announced as the film's producer, in part because studio executives were impressed with his interview and because he was known for bringing his films in under budget. Studio executives had trouble finding a director, as their first few candidates turned down the position. Peter Bart was the one who wanted Francis Ford Coppola to direct the film because he believed Coppola would work for a low sum and budget. Coppola initially turned down the job because he did not finish Puzo's novel. Coppola's production company, American Zoetrope, at the time owed over $400,000 to Warner Bros. for budget overruns with the film THX 1138 and when coupled with his poor financial standing, along with advice from friends and family, Coppola reversed his initial decision and took the job.

After debuting in New York and Los Angeles a little earlier in the month, The Godfather was released on March 24, 1972. It quickly attained the status of instant classic and has only risen in the estimation of critics and film buffs worldwide. The Godfather not only redefined its genre, it also redefined American cinema and proved to be one of the most cherished and influential films of all time. When the 45th Academy Awards were held on March 27th, 1973, The Godfather was nominated for 10 awards (including Best Picture). Even though the ceremony started off with a sweep by Cabaret (which still holds the record for the most Oscar wins, 8, without the big one), The Godfather was able to rebound by winning three awards for Best Picture, Best Actor (Marlon Brando; who actually boycotted the Oscars that year due due to Hollywood’s misrepresentation of American Indians), and Best Adapted Screenplay (Francis Ford Coppola & Mario Puzo).
Proudly powered by Weebly
KARE REVIEWS