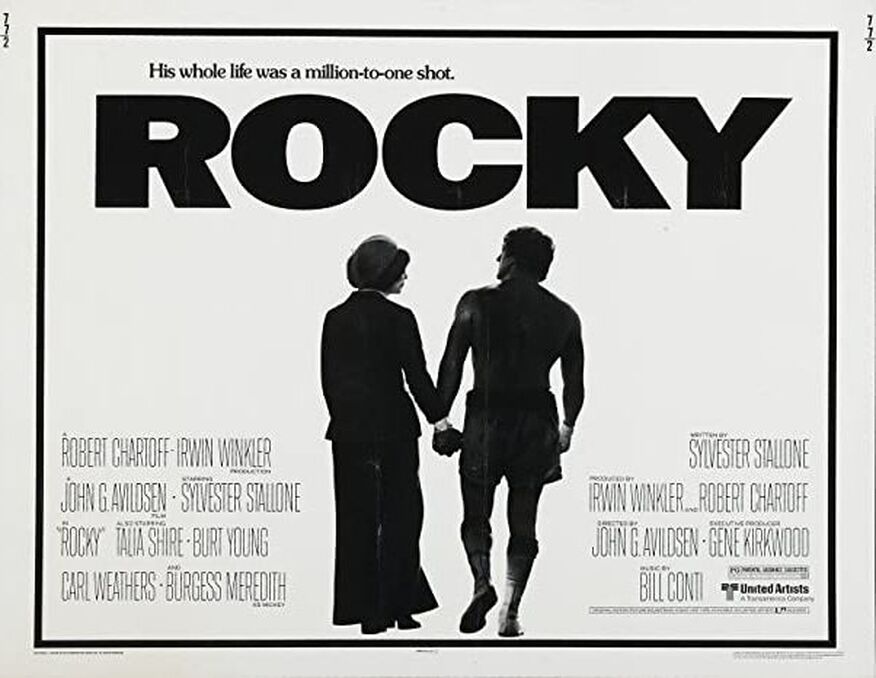 Rocky tells the rags to riches story of Rocky Balboa (Sylvester Stallone), an uneducated but kind-hearted working class Italian-American boxer in Philadelphia who is struggling trying to make it to the big time. Despite his true talent and his inability to admit defeat, his friends and his coach, Micky Goldmill (Burgess Meredith), never give him the time of day. When heavyweight champion Apollo Creed (Carl Weathers) visits Philly, his managers want to set up an exhibition match between him and a struggling boxer, touting the fight as a chance for a "nobody" to become a "somebody." Creed chooses Balboa based on his nickname, 'The Italian Stallion'. With his shot at glory in front of him, Rocky trains harder than he thought was possible in order to earn his own self-respect and go the distance.
Shortly after watching the championship match between Muhammad Ali and Chuck Wepner that took place at Richfield Coliseum in Richfield, Ohio on March 24th, 1975, actor Sylvester Stallone wrote the screenplay for Rocky in three and a half days. When he sold the script to United Artists, executives viewed it as a possible vehicle for a well-established star like Robert Redford, Ryan O'Neal, Burt Reynolds, or James Caan. However, Stallone was very adamant about playing the title character himself, where he even vowed not to have his screenplay produced if he wasn't going to star in it. He also knew that producers Irwin Winkler and Robert Chartoff's contract with the studio enabled them to greenlight a project if the production budget was kept low enough. Therefore, the film cost about $1,075,000 to make.

After having debuted in New York City almost two weeks earlier, Rocky was released in movie theaters nationwide on December 3rd, 1976. While initial reviews at the time were mostly positive, there were still several critics who didn't like it. Though at the box office, Rocky managed to make over $225,000,000 worldwide, making it the highest-grossing film of that year. On March 28th, 1977, the movie ended up winning 3 Academy Awards for Best Picture, Best Director (John G. Avildsen), and Best Film Editing. Since then, the Rocky's reputation has grown, making it a classic that still receives nearly universal praise, and has spawned an entire franchise that consists of sequels, spin-offs, and a Tony-winning stage musical adaptation.
Proudly powered by Weebly
KARE REVIEWS