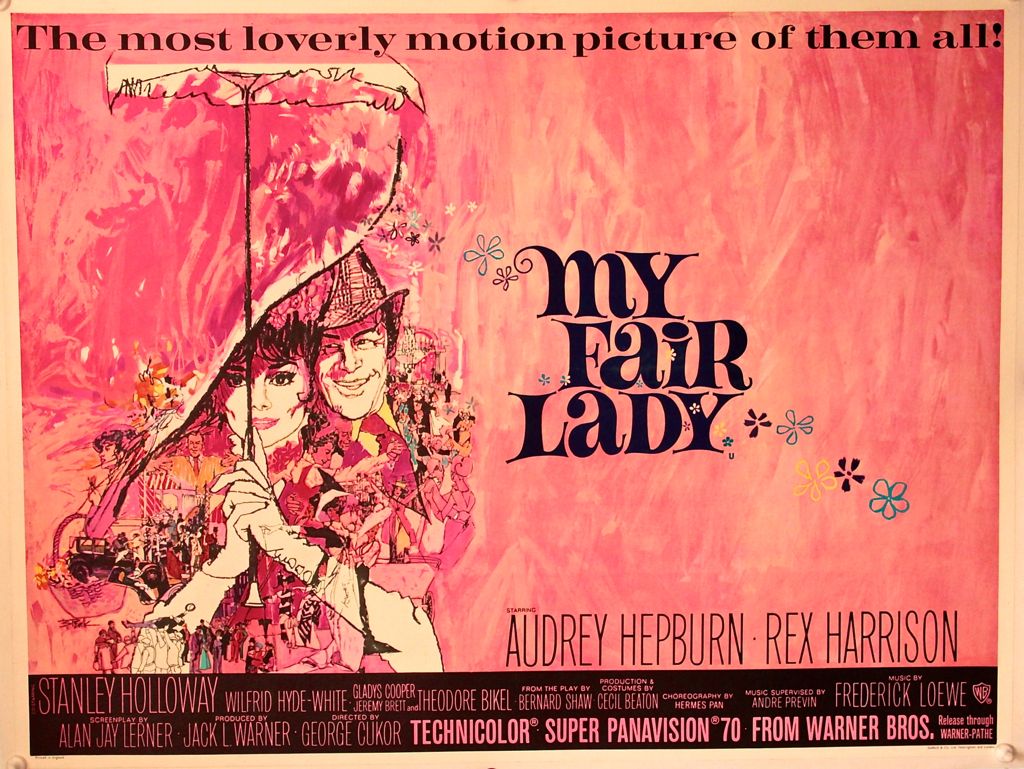 Based on the 1956 Broadway musical by Alan Jay Lerner and Frederick Loewe of the same name as well as George Bernard Shaw’s 1913 play, Pygmalion, My Fair Lady follows Eliza Doolittle (Audrey Hepburn), a cockney flower girl who peddles flowers to any and all comers, even the wealthy elite amongst who always ignore her for her social status and thick Cockney accent, either of which are a hurdle, both of which mean she's in for a hard life of poverty. But as chance would have it, she runs into phonetics professor, Henry Higgins (Rex Harrison), who is so gifted with a knowledge of patterns of speech that he can pinpoint anyone's place of origin to within a few miles. He's rather stuffy and too self-assured, looking down on those poor souls who 'butcher' his language, even if they do so naturally rather than by choice. Eliza overhears him boasting that he can turn any old peasant with a go-nowhere accent into a proper socialite and accepted member of high society in six months. Eliza tracks him down and begs him to improve upon her native tongue so she might land a career in a real flower shop, but there's only one problem: she can't afford to pay the professor his usual wage. As fate would have it, a wealthy nobleman and noted phonetician, Colonel Hugh Pickering (Wilfrid Hyde-White), makes a wager with Higgins, challenging him to turn Eliza into a first-class fair lady who will be accepted amongst the elite based strictly on her use of the English language.
The success of the Broadway show led to Hollywood producer Jack L. Warner buying the film rights for $5,000,000 on February 6th, 1962. Originally, Warner opted not to use any of the musical’s original stars, Julie Andrews nor Rex Harrison, for the film. Andrews at the time had yet to even appear on the big screen, so Warner doubted that she’d be much of a draw. While Audrey Hepburn did replace Julie Andrews in the role of Eliza Doolittle, Rex Harrison got to reprise his role as Professor Henry Higgins in the film.

After premiering in New York and Los Angeles a couple months earlier, My Fair Lady was finally released nationwide on December 25th, 1964. On April 5th, 1965, the film won 8 Academy Awards for Best Picture, Best Director (George Cukor), Best Actor (Rex Harrison; making him one of 11 people to have won a Tony and an Oscar for the same role), Best Art Direction-Color, Best Costume Design-Color (both for Cecil Beaton; who also designed costumes for the original production), Best Cinematography-Color (Harry Stradling; who also shot the 1938 film adaptation of Shaw’s Pygmalion), Best Sound Mixing, and the now retired category of Best Adapted Score. While Audrey Hepburn wasn’t even nominated for Best Actress that year, the Oscar went to Julie Andrews for her motion picture debut as Mary Poppins.
Fans of My Fair Lady should be in for a treat this year as Lincoln Center Theater in New York City is currently in rehearsals for a Broadway revival that's set to begin performances next month at their Vivian Beaumont Theatre. The production will star Lauren Ambrose as Eliza Doolittle, Harry Haden-Patton as Henry Higgins, Norbert Leo Butz as Alfred P. Doolittle, Allan Corduner as Colonel Pickering, Jordan Donica as Freddy Eynsford-Hill, and Diana Rigg as Mrs. Higgins.
Proudly powered by Weebly
KARE REVIEWS