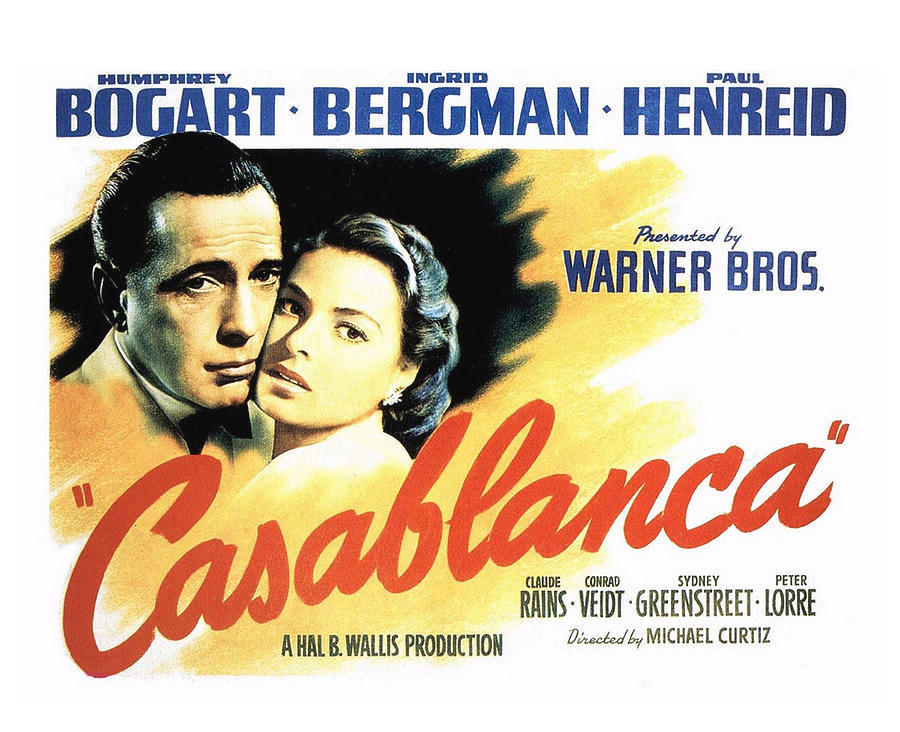 Based on Murray Burnett & Joan Allison's unproduced stage play titled Everybody Comes to Rick’s, Casablanca is set in Morocco during World War II, where American expatriate Rick Blaine (Humphrey Bogart) owns an upscale nightclub and gambling den in the Vichy-controlled city. One night, Rick's cafe is visited by his former lover, Ilsa Lund (Ingrid Bergman), and her now-husband, Victor Laszlo (Paul Henreid), a Czech Resistance leader. Rick then has to face a tough challenge as he must choose between his love for Ilsa and helping her and Victor escape from Casablanca to continue his fight against the Nazis.
Story editor Irene Diamond convinced producer Hal B. Wallis to purchase the film rights to the play in January 1942. The Epstein Brothers were initially assigned to write the script. but had to leave in order to work on Frank Capra's Why We Fight series early in 1942. Howard E. Koch was then assigned to the write screenplay until the Epsteins returned a month later. Principal photography began on May 25th, 1942, and ended on August 3rd. Although it was an A-List film with well established stars, no one involved with its production ever expected it to be anything out of the ordinary as it was just one of hundreds of motion pictures produced by Hollywood every year. While its initial release date was anticipated for the spring of 1943, it ended up getting released much earlier than expected in order to gain publicity after the Allied Invasion of North Africa and the capture of the real Casablanca which occurred a few weeks earlier.

Casablanca had its world premiere on November 26th, 1942 in New York City before being released nationwide on January 23rd, 1943. At the time of its release, the film had only received ‘consistently good reviews’ while some others were less enthusiastic about it. On March 2nd, 1944, Casablanca won three Academy Awards for Best Picture, Best Director (Michael Curtiz), and Best Adapted Screenplay (Phillip G. Epstein, Julius J. Epstein, & Howard Koch). That was the last year the Academy nominated 10 films for Best Picture until 2010. Since then, the film’s reputation has grown overtime as it has constantly been ranked as one of the greatest movies ever made.
Proudly powered by Weebly
KARE REVIEWS