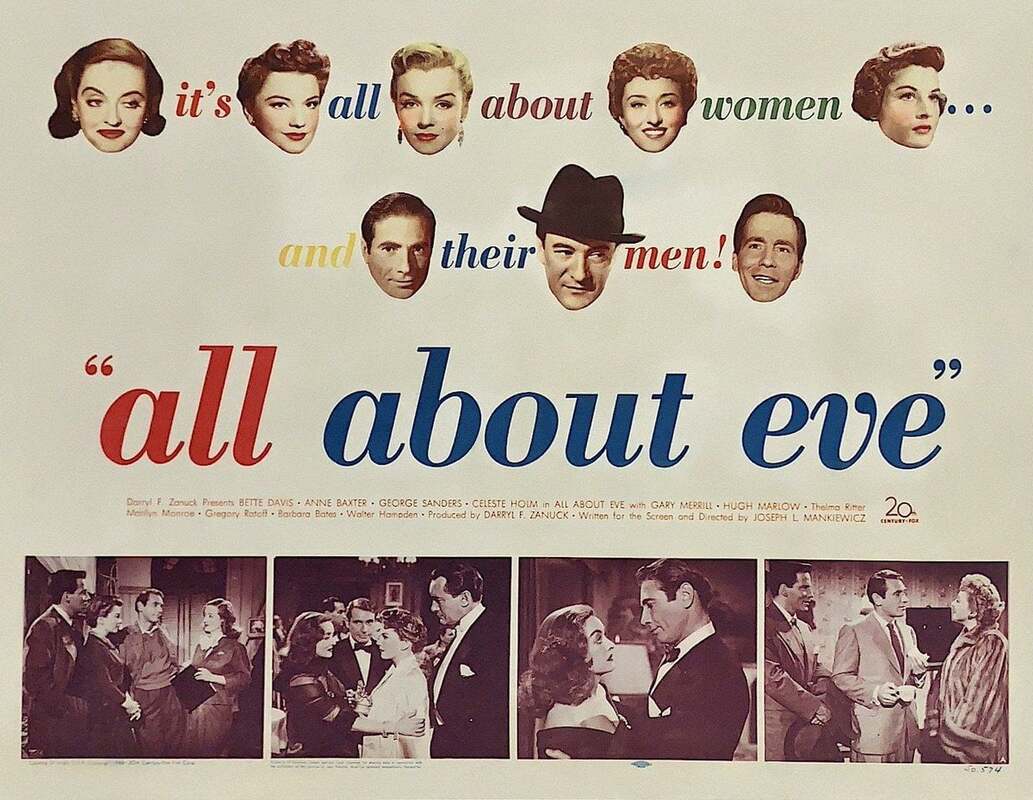 ​Based on Mary Orr's 1946 short story titled The Wisdom of Eve, this movie, under the title of All About Eve, opens at an annual awards ceremony for the Sarah Siddons Society, where young stage actress Eve Harrington (Anne Baxter) is about to be honored with a trophy for distinguished achievement. While most of the audience cheers for this fresh-faced ingénue, a few faces in the crowd look less than pleased, especially fading 'Star of the Theatre' Margo Channing (Bette Davis), puffing away on a cigarette and glowering at Eve with undisguised disgust. We think we understand—Margo is just jealous about losing her spot in the limelight—but it's not nearly that simple. Posh theatre critic Addison DeWitt (George Sanders) intones in voiceover narration about Eve's newfound celebrity: "Eve. Eve the Golden Girl, the Cover Girl, the Girl Next Door, the Girl on the Moon. Time has been good to Eve. Life goes where she goes. She's been profiled, covered, revealed, reported. What she eats and what she wears and whom she knows and where she was, and when and where she's going. Eve. You all know all about Eve. What can there be to know that you don't know?" As it turns out, quite a lot. For example, the fact that this innocent-looking starlet is actually a shrewdly manipulative show-biz bitch who's willing to do whatever it takes to make it to the top.

Told in flashback, the rest of the film chronicles the events leading up to Eve's success. A year prior, she was a lowly secretary who quit her job at a Midwestern brewery and followed the bright lights to Broadway—or so she says—so obsessed with Margo, her idol, that she began going to see every performance of the aging actress' hit play, Aged in Wood. After a not-so-chance encounter with Margo's best friend, Karen (Celeste Holm)— the wife of Aged in Wood playwright Lloyd Richards (Hugh Marlowe)—Eve is invited into Margo's inner circle, where she quickly ingratiates herself. Margo, initially flattered by Eve's showy affection, hires her as an assistant, and Eve uses this position to her full advantage, conspiring to become Margo's understudy and even hitting on both Lloyd and Margo's lover, play director Bill Sampson (Gary Marell), in an attempt to further her nascent career. The only ones to see through Eve's coldly calculated ambition are Margo's observant housekeeper Birdie (Thelma Ritter), and Addison DeWitt, who, in one of the film's most biting monologues, tells Eve, "I'm nobody's fool, least of all yours."
In 1949, filmmaker Joseph L. Mankiewicz came across Mary Orr's original short story, and was immediately interested in the tale about an aging actress. He also felt that a useful element would be the addition of a conniving girl. He sent a memo to producer Darryl F. Zanuck saying it "fits in with an original idea (of mine) and can be combined." Mankiewicz ended up changing the main character's name from Margola Cranston to Margo Channing and retained several of Orr's characters such as Eve Harrington, Lloyd & Karen Richards, and Miss Casswell. Though he also removed Margo Channing's husband completely and replaced him with a new character named Bill Sampson. His intention was to depict Channing in a new relationship and allow Eve Harrington to threaten both Channing's professional and personal lives. Mankiewicz also added his own original characters such as Addison DeWitt, Birdie Coonan, Max Fabian, and Phoebe.

​After having had its world premiere in New York City over two weeks earlier, All About Eve was released in movie theaters nationwide on October 27th, 1950. On a budget of just $1,400,000, the movie was able to gross over $8,400,000 at the worldwide box office. The following year, All About Eve managed to set an all time record as the most nominated film in Oscar history with 14 bids (which it now shares with 1997's Titanic and 2016's La La Land). It's also (currently) the only movie in history to have scored four female acting nominations (Best Actress for Davis & Baxter, Best Supporting Actress for Celeste Holm & Thelma Ritter). The movie ended up winning 6 Academy Awards for Best Picture, Best Director (Joseph L. Mankiewicz), Best Supporting Actor (George Sanders), Best Adapted Screenplay (Joseph L. Mankiewicz), Best Costume Design-Black & White, and Best Sound Recoding. In fact, Mankiewicz not only became the second of three filmmakers to have won Best Director two years in a row*, but he also remains to be the only person in history to have won both that and Best Adapted Screenplay two years in a row as well. His previous wins in those categories were for A Letter to Three Wives in 1949. In the years since, All About Eve has come to be regarded as one of the greatest films of all time and has even spawned a 1970 Tony-winning musical titled Applause.
*The other filmmakers who've won Best Director two years in a row were John Ford (for 1940's The Grapes of Wrath and 1941's How Green Was My Valley) and Alejandro González Iñárritu (for 2014's Birdman and 2015's The Revenant). Though to this day, no director has ever been able to helm two Best Picture winners in back to back years.
Proudly powered by Weebly
KARE REVIEWS