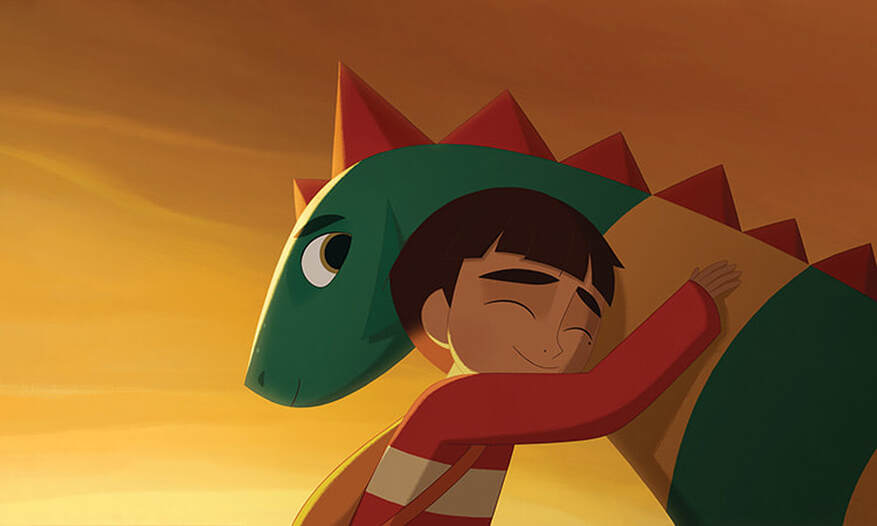 Based on Ruth Stiles Gannett’s 1948 children’s novel of the same name, My Father’s Dragon follows a young boy (Jacob Tremblay) who is having trouble adjusting to his new life. He decides to set out to find a wild island and rescue a young dragon (Gaten Matarazzo). During his adventure, he finds much more than he could ever have anticipated.

The first third of the film does an excellent job of establishing Elmer Elevator as a character in the story. After he’s introduced to the audience, we start to relate to him and the struggles he goes through. Jacob Tremblay provides some great work voicing him. Gaten Matarazzo brings in quite a bit of energy with his voice performance as the dragon, Boris. He not only has a compelling character arc, but the growing friendship he has with Elmer really is the heart and soul of this movie.

The animation is very visually stunning. There’s even some fun images of exposition at certain points throughout. The musical score by the Dyanna brothers is amazing. Not to mention that the sound work on display is pretty intricate. The end climax is so emotionally engrossing. Plus, a touching scene comes following that sequence.

We should all be grateful for indie animation studios like Cartoon Saloon. You certainly don’t see major companies putting out movies like this. No disrespect to CG animation at all, but it’s great that there are people out there who still make 2D animated films. My Father’s Dragon is such a great family friendly fantasy that should be enjoyed by audiences of all ages. It is currently available to stream on Netflix.