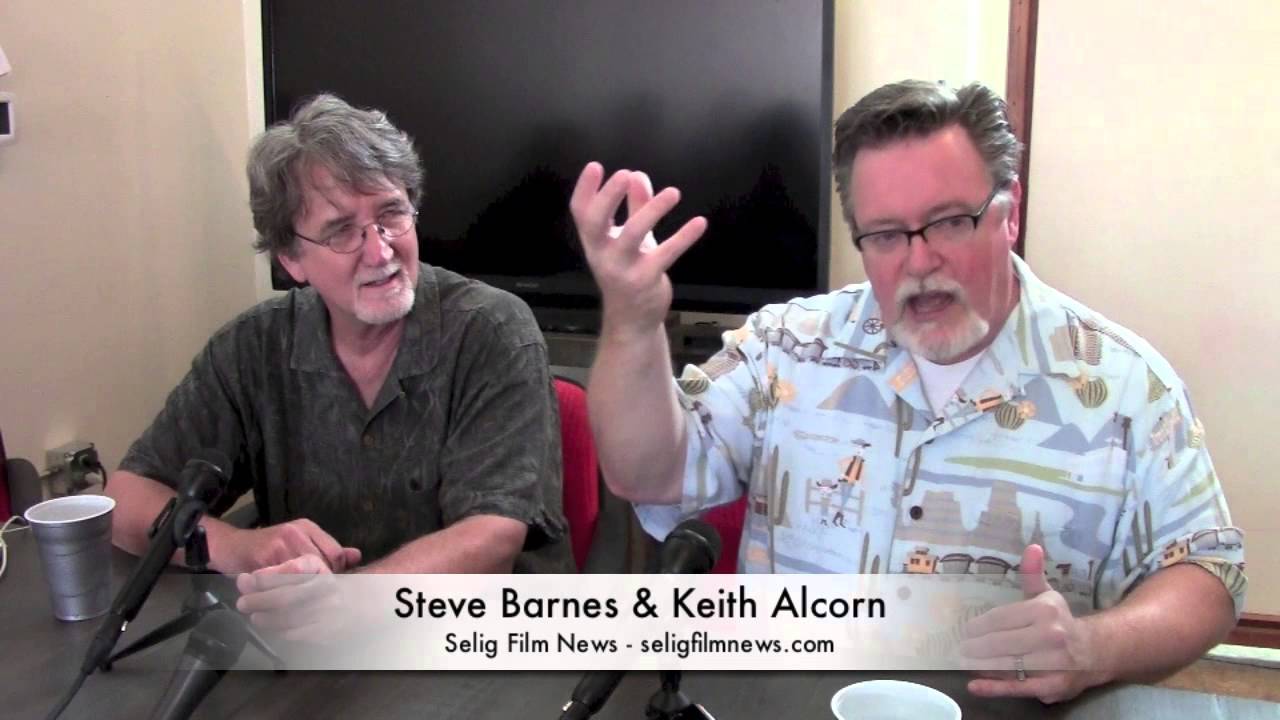 From Left to Right: Steve Barnes with Keith Alcorn
I recently had the great pleasure of interviewing animation filmmaker Keith Alcorn. If you’re not familiar with him, odds are, you are familiar with some of the stuff he’s done. He was an animator and executive producer of the 2001 Academy Award nominated animated film, Jimmy Neutron: Boy Genius, where he also went on to direct episodes of its subsequent TV series on Nickelodeon as well as the short-lived spin-off, Planet Sheen. Some of Keith’s other credits include Santa vs. the Snowman, Olive, the Other Reindeer, The Ant Bully, Owlegories, and many more.
​
JK: To start things off, how did you first get started in animation?
KA:  I have loved animation for as long as I can remember. Like a lot of old animators from my era (back when dinosaurs roamed the earth). I started out doing stop-motion with my 8mm Kodak Brownie (Remember the Brownie? Remember Kodak? Remember film?). It was terrible stuff, but it was a great way to learn from my mistakes.

JK: In 1987, you co-founded DNA Productions with John A. Davis, where the two of you were able to create so many different projects over the years such as Santa vs. the Snowman and Olive, the Other Reindeer. How did the two of you first meet?
KA: John and I first met when I was working at a production studio and he was a student at SMU. I worked in the Art Department and also ran the Animation Camera. John came in for an interview and was immediately hired as an intern. I could tell from his student films that this guy was amazingly talented and could have my job at any time. When he wasn't painting the stage or taking out the trash or cleaning the owner's dog's doo off the carpet, he was in the Art Department working on his next amazing film. I noticed him listening to some cool 80s music (OMD, Yello, Joy Division, Yaz -- ahh, the '80s) and we bonded over our great love of 80s music. We've been friends ever since.

JK: For a while, John Davis had an idea in mind for a character who would later become known to the world as Jimmy Neutron. How did you first come across it?
KA: John had applied for a grant to produce a live-action short called Johnny Quasar. Time passed and eventually it became the foundation for an animated project. Since we owned an animation company, we thought, "Hey, let's produce this as an animated short!" We started working on animation tests for the short and eventually developed it into the little sizzle reel we used to pitch to Nickelodeon.

JK: From what I’ve read, when the idea was pitched to Nickelodeon as an animated series, they already commissioned a 13-minute pilot. Yet, after executives saw the completed pilot, they already raised the prospect of creating a theatrical film to accompany the TV show. In response to that, John suggested that the movie should be made first as he felt the character models and backgrounds would be created at a higher quality than they would have with a TV budget. What was your reaction to the news that you’d be getting a movie first?
KA: Elation sprinkled with a liberal dose of fear. Making a feature film was a huge step for us. But, then again, so was making a series. We quickly learned to keep our heads down and keep working. Don't get overwhelmed.

JK: The movie, which was under the title of Jimmy Neutron: Boy Genius, turned out to be quite a hit at the box office. Not only that, but it also received an Oscar nomination in the very same year the category of Best Animated Feature Film was established. What was it like getting to watch the movie become the success that it was?
KA: One of the most amazingly surreal experiences I've ever, uh...experienced. I remember the morning they announced the Oscar nominations. I knew Monsters Inc. and Shrek would be nominated, but I knew Waking Life was also an Oscar favorite. When they announced us as a nominee, the world went crazy. The phone started ringing, my wife started screaming with joy and I just stared at the screen in disbelief. It was a life-changing moment for sure; not just for me, but for DNA as a company and all our talented artists who made it happen.

JK: I’ve read somewhere that there apparently was a sequel in the works, but ended up getting scrapped. Would you mind telling us more about that?
KA: You read correctly. There was a sequel in the works, but we couldn't agree on a story. Plus, once the TV series came out, there wasn't a lot of incentive to make a movie when fans could simply watch Jimmy at home for free.

JK: How much time was there in between production on the movie and the TV show?
KA: We rolled off the movie and almost immediately into the production of the TV series. Thank goodness! Otherwise, we would've had to lay everyone off, leaving only John and myself to animate the entire series. And yes, that is a joke.

JK: This may be like asking you to pick a favorite child, but are there any episodes of The Adventures of Jimmy Neutron: Boy Genius you directed that you feel most proud of?
KA: It's almost impossible to pick just one, but since you're asking, and I am so accommodating, I might say "Love Potion #976J". It was very popular with the fans and had some sweet musical choreography in it. I wish the show had more music in it, but we had very little time to allow for anything other than normal score. Musical numbers require a lot of planning.

JK: I understand that after the first season, John Davis wasn't as involved with the next two given how busy he was with making the movie, The Ant Bully. How exactly was production on Jimmy Neutron able to go on without him?
KA: The funny thing about working on a TV series -- once you get one season under your belt, it really begins to run itself. The entire production team is in the zone and they have a firm grasp of the Neutron universe. It was actually pretty amazing to watch!

JK: Originally, Jimmy Neutron was going to have a fourth season, but the show ended up getting canceled prematurely. What was your perspective of how that happened?
KA: Actually, the series was never canceled. Nick simply didn't pick up the fourth season. They had all the episodes they needed for syndication and that was that. Nick did order more crossover specials with Fairly Odd Parents.

Q: A few years after the show’s cancellation came a short-lived spin-off series called Planet Sheen. How did the idea for that come about?
A: That is such a long story. It was originally a show called Red Acres. The original didn't have Sheen in it at all. We pitched it to Disney & Cartoon Network, but they passed. I swapped our original protagonist out and brought in Sheen to pitch it to Nick. 5 years after we pitched it to Nick, they greenlit the series. Yes, 5 whole years! Actually, Neutron was pitched in 1995 and didn't get a green light until almost 5 years later. Anyway, back to Sheen, the entire experience was so wrought with lies, inflated ego and backstabbing it became a lowlight in my career. And to top it all off, poor Sheen is stuck on planet Zeenu with a monkey that can barely tolerate him, a gooey version of Carl and a blue girl who loves him like a brother. Sucks to be Sheen.

Q: Two other classic Nicktoons, Rocko’s Modern Life and Invader Zim, recently made their grand return as Netflix movies. Not to mention that Nickelodeon has just hired two new executives to produce content for longform movies and SVOD services. If Jimmy Neutron were to make some sort of comeback on Netflix, would you want to be a part of that?
A: Of course! I love the Neutron universe! In fact, we pitched the exec at Nick a couple of ideas for a reboot. Hopefully, Rocko and Zim do well and Nick sees this as a sign to reboot other franchises. I know Debi Derryberry and Carolyn Lawrence are chompin' at the bit! (not that they are in any way horse-like or wear bridles. They are both quite fetching).

Q: Before we go, do you have any upcoming projects you’d like to share with us?
A: I have been writing, producing & directing a faith-based series called Owlegories for the last few years. It is one of my favorite all-time projects.

Q: Keith, I thank you very much for devoting your time to this interview. It was great getting to talk to you.
A: It has been my pleasure, Jeff! I love looking back at the golden days of DNA and remembering all the amazing people I've had the pleasure to work with. It was a magical time!
Proudly powered by Weebly
KARE REVIEWS