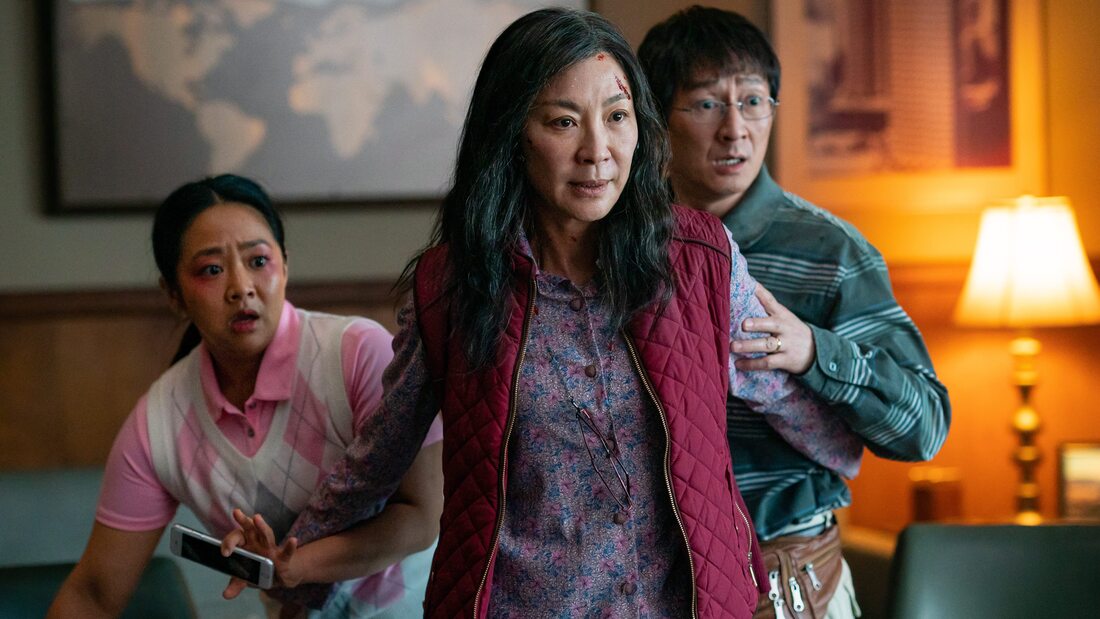 Everything Everywhere All at Once centers on Evelyn Quan Wang (Michelle Yeoh), a Chinese immigrant with a faltering laundromat who has been audited by the Internal Revenue Service. As the Wangs enter the federal building elevator on their way to their meeting with IRS agent Deirdre Beaubeirdre (Jamie Lee Curtis), something weird happens to Evelyn's husband, Waymond (Ke Huy Quan). He quickly attempts to impart a bewildering array of information about alternate universes to her. This results in the unruly audit getting "interrupted" by Evelyn's growing awareness that other realities are beginning to intrude on hers.​

Everything Everywhere All at Once has to be the most original movie I’ve seen in a while. On paper, Daniel Kwan & Daniel Scheinert have both crafted such a mind-blowing concept. In execution, it soars to great heights. It’s so refreshing to see a non-superhero film that deals with the idea of a multiverse. What this does with the concept of a multiverse kind of reminded me of what Christopher Nolan’s Inception did with the concept of dreams. Plus, I found the third act to be so breathtaking.
​
As the unlikely hero of this story, Michelle Yeoh gives a very strong performance both emotionally and physically. The latter in particular especially comes to play in the action scenes where she is a total badass. Though at the heart of it all is the mother-daughter relationship between her and Stephanie Hsu’s character, Joy. Hsu does a very good job in the role. Their chemistry together is really heartfelt. The same can be said for Yeoh's chemistry with Ke Huy Quan.

The crafts on display fire on all cylinders throughout. Larkin Seiple’s cinematography works with a wide variety of different color schemes and aspect ratios for each of the alternate universes we the audience get to visit. Paul Rogers’ editing manages to keep the whole thing together at such a great pace. It especially stands out in the first montage that very cleverly represents how one’s entire life flashes before their very eyes. I also like to give two thumbs up to the sound and VFX work.

In the end, some could find Everything Everywhere All at Once to be confusing and/or weird. Which would be an acceptable opinion to have. However, like a majority of critics and audiences, I was absolutely enthralled by this movie from beginning to end. If you haven't seen it yet, it is now available on DVD, Blu-Ray, and on demand. I think Everything Everywhere All at Once is absolutely worth checking out.