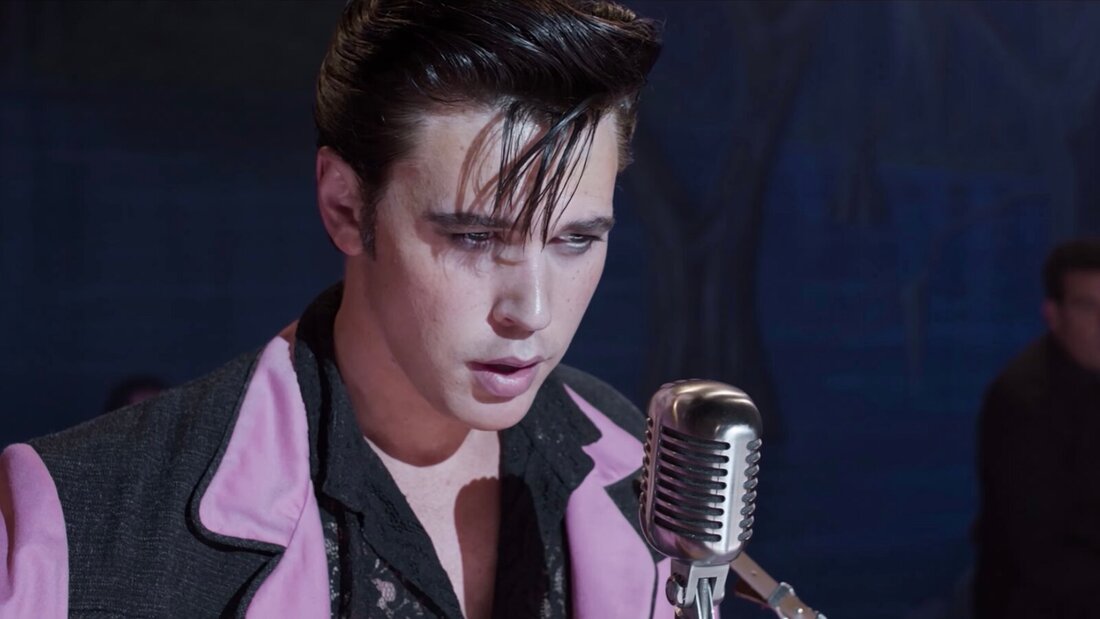 Elvis follows the life and career of Elvis Presley (Austin Butler) as seen through the eyes of his manager, Colonel Tom Parker (Tom Hanks). The story explores the complex dynamic between Presley and Parker spanning over 20 years, from Presley's rise to fame to his unprecedented stardom, against the backdrop of the evolving cultural landscape, and loss of innocence in America. For a while, I avoided this movie like the plague. Anyone who follows me probably knows by now about how much I am NOT a Baz Luhrmann fan at all. I respect the vision and ambition he goes for in his films, but his bombastic style is just simply not my cup of tea. Yet as it's apparently going to be a presence this awards season, the bullet has officially gotten to me.

This is clearly a Baz Luhrmann movie from beginning to end. Very visually appealing thanks to his wife, production and costume designer Catherine Martin. Contemporary music incorporated into a period setting where it doesn’t belong at all. Super chaotic editing that feels as if it was done by a chimpanzee. While it’s not as cartoonish as it felt in Romeo + Juliet nor Moulin Rouge!, Baz still needs to slow the f*ck down in that department. There’s barely any shots that last more than 5 seconds long. I know a number of people are going to argue that Baz’s editing style has a purpose, but that still doesn’t automatically make it good editing.

I admire Austin Butler’s work as Elvis Presley. However, his performance to me comes off more as an impersonation than an actual portrayal. Plus, there isn’t really enough of a focus on him due to this questionable framing device where the story is told from the perspective of Colonel Tom Parker. Speaking of which, Tom Hanks is just so miscast in that part. If you look up interviews with the real Tom Parker, Hanks in this movie didn’t look nor sound anything like him one bit. He’s also so over the top which is completely unnecessary. To quote Jack Lemmon’s character in Some Like It Hot, “And what’s with the phony accent?!” Hanks appears to struggle with it at certain points that he ends up breaking into his real voice.

While this movie tries a different approach from what we typically see in musician biopics, it still just goes through the major bullet points of Elvis Presley’s life. The result is a very long finished product that I thought would never end. In certain scenes that were supposed to be emotional, I was more bored than moved. I also couldn’t get past how Colonel Tom Parker aged a lot over the course of the film while Elvis looked exactly the same throughout. If you want to see a biographical presentation about The King of Rock and Roll, I’d recommend checking out the 2005 television miniseries instead.