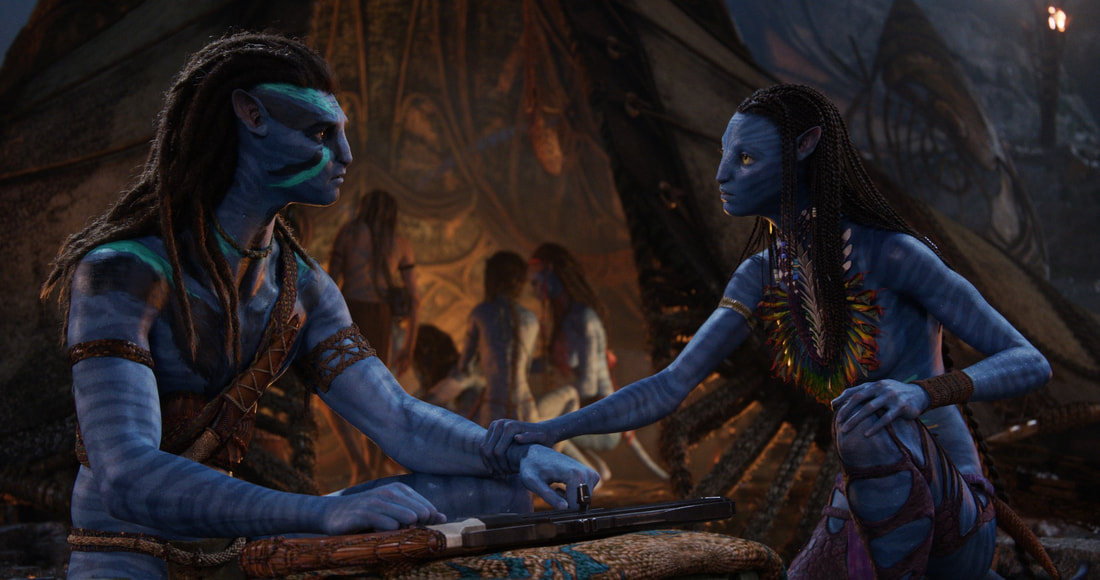 In 2009, James Cameron delivered his first feature film since Titanic 12 years earlier with Avatar. It was not only a huge game changer in big budget filmmaking, but it also went on to dethrone the former as the highest-grossing movie of all time at the worldwide box office. Although it has proven to be very polarizing since it originally debuted. There are detractors out there who don't think the whole is as good as the visuals, criticize the screenplay, and make fun of the story for being a science fiction knockoff of Dances with Wolves, FernGully, and Pocahontas. They have also questioned if the movie is even relevant in pop culture anymore (despite it spawning a successful themed area in Walt Disney World). Not to mention that four planned sequels have literally been delayed 8 times at this point. As a result, people have made jokes about why it's taking so long, if they're ever going to be released, and/or if they even feel necessary. Well 13 years later, Avatar: The Way of Water is finally out.

Set 14 years after the events of the first film, Jake Sully (Sam Worthington), a former human turned alien, lives with his newfound family formed in the world of Pandora. When a familiar threat returns to finish what was previously started, Jake must work with Neytiri (Zoë Saldaña) and the army of his Na’vi race to protect their planet. To give you a bit of background about me, I saw the original Avatar in theaters when it was first released…three times.

While I wouldn’t necessarily hail it as one of the greatest movies ever made, it still holds a very special place in my heart. The experience of seeing that on the big screen in 3D was truly something to behold. I rewatch it once in a while, and whenever I do, I still get a kick out of it. James Cameron discussed interest in making sequels prior to the release of the first film. I knew that going into Avatar during opening weekend. I especially remember that by the time it ended, I was immediately like “I want a sequel!.”

After 13 years, Avatar: The Way of Water is absolutely worth the wait! The visuals alone from the creatures to the locations are very top notch. Weta continues to push boundaries of what can be done with photo realistic VFX work to amazing results. The soundscape is incredible. Simon Franglan has crafted quite a majestic musical score that also successfully incorporates the late James Horner’s themes from the first film. The editing by Stephen E. Rivkin, David Brenner (R.I.P.), John Refoua, and James Cameron himself keeps this three-hour epic moving at a great pace. There are so many breathtaking moments on display. Not just visually, but also emotionally.

People were mixed on Sam Worthington’s performance in the original. Some liked him, others found him to be a pretty boring lead. I may have been in the former group, but he is definitely much better here. Jake Sully has so many responsibilities now as a leader, husband, and father, and I thought Worthington handled them very well. Zoë Saldaña may not have as much to do in this installment, but she continues to be really strong and fierce as Neytiri. Despite getting killed at the end of the first film, Stephen Lang is back as Colonel Miles Quaritch, and he’s even more menacing than ever.

Of the new characters, the kids are the ones who make the biggest impressions. Jamie Flatters, Britain Dalton, and Trinity Jo-Li Bliss all work so well together as Jake and Neytiri’s children. Sigourney Weaver is terrific as their 14-year-old adopted daughter, Kiri. That character also happens to have a special connection to Dr. Grace Augustine, who Weaver previously played in the first movie. Jack Champion as Spider, a human boy who was born on Pandora, has a really interesting arc. I also liked Cliff Curtis as Tonowari, the chief of the reef people clan of Metkayina, as well as Kate Winslet as his wife, Ronal.

The Way of Water has some sequences that are reminiscent of events from the original, but Cameron does make them more than different enough here. If you’re a fan of the first movie, you won’t be disappointed. If you weren’t a fan, then I don’t know what to tell you. What I will say though is that the whole experience for me of watching this in IMAX 3D was so immersive. Not to mention that I was very moved at certain points. No matter what format you end up seeing it in, be sure to catch Avatar: The Way of Water on the biggest screen possible.