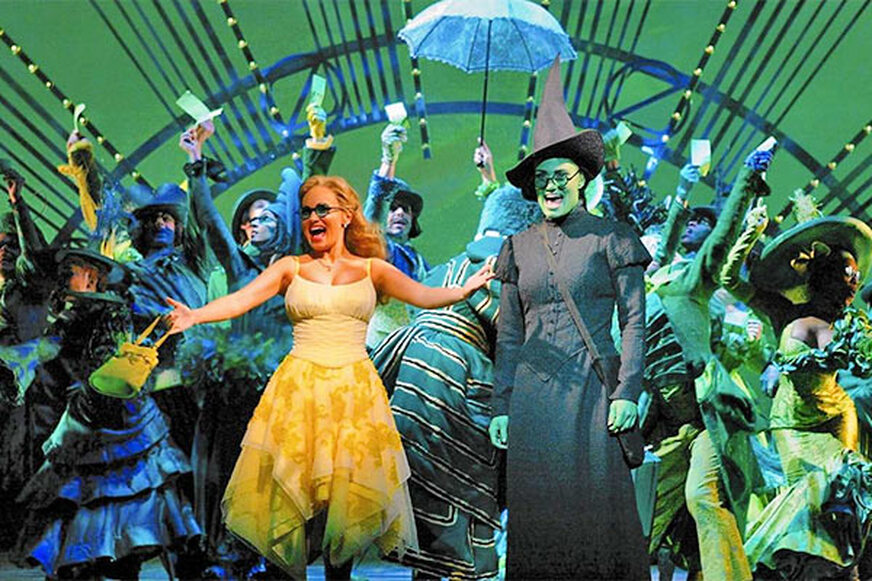 Welcome back to my 'And the Tony Almost Went to...' series, where I take a deep dive into a show that was the (likely) runner-up in the Best Musical race of any previous Tony Awards year. One of this year's nominees for Best Featured Actor in a Musical is Norbert Leo Butz for his performance as Alfred P. Doolittle in Lincoln Center's revival of My Fair Lady. Not to mention that Best Musical nominee, Frozen, is based off of an animated film that featured Idina Menzel as a misunderstood girl with magical powers. Today, we'll be looking back at a little known show that Norbert & Idina did together which was also about a misunderstood girl with magical powers.
Based on Gregory Maguire's 1995 novel titled Wicked: The Life & Times of The Wicked Witch of the West, this musical tells the story of The Wizard of Oz from the witches' perspective long before Dorothy dropped in. Wicked follows two unlikely friends, Elphaba (the Wicked Witch of the West) and Glinda the Good, who struggle through opposing personalities and viewpoints, rivalry over the same love-interest, reactions to the Wizard's corrupt government, and, ultimately, Elphaba's public fall from grace.

Originally, Universal Pictures planned to produce a film adaptation of Maguire's novel. However, it was composer/lyricist Stephen Schwartz who was so intrigued by the concept, that he pleaded to producer Marc Platt about doing Wicked as a Broadway musical instead. Platt agreed to the idea, so he therefore signed onto the project as a joint producer with Universal and David Stone.

​After having its world premiere at the Curran Theatre in San Fransisco, California, Wicked opened on October 30th, 2003 at the Gershwin Theatre on Broadway. The original cast included Idina Menzel as Elphaba, Kristin Chenoweth as Glinda, Norbert Leo Butz as Fiyero, Michelle Federer as Nessarose, Christopher Fitzgerald as Boq, Carole Shelley as Madame Morrible, William Youmans as Doctor Dillamond, and Joel Grey as The Wizard.

​After sweeping through the precursor prizes such as the Outer Critics Circle, Drama League, and Drama Desk Awards, Wicked looked like the one to beat going into the Tonys that year. Yet, along came a huge upset by an underdog known as...
Why Didn’t Wicked Win?: While the show was the hit of the 2003-04 Broadway season, it still met with some very mixed critical reviews (including a pan from the New York Times). New York Post columnist Michael Riedel did report that not all Tony voters liked Wicked (some of them thought the show was overblown and bloated), but nearly everyone of them was thrilled that it overcame some pretty negative reviews to emerge as the biggest musical of the season. However, it is worth noting that while director Joe Mantello was nominated (and eventually won) that year for the Broadway premiere of Stephen Sondheim & John Weidman's Assassins, he wasn't nominated for Wicked. To date, the last time that a show has won Best Musical without a directing nomination was Titanic​ back in 1997.

​Meanwhile, Avenue Q (which at the time opened way back in the summer of 2003, yet fell off of people's radar) pretty much spent every single day during Tony season campaigning like crazy. Not only did the producers of that show announce that it was going on tour, but when the out-of-town voters came to New York for the League of American Theaters and Producers’ annual spring road conference, campaign buttons were passed out that said "Don't Suck - Vote Q". The whole cast even performed a song that went “Wicked may be the big commercial hit, but we’re cuter, we’ve got more artistic merit, you know you really love us, so forget about your wallet and vote for us!" While the out-of-town producers loved every minute of it, the people behind Wicked were pretty annoyed. They didn’t think it was fair to suggest that their show lacked artistry and was the frontrunner only because of its commercial success.

On Tony night in 2004, Avenue Q ended up winning 3 awards for Best Musical, Best Book of a Musical (Jeff Whitty), and Best Original Score (Robert Lopez & Jeff Marx). In fact, at the end of the night, producer Jeffrey Seller said "Thank you Broadway for voting your heart!". A few days later, it was revealed that the previously announced tour for Avenue Q was fake because the producers were only able to make an exclusive deal with Las Vegas where the show would not tour while a production was running there. Many of the out-of-town producers who voted for Avenue Q​ were very furious when they all learned the truth. Eventually, Avenue Q did tour, ran six years on Broadway, and is still running in New York, albeit, off-Broadway. Wicked, on the other hand, is still running all over the world, and clearly didn't need the Tony to stay alive.

Though given that Marc Platt would later go on to produce the movie musical, La La Land, I can't help but wonder what it would've been like had Nathan Lane & Sarah Jessica Parker accidentally been handed the wrong envelope, and Wicked was actually crowned the winner for Best Musical at first...
Proudly powered by Weebly
KARE REVIEWS