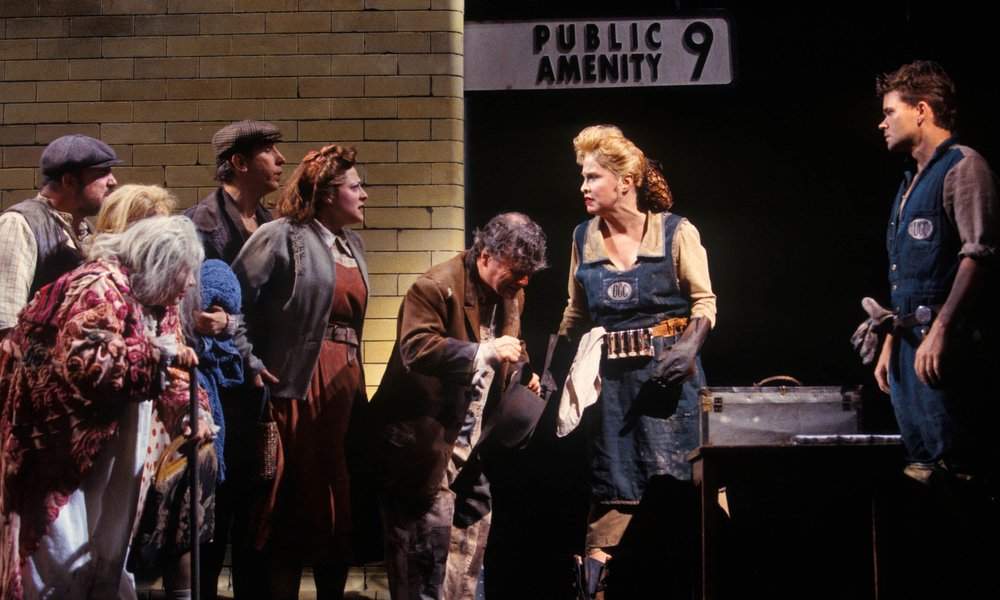 Welcome back to my 'And the Tony Almost Went to...' series, where I take a deep dive into a show that was the (likely) runner-up in the Best Musical race of any previous Tony Awards year. Whether any of you may or may not have already heard, all of Broadway has been shutdown until further notice due to the coronavirus pandemic. As a result, this year's Tony Awards have been postponed indefinitely. While it's probably gonna be a long wait until this pandemic clears up, something I am planning to keep everyone occupied in the meantime is more features in this series. Today, we'll be talking about 2002.
Urinetown is a completely original musical satire inspired by the works of Bertolt Brecht and Kurt Weill. The story is set in a Gotham-like city where a terrible water shortage, caused by a 20-year drought, has led to a government-enforced ban on private toilets. The citizens must use public amenities, regulated by a single malevolent company that profits by charging admission for one of humanity's most basic needs. Amid the people, a hero decides that he's had enough and plans a revolution to lead them all to freedom.

Book writer/co-lyricist Greg Kotis came up with the idea for Urinetown after encountering a pay toilet while he was a traveling student on a budget in Europe. He then began writing the musical with composer/co-lyricist Mark Hollmann. Though at first, no production companies were interested in producing the Urinetown at all. Then, the Neo-Futurists, an experimental theatre group from Chicago, optioned the show for their 1999–2000 season, but those plans fell through. So Urinetown finally made its world premiere at the New York International Fringe Festival. Playwright David Auburn, who was a friend of Kotis & Hollmann, came to see the show and immediately called a production company titled The Araca Group to option the musical.
​
​After a successful run Off-Broadway at the American Theatre for Actors, Urinetown opened on September 20th, 2001 at the Henry Miller (now Stephen Sondheim) Theatre on Broadway. The show was originally set to open on September 13th, but it got delayed at the last minute due to the horrific events of 9/11. The original cast included Hunter Foster as Bobby Strong, John Cullum as Caldwell B. Caldwell, Jennifer Laura Thompson as Hope Caldwell, Nancy Opel as Penelope Pennywise, Jeff McCarthy as Officer Lockstock, Spencer Kayden as Little Sally, Daniel Marcus as Officer Barrel, David Beach as Mr. McQueen, John Deyle as Senator Fipp, Ken Jennings (not the Jeopardy champion) as Joseph “Old Man” Strong/Hot Blades Henry, Kay Walbye as Old Woman/Josephine “Ma” Strong, Jennifer Cody as Little Becky Two Shoes/Mrs. Millennium, Rachel Coloff as Soupy Sue/Caldwell’s Secretary, Rick Crom as Tiny Tom/Dr. Billeaux, Victor W. Hawks as Robbie the Stockfish/Business Man #1, and Lawrence Street as Billy Boy Bill/Business Man #2.

​Yet, it was a much more traditional musical (starring Hunter Foster's sister) that was the toast of the Broadway season.
Why Didn't Urinetown Win?: According to the New York Times' survey that year, the factors that were working in Thoroughly Modern Millie's favor was its timing (it opened in April of 2002 while Urinetown in September of 2001) and its middle-of-the-road appeal (the word ''urine'' did not appear in its title). It did not help Urinetown that one of its producers, Dodger Theatricals, withdrew from the league of producers earlier that year, perhaps making some institutional enemies. Though in the end, the race may have been much simpler than that. One voter specifically told the Times: ''It's a process of elimination. None of the shows are perfect. It's just that Millie is the least imperfect.'' It's also worth noting that this was the first Tony Awards to have taken place post 9/11. When the World Trade Center collapsed, the whole world (including Broadway) took time to fully recover from that tragic day. By the time Thoroughly Modern Millie opened, it was just the gift audiences were looking for as it was a feel good musical comedy that also happened to have been a love letter to New York City.

Though the Times also suggested that the race for Best Direction of a Musical was apparently a dogfight between Michael Mayer for Thoroughly Modern Millie and John Rando for Urinetown, both of whom at the time were relative newcomers. Mayer seemed to have had a slight edge there as momentum built for his show's Best Musical chances. Though some believed that Rando would be rewarded there for shepherding his show from downtown to up. As for Best Choreography, Susan Stroman was the unanimous choice among those surveyed for her work on the 2002 revival of Oklahoma!.

​Meanwhile, Best Featured Actress in a Musical that year was really such a toss-up. There was Laura Benanti, a rising star at the time in a tough role: Cinderella in the 2002 revival of Into the Woods. She was already well liked in the industry and very pretty to boot. There was Harriet Harris, an industry veteran who at that point, never got the recognition she deserved. She was also well respected in Thoroughly Modern Millie, a show with a winning buzz. There was Spencer Kayden, a winning comic actress and Broadway newcomer in Urinetown. There was Andrea Martin, another comic talent, putting her stamp on a classic American role: Aunt Eller in Oklahoma!. She was the dark horse, but her name has popped up more and more in the days leading up to the awards. Then, there was Judy Kaye, who was not going to win, but would have steady work to look forward to as her show, Mamma Mia!, was the season's hottest seller. The Times ended up suggesting that Benanti would win.

At the ceremony, Thoroughly Modern Millie won 6 Tony Awards for Best Musical, Best Lead Actress in a Musical (Sutton Foster), Best Featured Actress in a Musical (Harriet Harris), Best Choreography (Rob Ashford), Best Orchestrations (Doug Besterman & Ralph Burns), and Best Costume Design (Martin Pakledinaz). Those surprise wins for Featured Actress and Choreography especially had to have been the signal that Millie was winning big. ​Not to mention that it was the show that made Sutton Foster a bonafide Broadway star. Prior to Millie, she had been seen as a replacement in the 1990s revival of Grease as well as in the ensemble of the 1997 revival of Annie, The Scarlet Pimpernel, and Les Misérables. Originally, Sutton was cast in Thoroughly Modern Millie as an understudy, but by some strange turn of events, she ended up in the starring role by the time the show premiered at the La Jolla Playhouse in California.

​To me, this appeared to be another example of one of those years where if there was a close race for Best Musical, voters decided that by giving one show Book and Score, that would let them off the hook so they could spread the wealth by giving the top prize to something else. Though nowadays, if a show like Urinetown were to win Book, Score, and Directing, then that would pretty much seal the deal for its chances in Best Musical. I even remember reading a comment in the message boards at BroadwayWorld multiple times saying "I'm still mad about Urinetown not winning." I will say that if this Tony race was taking place today, it would be really interesting to see how it would turn out given the times we're currently living in.
Proudly powered by Weebly
KARE REVIEWS