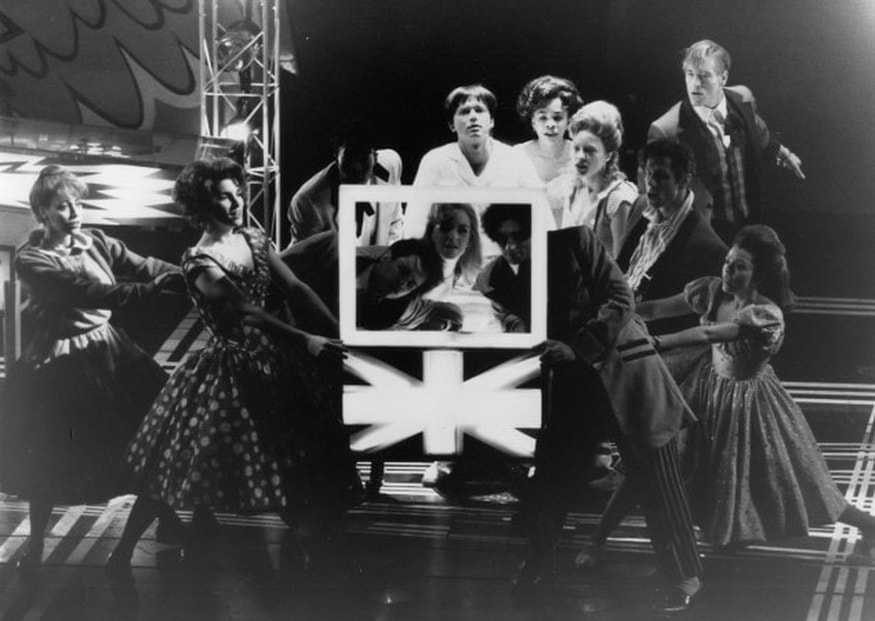 Welcome back to my 'And the Tony Almost Went to...' series, where I take a deep dive into a show that was the (likely) runner-up in the Best Musical race of any previous Tony Awards year. Tonight marks the opening of a new jukebox/biomusical about The Temptations titled Ain't Too Proud. It is directed by Des McAnuff, who has previously done other shows that utilized pre-existing catalogues of songs such as Jersey Boys and Summer: The Donna Summer Musical. Today, we'll be taking a look back at the very first one he did as well as its success at the Tonys.
Based on The Who's 1969 concept album titled Tommy, the rock opera follows a deaf, dumb, blind boy who after witnessing the accidental murder of his mother's lover by his father, he is traumatized into catatonia. As Tommy grows up, he suffers abuse at the hands of his sadistic relatives and neighbors. As an adolescent, he's discovered to have an uncanny knack for playing pinball and, when his mother finally breaks through his catatonia, he becomes an international pinball superstar.

Musician Pete Townshend came up with the idea of Tommy after being introduced to the work of Meher Baba, and attempted to translate Baba's teachings into music. After spending six months in the recording studio, the album was finally released to critical acclaim on May 23rd, 1969. Many hailed Tommy as The Who's breakthrough and has since become an important and influential album in the history of rock music. In 1991, Pete Townshend was introduced to La Jolla Playhouse Artistic Director Des McAnuff, and the pair began to develop a stage musical adaptation together.
​
After having its world premiere at the La Jolla Playhouse in La Jolla, California, The Who's Tommy opened on April 22nd, 1993 at the St. James Theatre on Broadway. The original cast included Michael Cerveris as Tommy, Jonathan Dokuchitz as Captain Walker, Marcia Mitzman as Mrs. Walker, Anthony Barrile as Cousin Kevin, and Paul Kandel as Uncle Ernie. Not to mention that the ensemble featured a who’s who of future Tony nominees/winners such as Christian Hoff, Norm Lewis, Michael McElroy, Alice Ripley, and Sherie Rene Scott.

Yet, despite being one of the shows that sparked Broadway’s resurgence in the 1990s, shaking up an industry that had grown musty with second-rate revivals and long-running British pop operas from the ’80s, it ended coming up short to...
Why Didn’t The Who's Tommy Win?: It appears that a lot of the older Tony voters back then would just never respond to a musical like this. As many fans Tommy had, it was never going to appeal to the older matinee audience. Plus, this Tony race does seem to be comparable to more recent races like Once winning over Newsies, Gentleman's Guide winning over Beautiful, and Fun Home winning over An American in Paris​. Tommy was already guaranteed to have such a successful life beyond Broadway, that voters probably felt the show didn't need the Tony.

​Meanwhile, Kiss of the Spider Woman had a much more respected creative team behind it. Director Hal Prince, book writer Terrence McNally, and the songwriting team of John Kander & Fred Ebb. Not to mention that it had more gravitas than Tommy​. In the end, Kiss of the Spider Woman won 7 Tony Awards for Best Musical, Best Lead Actor in a Musical (Brent Carver), Best Lead Actress in a Musical (Chita Rivera), Best Featured Actor in a Musical (Anthony Crivello), Best Book of a Musical (Terrence McNally), Best Original Score (John Kander & Fred Ebb; in a tie with The Who's Tommy), and Best Costume Design (Florence Klotz).
Proudly powered by Weebly
KARE REVIEWS