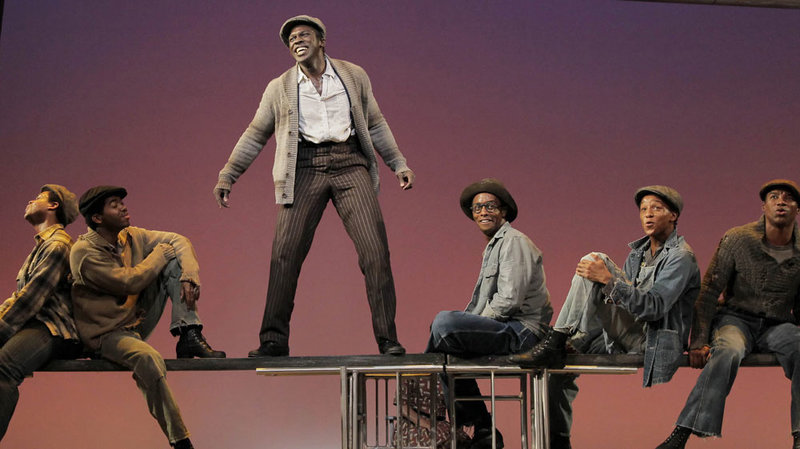 Welcome back to my 'And the Tony Almost Went to...' series, where I take a deep dive into a show that was the (likely) runner-up in the Best Musical race of any previous Tony Awards year. Every week leading up to this year's telecast, I'm covering each of the remaining runners-up from this past decade that I haven't already. This week, we'll be talking about 2011.
The Scottsboro Boys is set in the prejudicial south of the 1930s, and tells the true story of nine African-American boys who were ripped from a train and accused of rape by two white women. Hauled to jail without a shred of actual evidence against them, the Scottsboro Boys were rushed through trial procedures, found guilty, and sentenced to death. What occurred in the years following the trials was a harrowing tale of bravery and strength in the face of great adversity.

​In 2002, director/choreographer Susan Stroman met with book writer David Thompson, composer John Kander, and lyricist Fred Ebb about some other project. The team began to research famous American trials and found out about the Scottsboro Boys trial, which they thought was "a story that needed to be told." Though after Ebb died of a heart attack in 2004, the project was put on hold. In 2008, Kander reapproached Stroman and Thompson, and the project continued with Kander finishing the lyrics in Ebb's place.

​Yet, despite all the acclaim and respect it received, something went wrong, and along came the surprise hit of that season.
Why Didn't The Scottsboro Boys Win?: On the one hand, the show flopped. Its subject matter was a hard sell to the general public, especially around the holidays. The Scottsboro Boys ended up closing at a monumental loss on December 12th of that year after only 6 weeks of performances. You have to go all the way back to 1968 when a closed show (in this case being Hallelujah, Baby!) won the Tony for Best Musical. Meanwhile, The Book of Mormon was a musical that going into the season, no one thought would ever have mainstream appeal. People were thinking that it might end up being too controversial and too foul-mouthed to achieve success. However, The Book of Mormon pretty much became Broadway's biggest juggernaut of a hit since The Producers 10 years earlier.

While many people were predicting a sweep, there was a feeling that Tony voters would spread the wealth by giving Best Original Score to The Scottsboro Boys. That category not only would've been the best place to have awarded the show itself, but it also probably would've been the last chance for voters to celebrate the legendary songwriting team of Kander & Ebb. According to the New York Times' survey that year, Best Original Score was indeed a toss-up. The Book of Mormon had some of the season’s most memorable numbers like the opener 'Hello!' and a sweetly rendered but profane song about God. But nearly as many voters favored The Scottsboro Boys in that category.