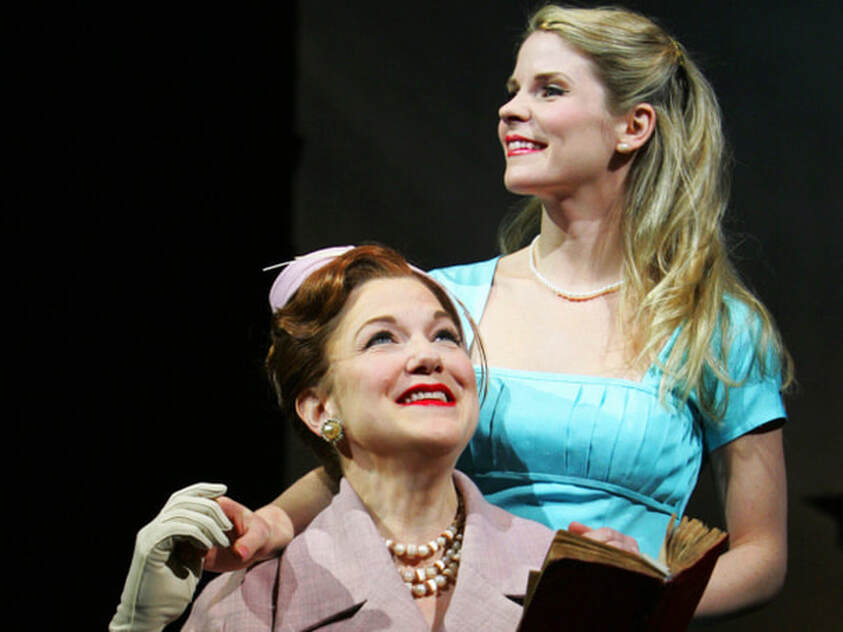 Welcome back to my 'And the Tony Almost Went to...' series, where I take a deep dive into a show that was the (likely) runner-up in the Best Musical race of any previous Tony Awards year. Tonight marks Kelli O'Hara's grand return to the Great White Way in Roundabout Theatre Company's revival of Kiss Me, Kate. Today, we'll be looking back at the show that earned Kelli her very first nomination as well as its success at the Tonys.
Based on Elizabeth Spencer's 1960 novella of the same name, The Light in the Piazza is set in the 1950s and revolves around Margaret Johnson, a wealthy Southern woman, and her daughter, Clara, who is developmentally disabled due to an unfortunate encounter with her birthday pony. The two spend a summer together in Italy. When Clara falls in love with a young Italian man, Margaret is forced to reconsider not only Clara's future, but her own deep seated hopes and regrets as well.

After having made a name for himself writing Off-Broadway musicals such as Floyd Collins and Saturn Returns, The Light in the Piazza marked the very first Broadway musical written by Richard Rodgers' grandson, Adam Guettel. He was introduced to the original novella after his mother, Mary Rodgers, suggested he should take a look at it. As he was reading the novella, Guettel fell in love with what he called "the emotional ambition of the story. Not a simple love story with an unambiguously happy ending." Part of the satisfaction for him was the very ambiguity of the story.

​After having debuted at the Intiman Playhouse in Seattle and Goodman Theatre in Chicago, The Light in the Piazza opened on April 18th, 2005 at the Vivian Beaumont Theatre in Lincoln Center on Broadway. The original cast included Victoria Clark as Margaret Johnson, Kelli O’Hara as Clara Johnson, Matthew Morrison as Fabrizio Naccarelli, Michael Berresse as Giuseppe Naccarelli, Sarah Uriarte Berry as Franca Naccarelli, Patti Cohenour as Signora Naccarelli, Beau Gravitte as Roy Johnson, and Mark Harelik as Signor Naccarelli.

Yet, despite winning the most awards of the night, The Light in the Piazza still couldn't overcome the smash hit of the season that was...
Why Didn’t The Light in the Piazza Win?: This was a very competitive race for Best Musical. According to the New York Times' survey that year, while Dirty Rotten Scoundrels and The Light in the Piazza were apparently closing in on the competition, The 25th Annual Putnam County Spelling Bee and Monty Python's Spamalot were the two names mentioned most as winners in this category. But a majority of the voters surveyed expected Spamalot to carry the day. A Tony handicapper told the Times that with a $27,000,000 advance and steady press coverage, "It's got too much to deny."

​New York Post columnist Michael Riedel also reported that the nominating committee back then admired The Light in the Piazza more than they actually liked it. They praised Adam Guettel's dense and complex score, the beautiful sets, and Victoria Clark's performance, but they found the whole thing dull. When Riedel interviewed Tony voters later in the season, there were fans who thought it was deeply creative, beautifully designed, and truly heartfelt with a shimmering, ambitious score. Yet, detractors apparently fell asleep, calling the show dramatically inert without any hummable melodies.

Not to mention that the eventual winner, Monty Python's Spamalot, pretty much fit into the mold of shows that were winning Best Musical in the early 2000s, big musical comedies based on cult films. It was definitely like that three years in a row with The Producers, Thoroughly Modern Millie, and Hairspray​ each taking the crown. Also keep in mind that the year was 2005, where back then, George W. Bush had recently started his second term in office. So it seems that Tony voters at the time wanted to rally more behind a feel good musical comedy that made them "look on the bright side of life." Monty Python's Spamalot ended up winning 3 Tony Awards for Best Musical, Best Featured Actress in a Musical (Sara Ramírez), and Best Direction of a Musical (Mike Nichols).

I know some of you are probably wondering why did I settle on The Light in the Piazza as the (likely) runner-up as opposed to Spelling Bee. Especially given how the latter show won two major awards for Featured Actor (Dan Fogler) and Book. For one, the fact that the former show won the most awards of the night but not Best Musical is absolutely nothing to sneeze at. Plus, of the four nominees that year, it was the apple in a bag of oranges (or vice versa) given that all three of its competitors were musical comedies of some sort. Though if this race was taking place today, we'd probably see it more between Spelling Bee and The Light in the Piazza given the originality and artistic integrity of both those shows.
Proudly powered by Weebly
KARE REVIEWS