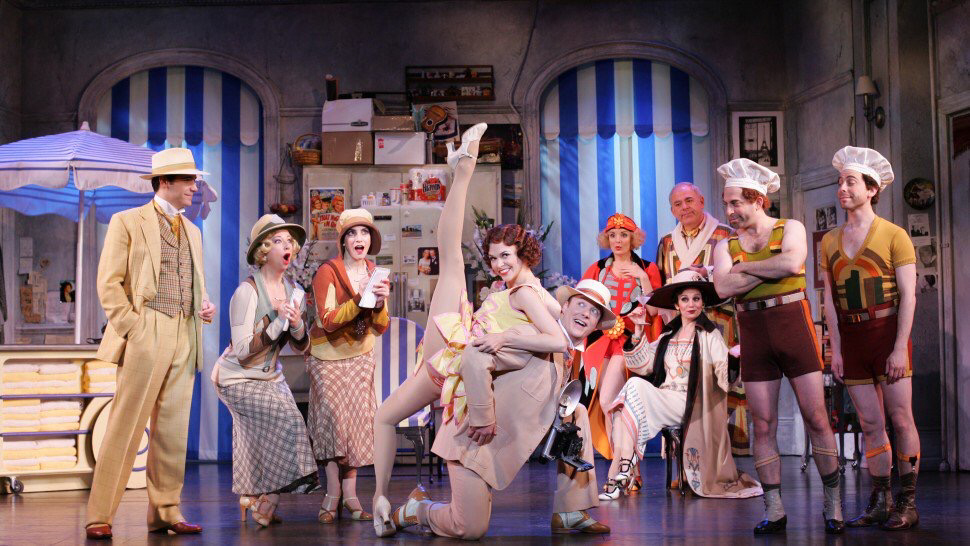 Welcome back to my 'And the Tony Almost Went to...' series, where I take a deep dive into a show that was the (likely) runner-up in the Best Musical race of any previous Tony Awards year. Tonight marks the opening of a new Broadway musical called The Prom​, which features Beth Leavel in the cast, with a book co-written by Bob Martin, and is directed & choreographed by Casey Nicholaw. Today, we'll be looking back at the show that marked the very first time all those talents got to work together as well as its success at the Tonys.
The Drowsy Chaperone is a parody of American musical comedies of the 1920s. The story concerns a middle-aged, asocial musical theatre fan. As he plays the record of his favorite musical, the (fictional) 1928 hit The Drowsy Chaperone, the show comes to life onstage as he wryly comments on the music, story, and actors.

The musical itself began in 1997 when Don McKellar, Lisa Lambert, Greg Morrison, and several friends created a spoof of old musicals for the stag party of Bob Martin and Janet van de Graaf. They loved it so much, that they knew they had to do something with the material. Martin then collaborated with McKellar on the book to create a full-length musical, including a central lead who served as a narrator known as The Man in the Chair.

After having gone through so many iterations, The Drowsy Chaperone finally came to Broadway with very little buzz, opening at the Marquis Theatre on May 1st, 2006. The original cast included Bob Martin as The Man in the Chair, Sutton Foster as Janet van de Graaff, Beth Leavel as The Drowsy Chaperone, Danny Burstein as Aldolpho, Troy Britton Johnson as Robert Martin, Eddie Korbich as George, Georgia Engel as Mrs. Tottendale, Edward Hibbert as Underlining, Lenny Wolpe as Feldzieg, Jennifer Smith as Kitty, Kecia Lewis-Evans as Trix, Jason Kravitz as Gangster #1, and Garth Kravitz as Gangster #2.

Going into the Tonys that year, industry insiders and voters were all over the place with their predictions/votes. The Drowsy Chaperone had the benefit of being the only original musical of that season, and not an adaptation of any pre-existing source material. Yet, despite winning the most awards of the night on the musical side, it still couldn't overcome the smash hit of the season that was...
Why Didn’t The Drowsy Chaperone Win?: According to the New York Times' survey that year, the race for Best Musical between The Drowsy Chaperone and Jersey Boys was a complicated one. When the latter show first came to Broadway earlier in the fall, there wasn’t a whole lot of anticipation for it. Ever since Mamma Mia! became the hit that it was, producers were trying to cash in on it by creating their own jukebox musicals. Yet, the shows that came after that such as Good Vibrations, All Shook Up, and Lennon had failed. So a lot of critics went into Jersey Boys expecting to hate it like they did with previous jukebox musicals, but they came out of the August Wilson Theatre pleasantly surprised. Jersey Boys not only became the hit of that season, but many people felt that it broke the mold of the jukebox musical by telling the true story behind the music as opposed to a made up story centered around a music catalogue.

Then The Drowsy Chaperone came along, aroused the nostalgia of Broadwaygoers, and suddenly there was a backlash. While Jersey Boys was an enjoyable jukebox musical, it was still a jukebox musical, which is a lower form of musical theater disdained by purists. Thus a show that people liked became a show that people objected to on principle. ​Those purists also sniffed that Jersey Boys was essentially an all-male (and white) Dreamgirls, which was loosely based on Diana Ross and the Supremes, and therefore lacked originality. When New York Post columnist Michael Riedel surveyed 12 Tony voters, they were split down the middle. He even reported that someone who voted for Jersey Boys paused before marking his ballot and asked himself: “Do I really want the musical theater to go in this direction? Are we really giving up on original musicals?

​Riedel also reported that as much affection as there was for The Drowsy Chaperone, it still had its share of detractors. They complained that the show within the show was a weak parody of an old musical and that the score was thin. On Theater Talk's 2006 Tony predictions show, he even mentioned that The Drowsy Chaperone apparently didn't have a lot of support within the industry. In the end, Jersey Boys won 4 Tony Awards for Best Musical, Best Lead Actor in a Musical (John Lloyd Young), Best Featured Actor in a Musical (Christian Hoff), and Best Lighting Design of a Musical (Howell Binkley).​ Considering how split both shows were in receiving their share of the gold, I wouldn't be surprised if the final tally for Best Musical really was close.

Another one of the nominations for The Drowsy Chaperone I would like to talk about is Best Featured Actor in a Musical. This was the very first Tony nomination for Danny Burstein, who at that point, was already a Broadway vet. He had appeared in 8 productions with roles that ranged from being an understudy, a member of the ensemble, and having a small part. However, The Drowsy Chaperone marked his very first legit principal role on Broadway. To this day, I see comments from people saying that Danny should've won the Tony that year. Interestingly enough, no one was predicting him to win at all. Almost every expert was predicting Jim Dale to win for Roundabout Theatre Company's revival of The Threepenny Opera (even the New York Times' aforementioned survey suggested that he was the frontrunner). Despite that production receiving less than enthusiastic reviews from critics, Dale was a veteran actor who had previously won in 1980 for his performance as the title character in Barnum. He apparently also appeared to have been a consensus prediction given how he swept through the Outer Critics Circle and Drama Desk Awards that year. However, Melissa Rose Bernardo from Entertainment Weekly was the only expert who successfully predicted Christian Hoff would win for Jersey Boys​. So it seems that the position Danny Burstein was in that year was more of a 'welcome to the club' nomination as opposed to being an actual contender. Maybe he would've been more in the conversation back then if he had the overdue factor he has now with six nominations and no wins yet.
Proudly powered by Weebly
KARE REVIEWS