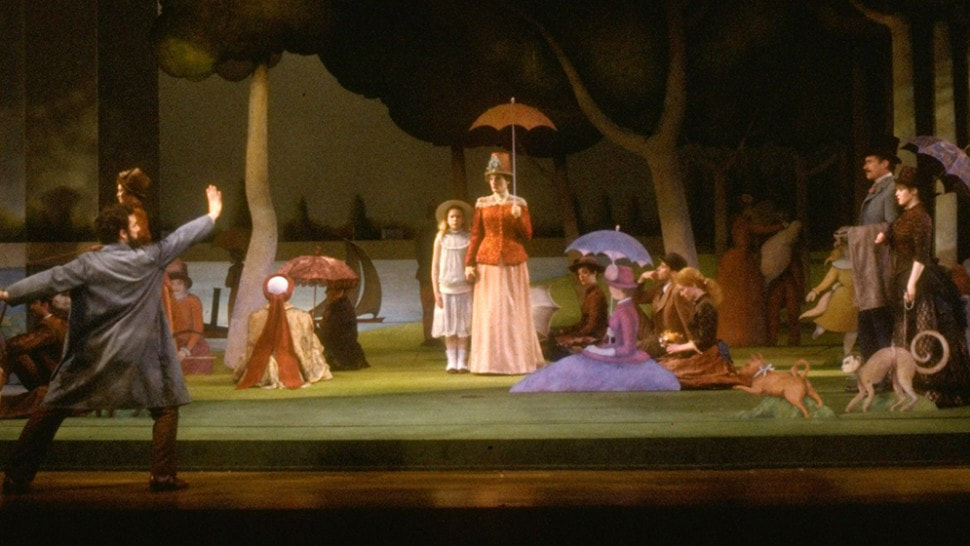 Welcome back to my 'And the Tony Almost Went to...' series, where I take a deep dive into a show that was the (likely) runner-up in the Best Musical race of any previous Tony Awards year. 35 years ago tonight marked the opening of a new Broadway musical by James Lapine and Stephen Sondheim. Today, we'll be looking back at this very show as well as its success at the Tonys.
Inspired by French pointillist painter Georges Seurat's painting A Sunday Afternoon on the Island of La Grande Jatte, this musical under the title of Sunday in the Park with George revolves around George, a fictionalized version of Seurat, who immerses himself deeply in painting his masterpiece. In the days leading up to the completion of his most famous painting, Georges Seurat is struggling to make meaningful art and maintaining a relationship with his lover, Dot. Amid the scorn of the artistic community, Seurat's artistic ability thrives while his love diminishes. A century later, Seurat's descendant (who is also an artist named George) finds himself burnt out and in search of what artistic path to follow, but he finds the answer to his future in the past.

After the critical and commercial failure of Merrily We Roll Along back in 1981 (it closed after 16 performances), Stephen Sondheim announced his intention to quit musical theatre. James Lapine later persuaded him to return to the theatrical world after the two of them were inspired by A Sunday Afternoon on the Island of La Grande Jatte. They spent several days at the Art Institute of Chicago studying the painting. Lapine noted that one major figure was missing from the canvas, which was the artist himself. This observation provided the springboard for the musical and the production evolved into a meditation on art, emotional connection and community.

​After having premiered Off-Broadway at Playwrights Horizon in July 1983, Sunday in the Park with George later opened on May 2nd, 1984 at the Booth Theatre on Broadway. The original cast included Mandy Patinkin as Georges Seurat/George, Bernadette Peters as Dot/Marie, Barbara Bryne as Old Lady/Blair Daniels, Judith Moore as Nurse/Harriet Pawling, Charles Kimbrough as Jules/Bob Greenberg, Dana Ivey as Yvonne/Naomi Eisen, Robert Westenberg as Soldier/Alex, Melanie Vaughan as Celeste #1/Waitress, Mary D’Arcy as Celeste #2/Elaine, and Brent Spiner as Franz/Dennis. In fact, three of the cast members from the Off-Broadway production who couldn't continue were Christine Baranski (Clarisse, who was later renamed Yvonne), Kelsey Grammer (Young Man on the Bank/Soldier), and Mary Elizabeth Mastrantonio (Celeste #2).

Yet, despite being considered a brilliant artistic achievement for everyone involved, the show could not overcome the more feel-good musical of that season which was...
Why Didn’t Sunday in the Park with George Win?: While the show has been beloved over the years, the original production opened to mixed reviews from critics. In his review for The New York Times, Frank Rich wrote "I do know...that Mr. Sondheim and Mr. Lapine have created an audacious, haunting and, in its own intensely personal way, touching work. Even when it fails – as it does on occasion – Sunday in the Park is setting the stage for even more sustained theatrical innovations yet to come." So it appears to me that the industry admired Sunday in the Park with George​ more than they actually liked it. Though with that being said, the show itself was still the odds-on favorite to win going into the 1984 Tony Awards

Meanwhile, La Cage aux Folles was a more traditional, feel-good musical that probably came at a time when New York really needed it. Back then, the two previous Best Musical winners (Nine and Cats) were these serious shows that were pushing the boundaries of musical theatre. So I guess voters at the time (especially older ones) felt ready to embrace a more traditional Broadway show. It's also worth noting that La Cage aux Folles was the first hit musical for composer/lyricist Jerry Herman since Mame back in 1966. Between those two shows, he had several flops such as 1969's Dear World, 1974's Mack & Mabel, and 1979's The Grand Tour.

In the end, La Cage aux Folles won 6 Tony Awards for Best Musical, Best Lead Actor in a Musical (George Hearn), Best Direction of a Musical (Arthur Laurents), Best Book of a Musical (Harvey Fierstein), Best Original Score (Jerry Herman), and Best Costume Design (Theoni V. Aldredge). In fact, when Jerry Herman won Best Original Score, he said in his acceptance speech that "This award forever shatters a myth about the musical theater. There's been a rumor around for a couple of years that the simple, hummable show tune was no longer welcome on Broadway. Well, it's alive and well at the Palace". Some perceived that remark as criticism of Sondheim's pointillistic score. Though Herman has since denied that that was his intention.

While the original production of Sunday in the Park with George did end up losing a lot of money after closing on October 13th, 1985, the show itself has since become much more beloved among the musical theatre world over the years (and is one of nine musicals to have won the Pulitzer Prize for Drama). More people have discovered it through the PBS broadcast, it's been produced by many regional theatres, and ​even spawned two Broadway revivals. The most recent of which took place two years ago, and was actually a commercial success (likely thanks to the fact that Jake Gyllenhaal was starring in a musical for a strictly limited run).
Proudly powered by Weebly
KARE REVIEWS