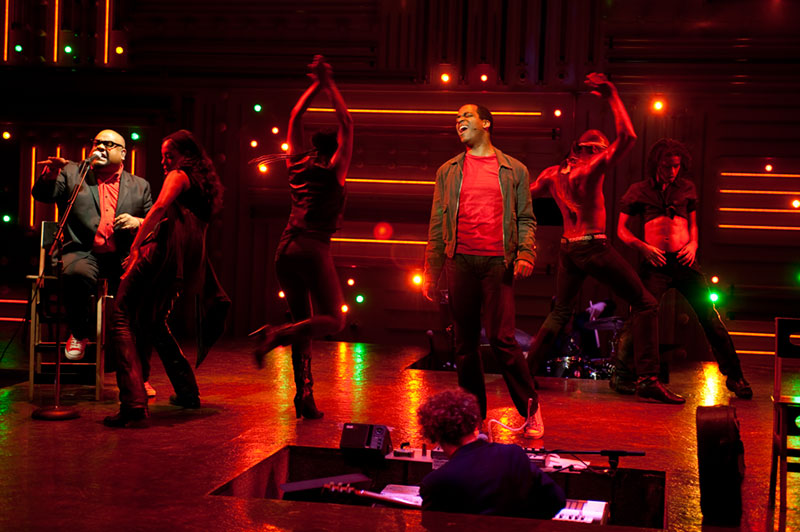 Welcome back to my 'And the Tony Almost Went to...' series, where I take a deep dive into a show that was the (likely) runner-up in the Best Musical race of any previous Tony Awards year. Tonight marks the opening of a new Broadway musical based on Ned Vizzini's 2004 novel titled Be More Chill. The show also marks the first Broadway directing credit for Stephen Brackett, who had previously worked on the boards as an assistant. Today, we'll be looking back at his last Broadway credit (where he served as assistant director) as well as that show's success at the Tonys.
Passing Strange is an original musical about a young African American's artistic journey of self-discovery in Europe, with strong elements of philosophical existentialism, metafiction (especially self-referential humor), and the artistic journey. Stew had never written a play nor musical before Passing Strange. In an interview with Berkeley Rep where the musical had its world premiered, he said he was initially inspired by reading about the Old Globe Theatre, where Shakespeare productions were originally performed in front of rowdy audiences. A longtime rock musician and performer, he wanted to combine the energy of a rock show with the lively potential of a theater setting.

Yet, despite being hailed as the most inventive new musical of the season, it could not overcome the hit that was...
Why Didn’t Passing Strange Win?: New York Post columnist Michael Riedel reported that Passing Strange was a hit with the critics and was very popular with industry insiders. Yet, the show struggled to find an audience as its producers, the Shuberts, were never able to hit on the right marketing campaign. As we've seen in the past, Tony voters don’t like to waste any major awards on a production that's been struggling. Though with that being said, Passing Strange still appeared to be an underdog during the season that year. Riedel also reported that some voters felt that In the Heights was going to win Best Musical, but they were voting for Passing Strange.

Meanwhile, In the Heights was a completely original musical that was more easily able to catch on with the public. Not to mention that in 2008, America was going through George W. Bush's final year in office and a presidential election. Therefore, I wouldn't be surprised if the Tony voters who championed In the Heights responded to it more for being a fresh, contemporary musical with themes of home, community, and family. In the end, the show won 4 awards for Best Musical, Best Original Score (Lin-Manuel Miranda), Best Choreography (Andy Blankenbuehler), and Best Orchestrations (Alex Lacamoire & Bill Sherman).

Just a month after the Tonys, Passing Strange ended up closing at a $5,000,000 loss on July 20th. Though filmmaker Spike Lee shot the last three performances, making a permanent record of the Broadway production "for generations and generations to see". The taping debuted at the 2009 Sundance Film Festival, and is now available on DVD and iTunes. As for In the Heights, that show put launched the career of Lin-Manuel Miranda, recouped its investment, ran for almost three years, and is now getting ready to make its way to the big screen.
Proudly powered by Weebly
KARE REVIEWS