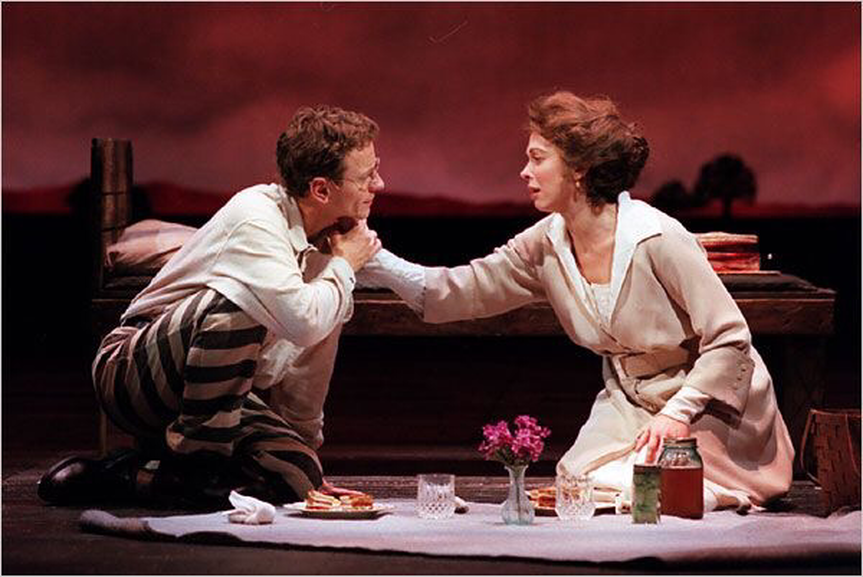 Welcome back to my 'And the Tony Almost Went to...' series, where I take a deep dive into a show that was the (likely) runner-up in the Best Musical race of any previous Tony Awards year. 20 years ago tonight marked the opening of a new Broadway musical with a book by Pulitzer Prize winner Alfred Uhry, a score by a then-up and coming composer/lyricist Jason Robert Brown, and was directed by the legendary Hal Prince. Today, we'll be looking back at this very show as well as its success at the Tonys.
Parade tells the true story of Leo Frank, a Brooklyn-raised Jew living in Georgia, who in 1913 is put on trial for the murder of thirteen-year-old Mary Phagan, a factory worker under his employ. Already guilty in the eyes of everyone around him, a sensationalist publisher and a janitor's false testimony seal Leo's fate. His only defenders are a governor with a conscience and, eventually, his assimilated Southern wife who finds the strength and love to become his greatest champion.

​Alfred Uhry, who grew up in Atlanta, had personal knowledge of the Leo Frank story as his great-uncle owned the pencil factory that was runned by him. When Uhry took the idea of musicalizing it to Hal Prince, Stephen Sondheim originally signed on to write the score, but later dropped out to work on something else. As they were in need of someone to take over, Hal had already been aware of Jason Robert Brown through his daughter, Daisy. At the time, she had previously collaborated with Jason on a song cycle called Songs for a New World.
​
Parade opened on December 17th, 1998 at the Vivian Beaumont Theater in Lincoln Center on Broadway. The original cast included Brent Carver as Leo Frank, Carolee Carmello as Lucille Frank, Kirk McDonald as Frankie Epps, Christy Carlson Romano as Mary Phagan, Herndon Lackey as Hugh Dorsey, John Hickok as Governor John Slaton, Evan Pappas as Britt Craig, Rufus Bonds, Jr. as Jim Conley, Ray Aranha as Newt Lee, John Leslie Wolfe as Tom Watson, and Jessica Molasky as Mrs. Frances Phagan.

​Yet, despite being the most respected new musical of that season, something went wrong, and another show with respected pedigree took the crown.
Why Didn't Parade Win?: Going into the fall of 1998, there was a ton of excitement when Lincoln Center Theater announced that it was joining forces with the theater company Livent to produce this show. Yet, Parade struggled to find an audience, ultimately playing its final performance on February 28th, 1999. You have to go all the way back to 1968 when a closed show (in this case being Hallelujah, Baby!) won the Tony for Best Musical.

New York Post columnist Michael Riedel reported that Lincoln Center blamed the collapse on the bankruptcy of Livent. Without their money, nonprofit Lincoln Center said it could not promote, market, nor advertise the show properly. Though what really might've been the case was that audiences at the time weren't ready for a musical like Parade. They didn’t like its bleakness, its pompousness, its unrelenting self-importance, and, they didn’t even like Brown’s score, which they felt was long on moody music and short on memorable songs. Tuneless shows such as Parade pretty much became the norm back then, especially in the nonprofit theater world. There were composers coming up the ranks who, while accomplished and talented, actively resist melody. Rather than a collection of theater songs, their scores were a collage of angst-ridden art music, some of it pretty, but much of it utterly unmemorable – or, as with Parade, downright dreary. They were hugely popular with highbrow critics and win lots of grants and prizes, but they never seemed to catch on with the general public.

From 1997-2002, the first hour of the Tonys were televised on PBS. They would not only present all the design awards, but also both directing categories, book, score, choreography, and orchestrations. Then, viewers would switch over to CBS to watch the main ceremony with the acting and production awards presented as well as the performances. Therefore, Parade won both of its Tonys during the PBS hour. In fact, when Jason Robert Brown came into the press room after winning Best Original Score, Michael Riedel literally said to him that it wasn't a very competitive year and that he really just won out of default. Brown responded to that by saying "I've worked very hard for this, a lot of people have worked very hard for this, and a little blankety-blank blank like you isn't about to take it away from me."

Meanwhile, Fosse, a musical revue showcasing the iconic choreography of Bob Fosse, opened around the time Parade flopped, and became a hit. In those days, Tony voters pretty much voted with their wallets regardless of whether or not they thought the show itself was great. In any case, the industry respected Fosse as a great tribute to such a legendary director/choreographer. At the 1999 Tonys, the show won 3 awards for Best Musical, Best Orchestrations (Douglas Besterman & Ralph Burns), and Best Lighting Design (Andrew Bridge). Though in the years since, Parade has remained as the new musical of the 1998-99 Broadway season that is best remembered.
Proudly powered by Weebly
KARE REVIEWS