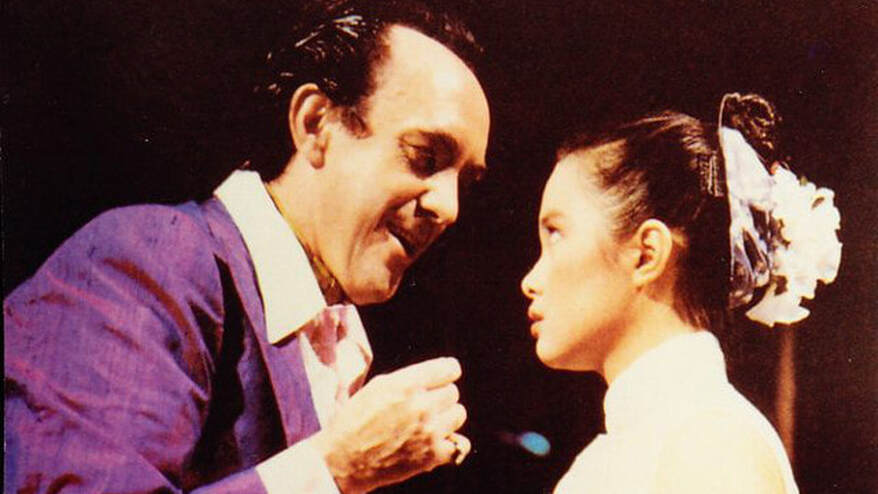 Welcome back to my 'And the Tony Almost Went to...' series, where I take a deep dive into a show that was the (likely) runner-up in the Best Musical race of any previous Tony Awards year. Tonight marks two-time Tony winner Jonathan Pryce's return to the New York stage in Manhattan Theatre Club's presentation of Florian Zeller's The Height of the Storm. Today, we'll be looking back at the show that marked Pryce's Broadway musical debut as well as its success at the Tonys.
Based on Giacomo Puccini's 1904 opera titled Madame Butterfly, the story begins in the dangerous days before the fall of the Saigon in 1975 during the Vietnam War. Kim, a seventeen-year-old peasant orphan, is hauled in by a French-Vietnamese hustler known as The Engineer at his bar and brothel. While working her first night as a prostitute, she meets and falls in love with an American G.I. named Christopher Scott. When the city falls, the lovers are forced apart, and must each find their own way, alone.

Miss Saigon was inspired by a photograph, which composer Claude-Michel Schönberg found inadvertently in a magazine. It showed a Vietnamese mother leaving her child at a departure gate at Tan Son Nhut Air Base to board an airplane headed for the United States where the child's father, an ex-GI, would be in a position to provide a much better life for the child. Schönberg considered this mother's actions for her child to be "The Ultimate Sacrifice," an idea that was central to the plot of the musical.​

After having premiered in London's West End in September of 1989, Miss Saigon opened on April 11th, 1991 at The Broadway Theatre on Broadway. The original cast included Lea Salonga as Kim, Jonathan Pryce as The Engineer, Willy Falk as Christopher Scott, Hinton Battle as John Thomas, Liz Callaway as Ellen, and Barry K. Bernal as Thuy. In fact, someone who made his Broadway debut in the ensemble was a young black performer named W. Ellis Porter. Since then, he's become known as Billy Porter, and has in recent years won a Tony and a Grammy as an original cast member of Kinky Boots, and even more recently won an Emmy for his role on the FX series, Pose.

​Yet, despite becoming the biggest hit of the 1990-91 Broadway season, it could not overcome the late-breaking underdog that was...
Why Didn't Miss Saigon Win?: According to The New York Times, "Will Rogers and Miss Saigon had both earned 11 nominations and were considered the front-runners for the Tony as Best Musical. But many theatre people predicted that Miss Saigon, an import from London, would be the victim of a backlash. There is lingering bitterness against both the huge amount of publicity Miss Saigon has received and the battle by its producer, Cameron Mackintosh, to permit its two foreign stars, Mr. Pryce... and the Filipina actress Lea Salonga, to re-create on Broadway their number one award-winning roles." To provide further context, there was a ton of controversy over Jonathan Pryce being a white British actor playing a Eurasian. The Actors' Equity Association refused to allow Pryce to reprise his role of The Engineer on Broadway. Executive secretary Alan Eisenberg said "The casting of a Caucasian actor made up to appear Asian is an affront to the Asian community. The casting choice is especially disturbing when the casting of an Asian actor, in the role, would be an important and significant opportunity to break the usual pattern of casting Asians in minor roles." Producer Cameron Mackintosh threatened to cancel the production, despite massive advance ticket sales.

​It's also worth noting that while Miss Saigon did become a big hit that ran for nearly 10 years on Broadway, it did not receive instant acclaim from critics. The show has received criticism over the years for what some have perceived as its racist or sexist overtones, including protests regarding its portrayal of Asians and women in general. This loss also might've been a sign of how much the industry was starting to move on from awarding the big, epic musicals from London. After all, four of the previous Best Musical winners from the 1980s - Evita, Cats, Les Misérables (another Boublil & Schönberg work), and The Phantom of the Opera - pretty much fit into that mold 100%. So it was during the 1990s that Tony voters started championing American musicals much more. After all, musicals are very much an American art form. While one British musical, Sunset Boulevard, did win in 1995, that was a very weak season on Broadway where only one other new musical, Smokey Joe's Cafe, even opened.

As for The Will Rogers Follies​ winning, history pretty much repeated itself from 1982 where Tommy Tune came in at the last minute with a show (Nine) he directed, and stole all of the thunder away from the presumed frontrunner (Dreamgirls) in the end. Speaking of which, there also probably was an I.O.U. to Tommy Tune given that despite winning for both directing and choreographing the year before for Grand Hotel, that show lost Best Musical to City of Angels​. Not to mention that out of all the nominees back in 1991, The Will Rogers Follies was probably the show that appealed most to older Tony voters at the time. It focused on the life and career of famed humorist and performer Will Rogers, using the Ziegfeld Follies as a backdrop, which he often headlined, and described every episode in his life in the form of a big production number. In other words, the show itself was much more in the vein of a traditional Broadway musical unlike Miss Saigon, Once on This Island, and The Secret Garden. In the end, The Will Rogers Follies won 6 Tony Awards for Best Musical, Best Direction of a Musical (Tommy Tune), Best Original Score (Cy Coleman, Betty Comden, & Adolph Green), Best Choreography (Tommy Tune), Best Lighting Design (Jules Fisher), and Best Costume Design (Willa Kim).
Proudly powered by Weebly
KARE REVIEWS