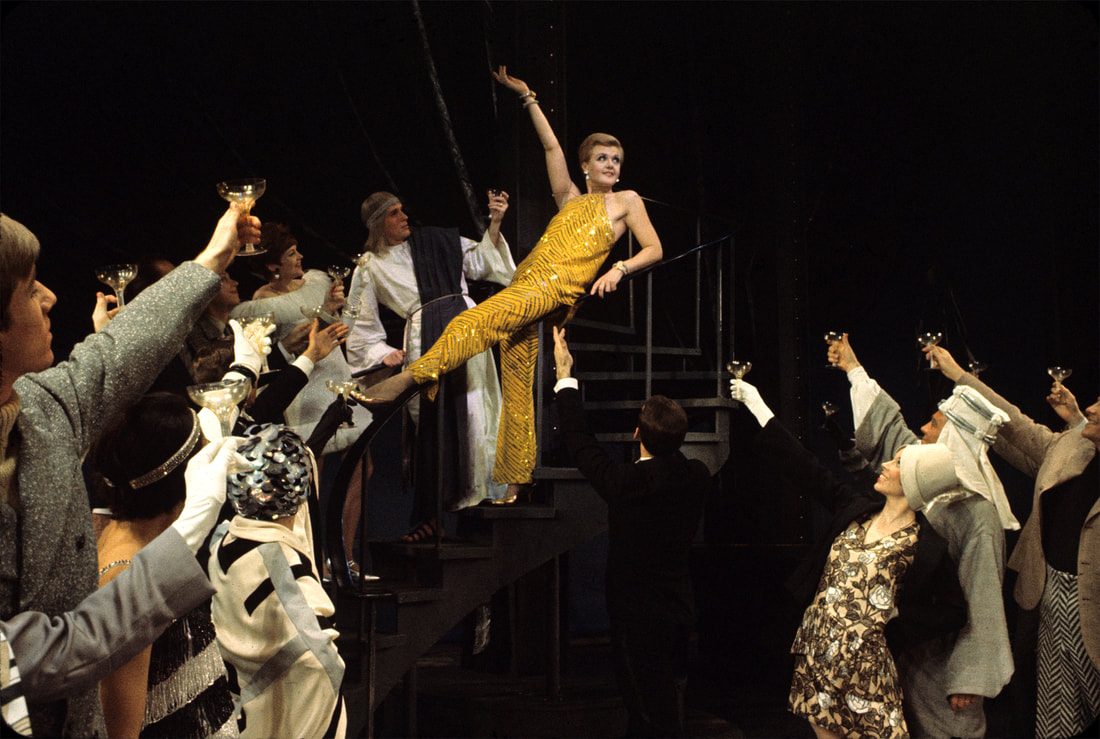 Welcome back to my 'And the Tony Almost Went to...' series, where I take a deep dive into a show that was the (likely) runner-up in the Best Musical race of any previous Tony Awards year. 55 years ago tonight marked the opening of a new Broadway musical by Jerome Lawrence, Robert E. Lee, and Jerry Herman. Today, we'll be looking back at this very show as well as its success at the Tonys.
Based on Jerome Lawrence & Robert E. Lee's 1956 stage play, Auntie Mame, as well as Edward Everett Tanner III (under the pseudonym of Patrick Dennis)'s 1955 novel of that same title, Mame is set in New York City over the course of many years from the Great Depression to World War II. The story begins when wealthy, eccentric socialite Mame Dennis suddenly becomes the legal guardian of her nephew, Patrick Dennis, following the death of her brother. Mame ends up embracing the challenge as she introduces Patrick to all of life's wonders through a series of adventures.

The stage adaptation of Auntie Mame originally opened on October 31st, 1956 at the Broadhurst Theatre on Broadway with Rosalind Russell starring as the title character. A little over two years later, a feature film adaptation with Russell reprising her role was released in movie theaters nationwide, which ended up getting nominated for 6 Academy Awards (including Best Picture). The overall success of the play made everyone involved with it immediately think of the idea of doing a musical adaptation. Unlike the nonmusical film which had a screenplay penned by Betty Comden & Adolph Green, Jerome Lawrence & Robert E. Lee wrote the book for the musical themselves, adapting it from their play, with Jerry Herman writing the score.

Yet, despite becoming a hit, it wasn't the only one of those in town to have debuted during the 1965-66 Broadway season.
Why Didn't Mame Win?: Two years after achieving such an enormous success with Hello, Dolly!, it seemed that people went into composer/lyricist Jerry Herman’s next musical with very high expectations. Which is pretty much bound to happen anytime an artist comes back with a new project coming off the heels of their previous work that was considered to be very highly successful as well as inevitable comparisons. Like Hello, Dolly!, Mame featured larger-than-life title characters who subscribed to lives of love, adventure, and embracing the human experience with an untethered zest. Jerry Herman's scores for both shows were similar, brassy and bold, as well as occasionally quaint, with numbers that celebrated their respective title characters, building toward show-stopping climaxes. The similarities between the two might've been what kept Mame from winning the Tony for Best Musical. As delightful as that show was considered to be, people may have also found it to be a formulaic, rehash of Hello, Dolly!. Though nonetheless, Mame was seen as a joyous show, a feel-good evening of melody, wit, and unforgettable characters, all performed with musical comedy brilliance by the likes of Angela Lansbury and Bea Arthur.​

Meanwhile, Man of La Mancha was at the time utilizing some unconventional musical theatre storytelling. It was a story within a story that looked at our societal ills through the lens of the Spanish Inquisition. The knight errant Don Quixote, with an inherent altruistic code, finds only beauty and honor in a world that was bleak and unkind. Man of La Mancha not only felt fresh and experimental, but it was also above all inspirational. It dared audiences to find the best in the world, despite living in a decade that was being experienced in turmoil. The score by Mitch Leigh & Joe Darion felt painted in poetic strokes, with the standout hit, 'The Impossible Dream', not only becoming one of Broadway’s most beloved showtunes, but it also went on to become a standard that has been covered by countless vocalists. Book writer Dale Wasserman was credited for doing an expert job at boiling down Miguel de Cervantes’ epic novel, Don Quixote, into a two-hour musical with no intermission, while also maintaining the spirit of the source material. Albert Marre was credited for directing the original production with touches that were seen as clever and sometimes majestic, that lifted the show from being a mechanical repetition staging of a classic novel and transformed it into something that was uniquely its own. Though at the center of it all, many felt Richard Kiley played Don Quixote with a gravitas and sincerity that truly endeared audiences to the character. Man of La Mancha ended up winning 5 Tony Awards for Best Musical, Best Lead Actor in a Musical (Richard Kiley), Best Direction of a Musical (Albert Marre), Best Original Score (Mitch Leigh & Joe Darion), and Best Scenic Design (Howard Bay).

Though what is interesting is that both shows went on to receive film adaptations in the 1970s that went through such troubled productions, and ended up flopping all around. With Man of La Mancha, Albert Marre was originally set to direct that movie at United Artists. He even screen tested both of the original stars of the stage musical, Richard Kiley and Joan Diener, in anticipation of both of them reprising their roles. Yet due to Marre’s inexperience with filmmaking, he used up part of the movie’s budget on screen tests, which angered executives at the studio. He ended up getting fired because of that. As a result, Kiley and Diener both left the project as well. Then Peter Glenville, the Oscar nominated director behind 1964's Becket, took over, and cast his friend, Peter O'Toole, in the starring role of Don Quixote. Yet Glenville was fired after his decision to eliminate most of the songs, approaching the film as a nonmusical, was vetoed by United Artists. The studio eventually settled on Arthur Hiller, the Oscar nominated director behind 1970's Love Story, to be at the helm of the movie. Although Peter O'Toole was very excited about the vision Peter Glenville had for the project, and was not happy about him getting fired. Not to mention that O'Toole and Hiller both did not get along at all during production, with the legendary actor often calling the director "Little Arthur". The film adaptation of Man of La Mancha was eventually released in movie theaters in 1972, and only grossed over $11,500,000 at the worldwide box office on a budget of $12,000,000. Not only that, but it also received some overwhelmingly negative critical reviews at the time. Book writer Dale Wasserman admitted in an interview shortly before his death in 2008 that he strongly disliked the movie, calling it "exaggerated" and "phony".

With Mame, Lucille Ball put up $5,000,000 to finance its film adaptation at Warner Brothers on the agreement that she would star as the title character. Yet Jerry Herman went to the executives at the studio, begging them to reconsider and even explained why Ball was wrong for the part. Nonetheless, they went ahead and made the movie with her anyway. Originally, principal photography was set to begin in early 1972 with George Cukor, who won an Oscar for directing the 1964 film adaptation of My Fair Lady, at the helm. But shooting got delayed for nearly a year due to Lucille Ball breaking her leg in a skiing accident, which then forced Cukor to withdraw from the project while Gene Saks, who directed the original Broadway production, ended up taking over. Madeline Kahn was originally cast as Agnes Gooch, but was replaced right after filming began. She was later told that when she reported for work on the set, Lucille Ball took one look at her, realized that Kahn's curvaceous body could never be made to look like the frumpy, somewhat shapeless character she was suppose to be playing, and had her fired. Although some sources claim that Kahn got herself fired on purpose so she could star in Blazing Saddles for Mel Brooks, and still get paid, which by her contract wouldn't have happened if she had only quit. So Jane Connell, who originated the role of Agnes Gooch on Broadway, took over. The film adaptation of Mame was released in movie theaters nationwide on March 27th, 1974, and the end results turned out to be very disastrous. For one, it only grossed over $6,500,000 at the worldwide box office on a budget of $12,000,000. Not only that, but it was also a critical embarrassment with most of the criticisms aimed at Lucille Ball’s performance, feeling that she was not up to the musical demands of the character (nor was she even right for the role from an acting standpoint either). She was so hurt by the film’s response, that she vowed to never make a movie again. Ball also admitted that making Mame "was about as much fun as watching your house burn down" as she apparently found the costumes uncomfortable, and the hats and wigs induced headaches on her. Jerry Herman disliked the film so much that he never allowed to have movie adaptations of his musicals to ever be made again without his direct involvement nor approval. Angela Lansbury later admitted in an interview with The Wall Street Journal that she never forgave Warner Brothers for passing her over.