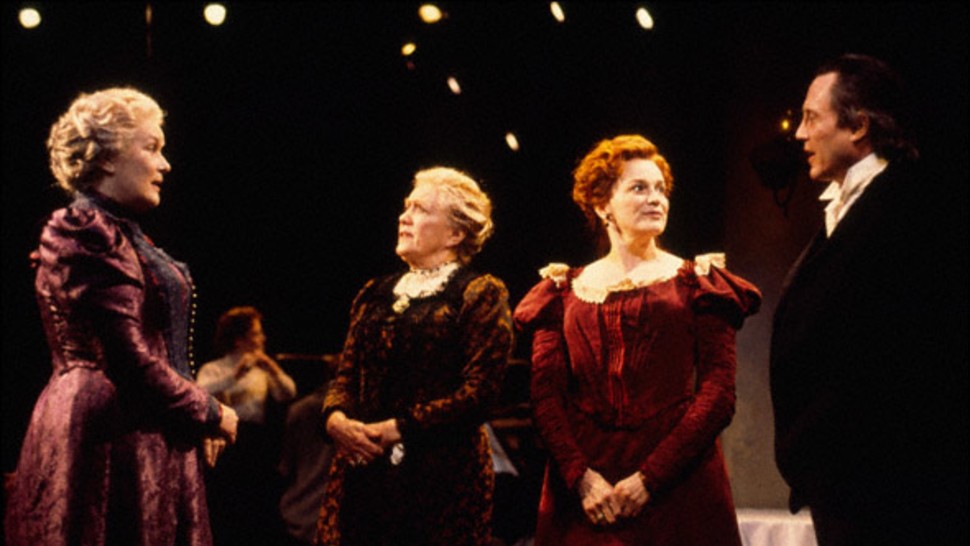 Welcome back to my 'And the Tony Almost Went to...' series, where I take a deep dive into a show that was the (likely) runner-up in the Best Musical race of any previous Tony Awards year. Whether any of you may or may not have already heard, all of Broadway has been shutdown until further notice due to the coronavirus pandemic. As a result, this year's Tony Awards have been postponed indefinitely. While it's probably gonna be a long wait until this pandemic clears up, something I am planning to keep everyone occupied in the meantime is more features in this series. Today, we'll be talking about the year 2000.
Based on James Joyce's 1914 short story titled The Dead​, this musical tells the story of a husband and wife who find an emotional gulf between them while attending an annual Christmas party at Aunt Julia and Aunt Kate's home in Ireland in the early 20th century. A husband and wife's emotional distance from each other is exposed at an Irish Christmas party, when the wife becomes haunted by memories of a dead lover
​
After a successful run Off-Broadway at Playwrights Horizons, James Joyce's The Dead opened on January 11th, 2000 at the Belasco Theatre on Broadway. The original cast included Blair Brown as Gretta Conroy, Paddy Croft as Mrs. Malins, Brian Davies as Mr. Browne, Daisy Eagan as Rita, Dashiell Eaves as Michael, Sally Ann Howes as Aunt Julia Morkan, John Kelly as Bartell D'Arcy, Brooke Sunny Moriber as Lily, Marni Nixon as Aunt Kate Morkan, Alice Ripley as Miss Molly Ivors, Emily Skinner as Mary Jane Morkan, Stephen Spinella as Freddy Malins, and Christopher Walken as Gabriel Conroy.

​Yet, despite strong critical reviews and good word-of-mouth, something went wrong, and a completely different kind of musical ended up taking the gold.
Why Didn't James Joyce's The Dead Win?: The show sadly ended up closing prematurely on April 16th, 2000 after a run of 120 performances. Weekly grosses ended up going down in the last few weeks as did advance ticket sales. Arielle Tepper, who was a 27-year-old producer on the production, said it did not make financial sense to keep James Joyce’s The Dead open in the hopes of snagging Tony Award nominations the following month. She told the New York Post “I didn’t want to play that kind of game. I produced the show because it is beautiful and moving, not because I thought it would win lots of awards.” James Joyce’s The Dead only ended up returning only a tiny portion of its $1.1 million start-up cost. You have to go all the way back to 1968 when a closed show (in this case being Hallelujah, Baby!) won the Tony for Best Musical.

When columnist Michael Riedel surveyed Tony voters for the New York Post that year, he reported that Contact was the clear winner despite industry carping that it was not a musical in the traditional sense because it had pre-recorded songs and very little dialogue. Though what was trumping such concerns was the palpable lack of enthusiasm for the other nominees (James Joyce’s The Dead, Swing!, and The Wild Party). The sniping at Contact was apparently short-sighted. Did Broadway really want to stifle creativity with antiquated notions and silly rules governing the definition of a musical? In the end, Contact won 4 Tony Awards for Best Musical, Best Featured Actor in a Musical (Boyd Gaines), Best Featured Actress in a Musical (Karen Ziemba), and Best Choreography (Susan Stroman).

However, since Contact was just a dance play with pre-recorded music and minimal dialogue, there was a bit of controversy over it winning Best Musical. There were a ton of arguments about what actually constitutes a musical, which led to the American Theatre Wing creating a new Tony Award for Best Special Theatrical Event that was given off and on from 2001-2009.
Proudly powered by Weebly
KARE REVIEWS