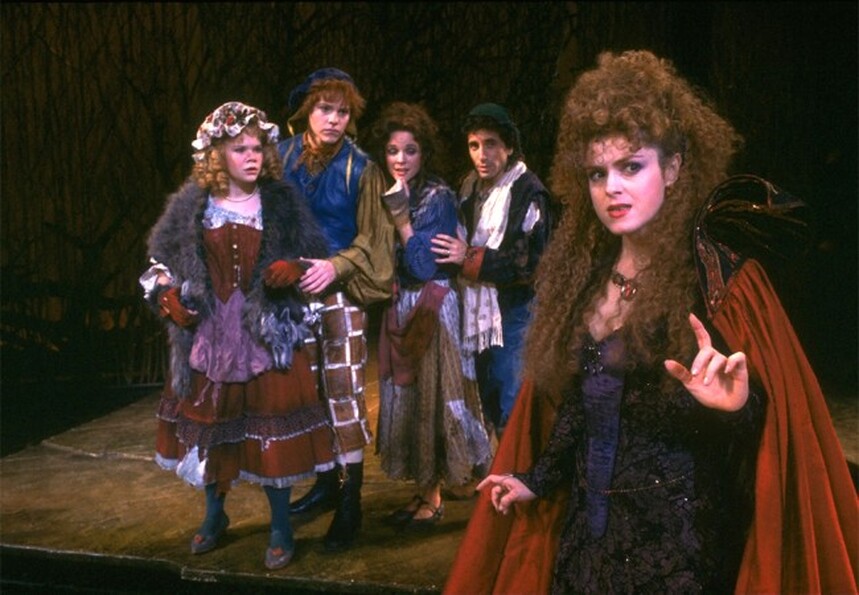 Welcome back to my 'And the Tony Almost Went to...' series, where I take a deep dive into a show that was the (likely) runner-up in the Best Musical race of any previous Tony Awards year. Today marks the 90th birthday for the legendary composer/lyricist, Stephen Sondheim. Over the years, he has written so many genius scores for some of the great works in the American musical theatre canon such as A Funny Thing Happened on the Way to the Forum, Company, Follies, A Little Night Music, Sweeney Todd, Sunday in the Park with George, and more. Today, we'll be looking back at another popular Sondheim work as well as its success at the Tonys.
Into the Woods intertwines the plots of several fairy tales by the Brothers Grimm and Charles Perrault exploring the consequences of the characters' wishes and quests. The main storyline focuses on a childless baker and his wife as they go into the woods to break a spell set upon them by a witch. There they run into various classic fairy tale characters, all before experiencing what happens after 'happily ever after'.

The idea for this musical actually began with Stephen Sondheim's interest in computer games. He wanted to do something like Dungeons & Dragons, but director/playwright James Lapine, who had just worked with Steve on Sunday in the Park with George, wasn't interested in any of that. Though something that James was interested in was fairy tales, so he began writing a completely original story about a baker and his wife. As James went further along in the process, he discovered that fairy tales are very short because of hard it can be to stretch them out over two and a half hours. So he decided to include several pre-existing fairy tale characters in the story while the original characters of the baker and his wife were front and center.

After having its world premiere at the Old Globe Theatre in San Diego, California about a year prior, Into the Woods opened on November 5th, 1987 at the Martin Beck (now Al Hirschfeld) Theatre on Broadway. The original cast included Chip Zien as The Baker, Joanna Gleason as The Baker’s Wife, Bernadette Peters as The Witch, Tom Aldredge as The Narrator/Mysterious Man, Kim Crosby as Cinderella, Robert Westenberg as Cinderella’s Prince/Wolf, Ben Wright as Jack, Danielle Ferland as Little Red Ridinghood, Pamela Winslow as Rapunzel, Chuck Wagner as Rapunzel's Prince, Barbara Bryne as Jack’s Mother, Philip Hoffman (Not to be confused with Philip Seymour Hoffman) as The Steward, Joy Franz as Cinderella’s Stepmother, Edmund Lyndeck as Cinderella’s Father, Lauren Mitchell as Lucinda, Kay McClelland as Florinda, and Merle Louise as Cinderella’s Mother/Granny/The Giant.

*denotes an award it won.
​
​Yet, Into the Woods suffered from opening in the exact same season as a little known musical called...
Why Didn't Into the Woods Win?: This was during the era of when Broadway was experiencing its own British invasion. Throughout the 1980s, the big, British imports dominated the Tonys with Evita winning Best Musical in 1980, The Life and Adventures of Nicholas Nickleby winning Best Play in 1982, Cats winning Best Musical in 1983, and Les Misérables winning Best Musical in 1987. Not to mention that The Phantom of the Opera was not only THE smash hit of the 1987-88 season, but it was also one of the very few Broadway productions at the time to have earned a place in pop culture. Leave it to Andrew Lloyd Webber for helping musical theater stay in the mainstream.

​When Phantom opened in January, it had a $19,000,000 advance in ticket sales, and had been selling out ever since. Frank Rich wrote in his review for the New York Times that "It may be possible to have a terrible time at The Phantom of the Opera, but you'll have to work at it. Only a terminal prig would let the avalanche of pre-opening publicity poison his enjoyment of this show, which usually wants nothing more than to shower the audience with fantasy and fun, and which often succeeds, at any price." At the 1988 ceremony, The Phantom of the Opera won 7 Tony Awards for Best Musical, Best Lead Actor in a Musical (Michael Crawford), Best Featured Actress in a Musical (Judy Kaye), Best Direction of a Musical (Harold Prince), Best Lighting Design (Andrew Bridge), Best Scenic Design (Maria Björnson), and Best Costume Design (Maria Björnson). Yet, Into the Woods was able to beat Phantom for Book and Score. How did that happen?

As many fans there are of The Phantom of the Opera, there are also some detractors who feel that the show isn't as well written as it is performed. They feel that the creative success of it all lies more in Hal Prince's staging as opposed to the material by Andrew Lloyd Webber (book/music), Charles Hart (lyrics), and Richard Stilgoe (book/additional lyrics). I must admit that when I saw the national tour of The Phantom of the Opera in 2018, it was a revamped staging directed by Laurence Connor. Despite some strong performances from the cast and orchestra, the production might've made the problems with the material all the more noticeable. Whereas with Into the Woods, many people believe that from a writing standpoint, it is far superior to Phantom in every single way.

​It is interesting how both Into the Woods and The Phantom of the Opera have been able to endure in the years since. Phantom is still running to this day, making it the longest-running show in Broadway history. There's also multiple productions playing all over the world (including London, where it originated). Though the musical has spawned a 2004 Academy Award nominated film adaptation directed by Joel Schumacher that was a modest hit at the box office, but also a bit of a critical flop, and a problematic stage sequel titled Love Never Dies, which had a troubled debut in London, but has since been reworked. Meanwhile, Into the Woods has lived on through its PBS broadcast, and is still frequently performed by high schools, community, and regional theatres all over the world. Not to mention that it has spawned a 2014 Academy Award nominated film adaptation directed by Rob Marshall that was a success at the box office and received a very favorable critical response. As for where I stand on this race...

I'll say that in defense of both shows, Into the Woods is indeed the more accomplished piece of theatre while Phantom (under the direction of Hal Prince) can be magnificent to behold.
Proudly powered by Weebly
KARE REVIEWS