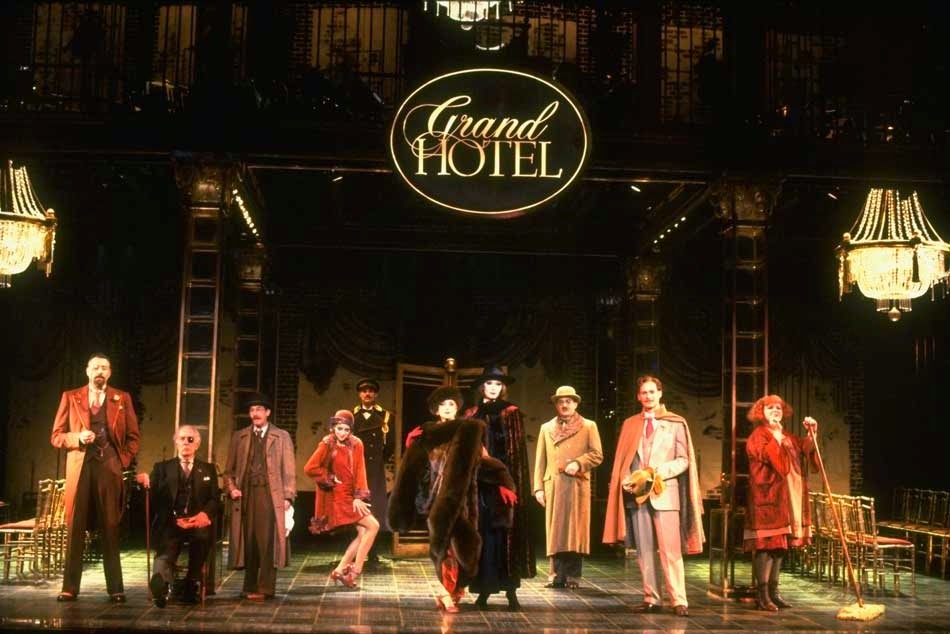 Welcome back to my 'And the Tony Almost Went to...' series, where I take a deep dive into a show that was the (likely) runner-up in the Best Musical race of any previous Tony Awards year. 30 years ago tonight marked the opening of a new Broadway musical directed & choreographed by the legendary Tommy Tune. Today, we'll be looking back at this very show as well as its success at the Tonys.
Based on Vicki Baum's 1929 novel and stage play titled Menschen im Hotel (which in english means People in a Hotel) as well as the subsequent 1932 Academy Award-winning feature film adaptation from MGM, Grand Hotel focuses on events taking place over the course of a weekend in an elegant hotel in 1928 Berlin and the intersecting stories of its eccentric guests. The guests include a fading prima ballerina; a fatally ill Jewish bookkeeper, who wants to spend his final days living in luxury; a young, handsome, but destitute Baron; a cynical doctor; an honest businessman gone bad, and a typist dreaming of Hollywood success.

Book writer Luther Davis along with the songwriting team of Robert Wright and George Forrest first adapted Baum's story in 1958 under the title of At the Grand. That version changed the setting from 1928 Berlin to contemporary Rome and transformed the ballerina into an opera singer closely resembling Maria Callas to accommodate actress Joan Diener, who was scheduled to star under the direction of her husband, Albert Marre. All of them had collaborated on the earlier musical Kismet and anticipated another success, but Davis' book strayed too far from the story that was familiar to fans of the film. When Paul Muni agreed to portray Kringelein, the role was changed and expanded, with the character becoming a lowly hotel employee whose stay in a hotel suite is kept secret from the management. Other changes included Flaemmchen became a dancing soubrette, Preysing and his dramatic story line were eliminated completely, and two deported American gangsters were added for comic relief. At the Grand opened to mixed reviews and good business in Los Angeles and San Francisco, but when it became apparent to the creators that Muni was ill and would not be able to sustain a Broadway run, producer Edwin Lester decided to cancel the Broadway opening scheduled for September 25th, 1958, and everyone moved on to other projects.

Three decades later, Davis, Wright, and Forrest decided to dust off their original material and give the show another try, returning the story to its original setting in 1928 Berlin. This time, it was placed in the hands of director/choreographer Tommy Tune, who envisioned it as a two-hour, non-stop production comprising dialogue scenes, musical numbers, and dance routines overlapping and at times competing with each other, thereby capturing the mood of a bustling hotel where something is happening at all times. Seven songs from At the Grand were incorporated into what was now called Grand Hotel, although two were dropped during the out-of-town tryout in Boston. Tommy Tune even recruited book writer Peter Stone (whom he had worked with on My One and Only) to do some uncredited rewrites to the script and composer/lyricist Maury Yeston (whom he had worked with on Nine) to write six new songs and additional lyrics for others.

​Yet, despite receiving the most nominations of any show that year, it could not overcome the underdog that was...
Why Didn't Grand Hotel Win?: It appears to me that City of Angels was kind of the underdog of that season. The show itself was a new musical without big stars that was only taking in about $18,000 a day during previews. Yet, when City of Angels opened to mixed reviews from critics, Frank Rich of the New York Times gave it some very glowing praise which led to $324,700 that was made at the box office a day later. Meanwhile, Grand Hotel was seen more as an achievement for its stage craft, but not as much for its writing.