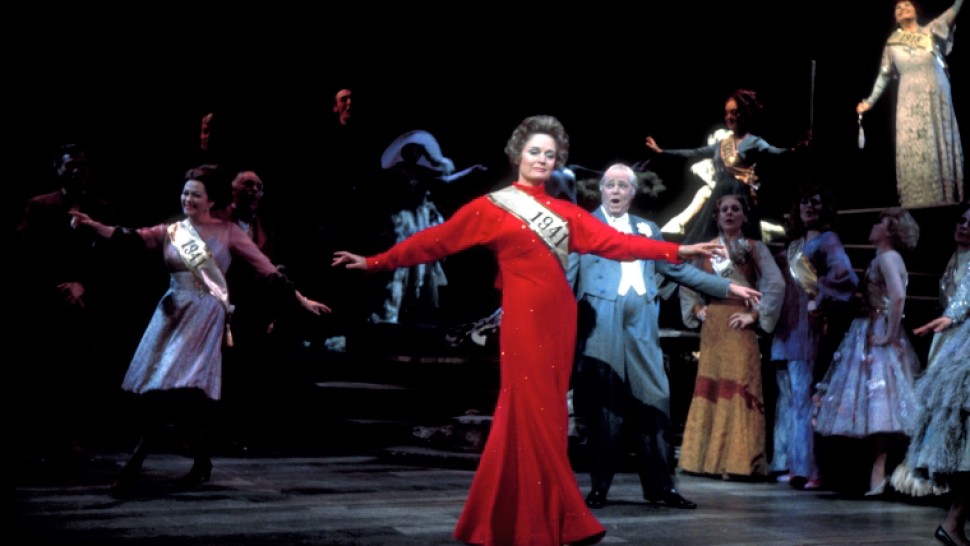 Welcome back to my 'And the Tony Almost Went to...' series, where I take a deep dive into a show that was the (likely) runner-up in the Best Musical race of any previous Tony Awards year. 50 years ago tonight marked the opening of a new Broadway musical by James Goldman and Stephen Sondheim with a production that was directed by Hal Prince (who also produced) and Michael Bennett (who also choreographed). Today, we'll be looking back at this very show as well as its success at the Tonys.
Follies is an original musical set in a crumbling Broadway theatre in 1971 that is scheduled for demolition. Theatrical impresario Dimitri Weissmann hosts a reunion with past performers of his musical revue titled Weismann's Follies, which played in that theatre between World War I and World War II. The story focuses on two middle-aged couples who are attending the reunion, Buddy & Sally Durant Plummer and Benjamin & Phyllis Rogers Stone. Although both couples are deeply unhappy with their marriages. Buddy, a traveling salesman, is having an affair with a girl on the road; Sally is still as much in love with Ben as she was from years prior; and Ben is so self-absorbed that Phyllis feels emotionally abandoned. Several of the former showgirls (which includes Sally and Phyllis) perform their old numbers, sometimes accompanied by the ghosts of their former selves.

Following the commercial failure of his collaboration with composer Richard Rodgers on the 1965 musical, Do I Hear a Waltz?, Stephen Sondheim decided from that moment on to start working on projects where he could write both music and lyrics himself. One of his first projects since then was a new musical he had asked playwright James Goldman to work with him on. When they both read an article from the New York Times about a gathering of former showgirls from the Ziegfeld Follies, the two of them decided to settle on that as the subject for their show.

​Yet despite winning the most accolades of the night, along came a completely different musical that won the biggest award of them all.
Why Didn't Follies Win?: According to Peter Filichia's book, Strippers, Showgirls, and Sharks, it seemed that many Tony voters at the time weren't ever sure of what they saw during the long intermissionless show. Some had trouble catching on to one of the musical's most dazzling concepts where most of the characters who were attending the reunion were followed by younger versions of themselves. To make a long story short, Tony voters were either left confused by Follies when it first premiered or felt that the story was too cathartic for them.

​Unlike the previous Sondheim and Prince collaboration at the time, Company, that show at least had its main protagonist somewhat optimistic about becoming a husband (likely due to him having never been married before). Although when the 1972 Tony Awards took place, Company had already ended its Broadway run about three months beforehand. Despite winning Best Musical the previous year, the show never necessarily became a big hit at the box office. So there probably was a feeling among voters at the time that if audiences weren't crazy about Company, then they'd likely respond even less to Follies. Not to mention that the latter show at that point had been running for over a year and was losing momentum at the box office. We’ve seen in the past how Tony voters don’t usually like to waste any major awards on a production that’s been struggling. With Follies being as polarizing as it was at the time, there was no point for the industry to give it Best Musical and encourage ticket buyers to see something that they likely weren't going to get.

With Two Gentlemen of Verona, that was a rock musical adaptation of William Shakespeare's comedy of the same name. So it seemed like something that was not as complex as Follies, which likely made it easier for audiences to follow. The former had also opened on December 1st, 1971, which was almost 8 months after the latter opened. Which meant that Two Gentlemen of Verona was fresher in people's minds by the time the Tony Awards took place on April 23rd, 1972. While some shows have still managed to win Best Musical nearly a year or so after opening on Broadway before and since then, they've usually been smash hits that were still selling out during awards season like South Pacific, The King & I, The Pajama Game, Damn Yankees, My Fair Lady, Hairspray, and Hamilton. As I've already mentioned in the paragraph above, Follies was not accomplishing either of those feats at all.

In the end, Two Gentlemen of Verona won 2 Tonys for Best Musical and Best Book of a Musical (John Guare & Mel Shapiro). In fact, it is the third to most recent show to have won Best Musical and only one other award. The following two were Raisin (which only also took home Best Lead Actress in a Musical for Virginia Capers) in 1974 and 42nd Street (which only also took home Best Choreography for Gower Champion) in 1981. After the 1972 Tonys, Follies ended up closing at a monumental loss on July 1st of that year after 522 performances. Meanwhile, Two Gentlemen of Verona ended up running for 614 performances after closing on May 20th, 1973.

Though in the years since, Follies has endured more through several of its songs becoming standards, two major Broadway revivals, and regional productions all over the world. With Two Gentlemen of Verona, that show to date has only returned to New York once back in 2005 through a production that was presented by the Public Theater for their Shakespeare in the Park series. It featured a cast that included Norm Lewis, Oscar Isaac, Rosario Dawson, Renée Elise Goldsberry, Paolo Montalbán, Mel Johnson, Jr., and John Cariani. However, the one Best Musical nominee from 1972 that has probably had the longest shelf life is a show that didn't win anything. Yet it has proven to be very popular in the years since thanks to a hit 1978 film adaptation, a 2016 Emmy-winning live telecast, and constantly gets produced in schools, community, and regional theatres all over the world. I'm not sure if anyone has ever heard of this show, it's called Grease.
Proudly powered by Weebly
KARE REVIEWS