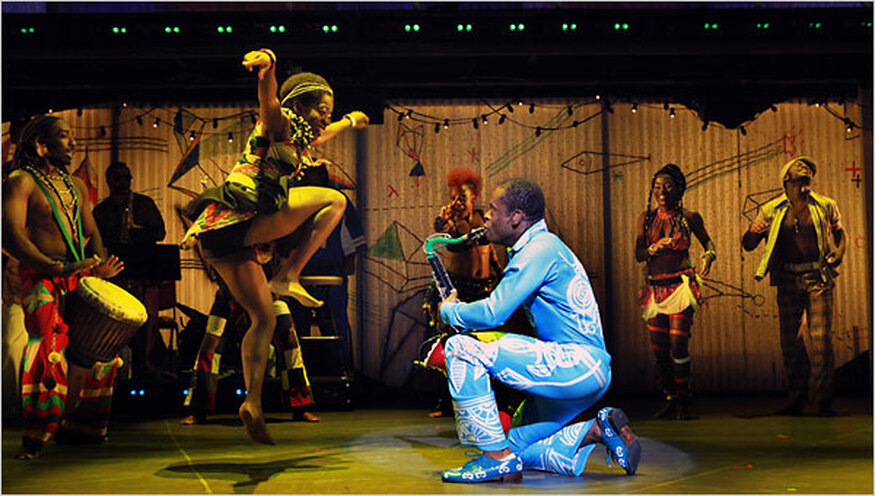 Welcome back to my 'And the Tony Almost Went to...' series, where I take a deep dive into a show that was the (likely) runner-up in the Best Musical race of any previous Tony Awards year. Every week leading up to this year's telecast, I'll be covering each of the remaining runners-up from this past decade that I haven't already. This week, we'll be starting with the very beginning, 2010.
Fela!​ is based on events in the life of groundbreaking Nigerian composer and activist Fela Anikulapo Kuti. This musical portrays Kuti in the days when he was the target of 1,000 government soldiers assigned to end his public performances at the legendary Lagos nightclub The Shrine.

​After having premiered Off-Broadway at 37 Arts Theatre B in September of 2008, the production later opened on November 23rd, 2009 at the Eugene O'Neill Theatre on Broadway. The original cast included Sahr Ngaujah as Fela Anikulapo-Kuti, Saycon Sengbloh as Sandra, and Lillias White as Funmilayo. In fact, the Broadway production also had support from Jada Pinkett Smith and her husband, Will Smith, as well as Jay-Z. Each of them served as producers on the show.

Yet, despite coming into the season as a frontrunner, it could not overcome the underdog that was...
Why Didn't Fela! Win?: Despite a lot of theater people rooting for the show to succeed on Broadway, it still spent months struggling to find an audience. As we've seen in the past, Tony voters don’t like to waste any major awards on a production that hasn't been doing well at the box office. It's also worth noting that in the 2009-10 Broadway season, all the theater critics and reporters lost their Tony voting privileges as a "conflict of interest". Which meant that most of the remaining Tony voters were producers, theater owners, and presenters of touring productions. So there was the sense that they were going to champion shows in which they have financial stakes. Not to mention that the presenters of touring productions who were voting probably felt that Fela!​ would never have a successful tour.

Meanwhile, Memphis was an original musical that had a long journey to Broadway with a series of four out-of-town tryouts before finally arriving in October of 2009. Despite receiving mixed critical reviews and opening in a season filled with other jukebox shows such as American Idiot, Come Fly Away, and Million Dollar Quartet, Memphis​ became the little show that could. Like Fela!​, it also spent months struggling at the box office. Yet, thanks to its presence on the Tony Awards, Memphis became a hit. The show won 4 awards for Best Musical, Best Book of a Musical (Joe DiPietro), Best Original Score (David Bryan & Joe DiPietro), and Best Orchestrations (David Bryan & Daryl Waters). The touring presenters who voted for it probably felt that Memphis would be a much easier sell on the road than Fela!​. Though the following season, members of the New York Drama Critics Circle were welcomed back into the voting body.
Proudly powered by Weebly
KARE REVIEWS