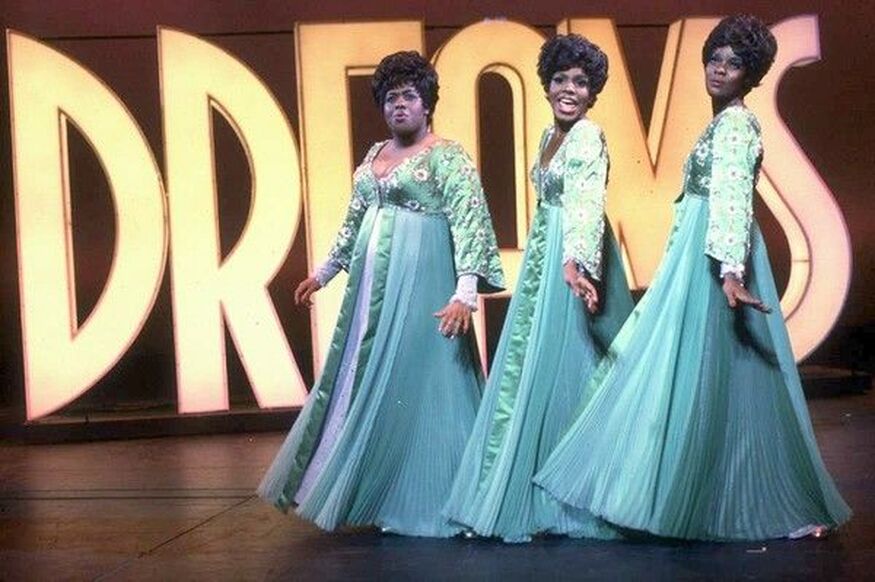 Welcome back to my 'And the Tony Almost Went to...' series, where I take a deep dive into a show that was the (likely) runner-up in the Best Musical race of any previous Tony Awards year. Whether any of you may or may not have already heard, all of Broadway has been shutdown until further notice due to the coronavirus pandemic. As a result, this year's Tony Awards have been postponed indefinitely. While it's probably gonna be a long wait until this pandemic clears up, something I am planning to keep everyone occupied in the meantime is more features in this series. Today, we'll be talking about 1982.
Based on the show business aspirations and successes of R&B acts such as The Supremes, The Shirelles, James Brown, and Jackie Wilson, Dreamgirls tells the story of a young female singing trio from Chicago, Illinois called "The Dreams", who become music superstars. Through gospel, R&B, smooth pop, disco and more, this musical explores themes of ambition, hope, and betrayal, all set in the glamorous and competitive world of the entertainment industry.

The project originally began in 1975 when playwright Tom Eyen was working on a musical adaptation of his play, The Dirtiest Show in Town, with conductor Henry Krieger. Appearing in the show was a young actress by the name of Nell Carter. Her performance inspired Eyen and Krieger to write a musical about back-up singers. The show was workshopped by Joseph Papp with Nell Carter starring alongside Sheryl Lee Ralph and Loretta Devine as her groupmates. Yet, the musical ended up getting shelved when Carter departed in 1978 to appear in the soap opera, Ryan's Hope. Though after catching the interest of director/choreographer Michael Bennett, who at the time was in the midst of his success with A Chorus Line, the project was brought back to the table.

​Yet, despite becoming the hit of the 1981-82 Broadway season, it ended up losing out to the late-breaking underdog that was...
Why Didn't Dreamgirls Win?: In what was probably one of the most famous Tony races for Best Musical, there were two first class original productions directed by titans of the musical theatre going head-to-head. Dreamgirls was directed & (co-)choreographed by Michael Bennett while Nine was directed by Tommy Tune. Not to mention that at the time, both shows were literally playing right next to each other. As for how the outcome turned out the way it did...

​Nine (which was a stage musical adaptation of Federico Fellini's 1963 Academy Award-winning semi-autobiographical Italian film, 81/2) opened on what was the Tony Awards cut-off date that year, which was May 9th believe it or not. While that idea was gimmicky, what it did mean for the show was that reviews would be out the next morning and Tony nominations would be announced later in the afternoon. Press agent Judy Jacksina came up with that idea as she knew that if Nine received many nominations, they would take over the newsstands in order for the show to make a splash in a field dominated by Dreamgirls.

When Tony nominations were announced, Dreamgirls was up for 13 awards while Nine was up for 12. Despite the latter show not becoming an instant hit both critically and commercially, it still generated strong word of mouth in theater circles during previews from people who were seeing the show. Audiences were impressed with Tommy Tune's stunning, cinematic staging and composer/lyricist Maury Yeston's lush musical score. The producers then decided to capitalize on their 12 Tony nominations by treating Nine as if it were a massive hit, ignoring the mixed reviews and poor ticket sales.

​At the ceremony, the final award of the night, Best Musical, was presented by Lena Horne. At that point in the evening, Dreamgirls had already won 6 prizes while Nine took home 4. When Lena opened the envelope to announce the winner, she looked up to the audience (and camera), surprised, to say "Nine". That show ended up winning 5 Tony Awards for Best Musical, Best Featured Actress in a Musical (Liliane Montevecchi), Best Direction of a Musical (Tommy Tune), Best Original Score (Maury Yeston), and Best Costume Design (William Ivey Long). There may be a lot more to what happened behind the scenes, but I can't include every single detail. So for those who are interested in learning more about this, you can read about it in Chapter 20 of Michael Riedel’s book, Razzle Dazzle: The Battle for Broadway.

​​Though what is interesting is that both shows went on to receive movie versions in the 2000s helmed by people involved with the 2002 film adaptation of Chicago. Dreamgirls was brought to the big screen in 2006, written & directed by Bill Condon (who was the screenwriter of Chicago), and was quite successful both critically and commercially. The film also won 3 Golden Globes (including Best Motion Picture-Comedy/Musical) and was nominated for 8 Academy Awards, winning 2 (including Best Supporting Actress for Jennifer Hudson for her performance as Effie White). Meanwhile, Nine was brought to the big screen in 2009, directed & (co-)choreographed by Rob Marshall (who was the director/choreographer of Chicago), and ended up being both a critical and commercial disappointment. Though the film still received 5 Golden Globe nominations (including Best Motion Picture-Comedy/Musical) as well as 4 Academy Award nominations (including Best Supporting Actress for Penélope Cruz for her performance as Carla Albanese).
Proudly powered by Weebly
KARE REVIEWS