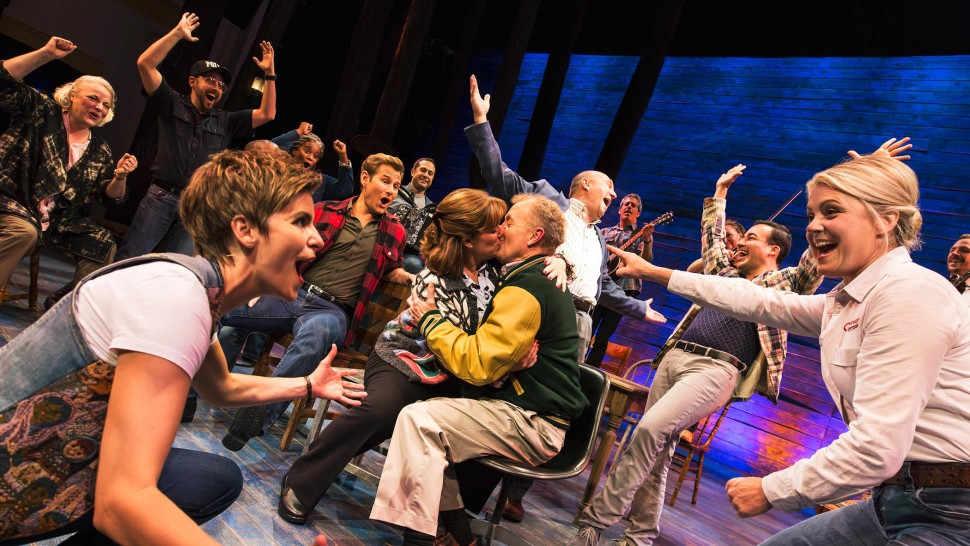 Welcome back to my 'And the Tony Almost Went to...' series, where I take a deep dive into a show that was the (likely) runner-up in the Best Musical race of any previous Tony Awards year. Originally, I was planning to cover Come From Away sometime soon. However, the Olivier Awards just took place, where the West End production took home 4 awards (including Best New Musical). So how about we now take a look back at how well the hit musical did at the Tonys?
Come From Away is based on a true story of when the isolated community of Gander, Newfoundland played host to the world. What started as an average day in a small Canadian town turned into an international sleep-over when 38 planes, carrying thousands of people from across the globe, were diverted to Gander’s air strip on September 11th, 2001. Undaunted by culture clashes and language barriers, the people of Gander cheered the stranded travelers with music, an open bar, and the recognition that they’re all part of a global family.

Before arriving on Broadway, whenever people heard about this musical, they thought it had no chance in hell of ever succeeding. They assumed that audiences were just going to write it off as "the 9/11 musical".​ Especially given that Come From Away was an original musical not based on any pre-existing property with a cast that consisted of 12 people, all of whom were playing multiple roles, and none of them were these big deal Broadway performers.

​After a series of four out-of-town tryouts, Come From Away opened on March 12th, 2017 at the Gerald Schoenfeld Theatre on Broadway. The original cast included Petrina Bromley as Bonnie & others, Geno Carr as Oz & others, Jenn Colella as Captain Beverly Bass/Annette & others, Joel Hatch as Claude & others, Rodney Hicks as Bob & others, Kendra Kassebaum as Janice & others, Chad Kimball as Kevin T./Garth & others, Lee MacDougall as Nick/Doug & others, Caesar Samayoa as Kevin J./Ali & others, Q. Smith as Hannah & others, Astrid Van Wieren as Beulah & others, and Sharon Wheatley as Diane & others.

*denotes an award it won.
​
Yet, despite becoming one of the surprise hits of the season, it could not overcome another surprise hit which also became a huge part of the cultural zeitgeist.
Why Didn't Come From Away Win?: This was a very competitive race for Best Musical. Early on in the season, people thought it was going to be between Dear Evan Hansen and Natasha, Pierre, & the Great Comet of 1812. They were both Off-Broadway hits that made very successful moves to Broadway when each of them opened in the fall. Then in the spring, Come From Away came in and way surpassed everyone's expectations. It not only became a critical darling, but also a huge hit at the box office. So going into the Tonys that year, the race was shaping up to be between Come From Away and Dear Evan Hansen​. What was especially exciting about it was that both of them were completely original musicals.

According to the New York Times' survey, voters were evenly divided. They thought Dear Evan Hansen was heart-wrenching, but some found it to be morally off-putting. It had long been the awards season favorite. It was the best-reviewed new musical of that season, and was making more money than many thought was possible for a small show about a tough subject with an unfamiliar title and no celebrities. Several of the voters that were interviewed said they were particularly impressed that the show had been attracting a relatively youthful audience, which is always a challenge for Broadway. One voter specifically said to the Times "I haven’t seen a more original, beautifully produced musical in ages. These are the kinds of things you pray for if you know anything about musicals."

Meanwhile, Tony voters thought Come From Away was inspiring, but some said that it was treacly. The show had been selling well thanks to strong word-of-mouth and probably benefited from its timing. Though it was written long before Donald Trump even became a presidential candidate, its celebration of global community and its depiction of how people can welcome strangers had been interpreted by many as an antidote to the xenophobia of the Trump era. Another voter specifically said to the Times "I sat there with tears in my eyes. It left me with a hopeful view of humanity, which I think we need right now."
​
​In the end, Dear Evan Hansen won 6 Tony Awards for Best Musical, Best Lead Actor in a Musical (Ben Platt), Best Featured Actress in a Musical (Rachel Bay Jones), Best Book of a Musical (Steven Levenson), Best Original Score (Benj Pasek & Justin Paul), and Best Orchestrations (Alex Lacamoire). I should also point out that I was actually in the audience at Radio City Music Hall that year, and watching the awards unfold was really interesting.

While a lot of people (myself included) did predict Dear Evan Hansen would win Best Musical, we also predicted Come From Away would win Best Book as its token prize. Though Jenn Colella was very competitive for Best Featured Actress in a Musical. In fact, Tony voters really had such an amazing opportunity to spread the wealth among the nominees for Best Original Score. Benj Pasek & Justin Paul were already winning that award for Dear Evan Hansen, and they could’ve given Best Book of a Musical to Irene Sankoff & David Hein for Come From Away and Best Orchestrations to Dave Malloy for The Great Comet.

​After Pasek & Paul won Best Score on the telecast, Steven Levenson won Book for Dear Evan Hansen during commercials. In the next commercial break, Best Orchestrations was presented. A lot of predictors thought that race was between The Great Comet and the most recent Broadway revival of Hello, Dolly!​. Yet, when Alex Lacamoire pulled off an upset for Dear Evan Hansen, it was starting to become clear which direction the Best Musical race was heading in. After Rachel Bay Jones beat Jenn Colella for Featured Actress in a Musical, things weren't looking good for ​Come From Away.

​By the time Best Direction of a Musical was presented, I was hoping that my prediction (Rachel Chavkin for The Great Comet) would be correct, but I was starting to get a feeling that Michael Greif was going to win for Dear Evan Hansen​. Yet, when Christopher Jackson announced that the winner was Christopher Ashley for Come From Away​, that had to have been the biggest surprise of the night to me. I also wondered if the show still had a chance of winning Best Musical (which it obviously didn't). At least Come From Away​ didn't end up going home empty-handed after all.

Update: Since the 2017 Tony Awards, both shows went on to recoup their Broadway investments, and continue to be successful through various productions all over the world. Not to mention that the Broadway staging of Come From Away received a proshot taping that is now available to stream on Apple TV+ while Dear Evan Hansen received a feature film adaptation from Universal Pictures with Ben Platt reprising his role as the title character.
Proudly powered by Weebly
KARE REVIEWS