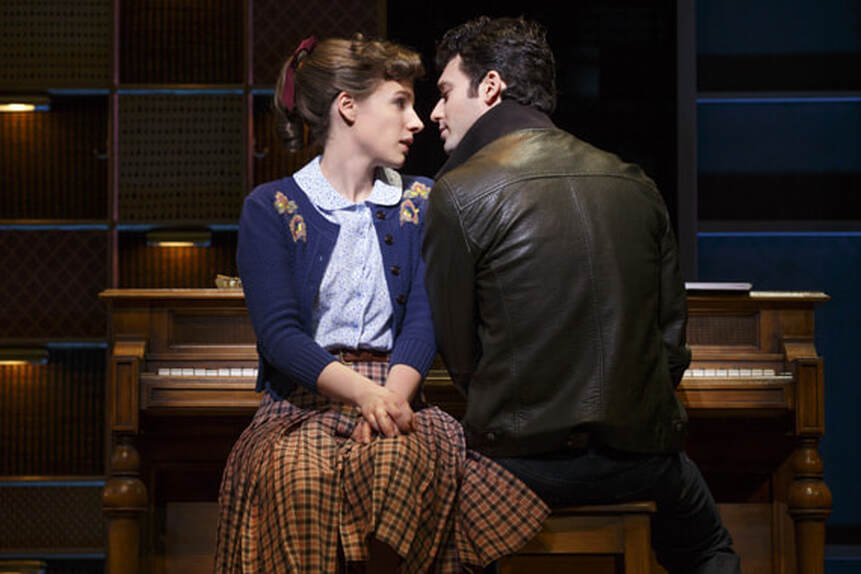 Welcome back to my 'And the Tony Almost Went to...' series, where I take a deep dive into a show that was the (likely) runner-up in the Best Musical race of any previous Tony Awards year. This year, Jessie Mueller has earned her fourth Tony nomination for her performance as a young woman who gets pregnant by her abusive husband in the Broadway revival of Carousel. She has pretty much been nominated every two years since 2012. Today, we'll be looking back at the show that made Mueller a bonafide Broadway star (which was another role as a young woman who gets pregnant by her abusive husband) as well as its success at the Tonys.
Beautiful tells the inspiring true story of Carole King when she was starting out as a teenage songwriter at 1650 Broadway in the 1960s. Back then, she was writing songs in collaboration with her husband at the time, Gerry Goffin, for so many different musical acts such as Bobby Vee, The Drifters, The Shirelles, Little Eva, The Chiffons, The Beatles, and The Monkees. That was all before she went on to become one of the most successful singer-songwriters in music history.

Going into the 2013-14 Broadway season, there were a ton of buzzy new musicals coming in that year such as Big Fish, The Bridges of Madison County, Bullets Over Broadway, If/Then, and Rocky. Yet, they all didn't appear to have lived up to everyone's expectations. Beautiful on the other hand, wasn't really on top of anyone's radar. For one, it was a jukebox/biomusical, and the industry can be pretty on the fence about them. The production also didn't necessarily have an A-list creative team either. It was the first Broadway directing job for Marc Bruni, who had previously worked as an assistant for Jerry Zaks, Kathleen Marshall, and Walter Bobbie. It was also the first Broadway credit for veteran screenwriter Douglas McGrath, who earned an Oscar nomination in 1995 for co-writing the original movie of Bullets Over Broadway with Woody Allen.

​​*denotes an award it won.

Going into the Tonys, Beautiful was posing as a threat to win Best Musical as it was gaining more momentum at the box office. Yet, it couldn't overcome the snob hit of the year that was...
Why Didn't Beautiful Win?: While the musical did end up becoming a surprise hit of that season, it still received mixed reviews from critics. They liked the performances, but felt that Douglas McGrath's book was pretty formulaic. While A Gentleman's Guide to Love & Murder was the best ​reviewed new musical of the 2013-14 season, that show spent months and months struggling at the box office until it received 10 Tony nominations, which was the most for any Broadway production that year.

According to the ﻿New York Times' survey﻿, because of how much Gentleman's Guide had been a box-office dud for most of its run, some tour presenters outside New York — who make up about 10 percent of Tony voters — said they voted against the show to prevent it from hitting the road and possibly flopping in their theaters. Meanwhile, Beautiful had a powerhouse performance by Jessie Mueller as Carole King, and was reportedly the most emotionally moving of the four Best Musical nominees. Yet, jukebox shows like Beautiful rarely win, and several voters said the show was a Carole King nostalgia trip more than an artistic achievement. Though on Tony night, Gentleman's Guide ended up winning 4 awards for Best Musical, Best Direction of a Musical (Darko Tresnjak), Best Book of a Musical (Robert L. Freedman), and Best Costume Design of a Musical (Linda Cho).

Apparently, Beautiful lost for the same reasons why Newsies didn't win Best Musical two years before. Since the show was already guaranteed to have a successful life beyond Broadway, Tony voters probably felt that it didn't need the recognition while Gentleman's Guide needed it more. After all, immediately after the Tonys that year, the box office for the latter show improved significantly to become a commercial hit in its own right, and turned a profit in the end.

While I can understand all those politics, I didn't think Gentleman's Guide deserved Best Musical at all as I thought that show was way overhyped. I would've been happy to have seen something else like Beautiful or Aladdin​ win the Tony that year. While neither of them are particularly groundbreaking pieces of theatre, I think they're both great at what they set out to do, which is giving audiences some great crowd-pleasing entertainment.
Proudly powered by Weebly
KARE REVIEWS